An inspiring yet imperfect biopic of a man more complex than he appears here.
Brett McCracken|November 26, 2013
Image: The Weinstein Company
Idris Elba in 'Mandela: Long Walk To Freedom'
Our Rating

Some biopics of towering historical figures focus on rather narrow episodes of the subject's life (see Lincoln, The Queen, and so on). But Mandela: Long Walk to Freedom opts to cover nearly all of Nelson Mandela's life as a lawyer, anti-apartheid political leader, and South African icon.

Normally this approach falters, simply because that breadth almost always means sacrificing depth in a two- or three-hour film. A person's entire life—full of episodes, rabbit trails, and a tangled web of complexity—does not always translate cleanly to a focused, insightful feature-length screen portrait. The best biopics often focus on one period in a person's life to showcase their character and complexity—the early career of Johnny Cash (Walk the Line), Truman Capote's writing of In Cold Blood (Capote), or Nelson Mandela's recognition that the 1995 Rugby World Cup was an opportunity to help heal his post-Apartheid nation (Invictus). 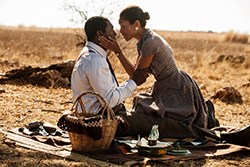 Mandela: Long Walk to Freedom, directed by Justin Chadwick (The Other Boleyn Girl), takes the long-view approach to the life of Mandela (Idris Elba), as its title implies. Based on his 1994 autobiography of the same name, Mandela covers about 50 years of the man's life, from his childhood as a herd boy in South Africa's rural Cape region, to his rise as an Apartheid resistance leader. Mandela was then a prisoner for three decades before ascending in 1994 to the South African presidency as the nation's first black president, elected in the nation's first fully representative, multiracial election.

In this case the long view approach (mostly) works, given the single-minded focus at its core. Mandela wants freedom for his people. That is what drives him (and the movie). It's a classic movie redemption arc: the oppressed and subjugated in search of freedom and justice. And Mandela's is one of the most compelling of all redemption tales.

How should an oppressed people group—like black South Africans under Apartheid—push back against their oppressors? Should violence be met with violence? Is the path of nonviolent reconciliation too slow and soft?

This is one of the tensions of Mandela—and indeed a tension within Mandela himself. As a young lawyer and activist, Mandela is at first committed to fighting for freedom through nonviolent means. But gradually he becomes more militant and guerilla in his tactics, ultimately resulting in his arrest and imprisonment.

During his long tenure in prison (27 years), Mandela's wife Winnie (Naomie Harris) carries the militant torch and is intermittently arrested and jailed herself. When Mandela is finally released from prison in the early 90s, he's firmly committed to peace, reconciliation, and forgiveness. But this is hard for Winnie to take. She's not ready to forgive and reconcile. Justice and retribution are more attractive to her; she's suffered too much at the hands of hate. Eventually this leads to her separation from Nelson.

Winnie and Nelson's divergent paths make for a convenient (if somewhat obvious and simplistic) juxtaposition to highlight the film's themes. What's fascinating about where Nelson lands is that he of all people, having been imprisoned for nearly three decades in the prime of his life, would seem justified in rage and militancy. But instead he comes out of prison and forgives his captors and white oppressors, urging his fellow black South Africans to do the same. The film is imperfect, but at least it is a compelling picture of the power and freedom that comes through forgiveness.

What Mandela lacks is a sense for who Mandela really is. We understand the injustice that drives him and the struggles he and his people endure during their "long walk to freedom." But who is Mandela the man?

Idris Elba delivers a fine, sometimes brilliant performance. But the audience is rarely invited into the man's interior world. The film is too busy covering its prodigious narrative ground.

And its credibility suffers a bit from its too obvious hallowing of the hero: aside from some womanizing tendencies, Mandela appears to lack any detectable flaws. That halo around him makes him even less relatable. We relate to the idea of Mandela, and we like the reconciliation which he comes to symbolize, but the man himself feels abstracted—too iconic, too perfect to be real. 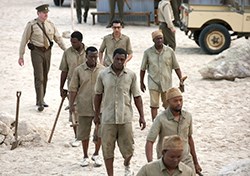 In some ways, Mandela has become almost a caricature of feel-good geopolitical activism, a grandfatherly advocate for all things love, peace, and "we are the world" togetherness. And at times, this feels like exaggerated, naïve optimism—in the film's last line, Mandela says, "People must learn to hate, and if they can learn to hate, they can be taught to love, for love comes more naturally to the human heart than its opposite."

Is that true? Because from what I read in the Bible and know of my own depraved heart, hate seems to be our more natural bent. Mandela is right that love can be learned. But it is not something that comes naturally. It only becomes natural by God's grace and the Holy Spirit's power. We love because He first loved us (1 John 4:19). We trust the inherent goodness of humanity—and its power to redeem itself—at our own peril.

Mandela is a good-hearted film, and a welcome change from the bleak fare that often characterizes "awards season." But is it too good-hearted? Perhaps we are too cynical these days to believe in such a straightforward story of goodness and reconciliation.

Yet despite our skepticism, something about Mandela still clicks. I think it's the collective groaning for justice that we all feel, the longing we all have for shalom to overtake strife. What Mandela did in South Africa wasn't perfect, but it was at times exactly the sort of healing, reconciliation work that provides glimpses of the kingdom of God.

Mandela: Long Walk to Freedom is rated PG-13 mostly for instances of violence: beatings, shootings, dead bodies in the streets, massacres of protesters by armed guards, and so on. None of the violence is particularly explicit by today's standards, however. The film also contains a couple instances of non-explicit sex, and some brief strong language.