Perhaps Robert Redford's greatest performance - while stranded on a boat in the middle of the sea.
Mark Moring|October 18, 2013
Image: Daniel Daza / Roadside Attractions
Our Rating

In Ernest Hemingway's 1952 classic novel The Old Man and the Sea, there is a moment when, in the midst of a mighty struggle with a huge marlin, the title character turns to God.

"I am not religious," he says aloud, alone in his skiff, holding the line, hands bleeding, muscles aching, as he battles the great fish. "But I will say ten Our Fathers and ten Hail Marys that I should catch this fish. And I promise to make a pilgrimage to the Virgin of Cobre if I catch him."

In the newly released All Is Lost, the protagonist—another old man in his own protracted, perilous war against the sea—also has a word with the Lord. Sort of.

At a critical moment when all certainly seems lost, the man, disheartened and desperate, utters one of the only two words he will say in the entire film. Head bowed, he moans, "God." Is it a prayer of despair? A cry for mercy? Or for a miracle?

There's hardly time to ponder these possibilities—mere seconds, at the most—before the man lifts his head, looks to the heavens, and screams one word at the top of his lungs.

And that—"God" and an f-bomb—is all the dialogue in this riveting 107-minute drama, starring Robert Redford, 77, as a man sailing solo on the Indian Ocean when his boat runs into one problem after another.

The film begins with Our Man (which is how Redford's character is identified in the credits) asleep below deck of the Virginia Jean, his 39-foot sailing yacht. He is awakened by water rushing into the cabin; he has crashed into a large shipping container floating in the sea, leaving a gaping hole in the side of his boat.

We quickly learn that Our Man is a seasoned skipper ... 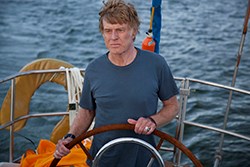