But as much as I sat amused (occasionally highly amused) for 136 minutes, I never felt particularly engrossed or even all that thrilled. The stakes were too low. The hero's fate, the fates of his co-heroes, the fates of the villains and the fate of mankind were never much in doubt.

And that's a bit of a problem. 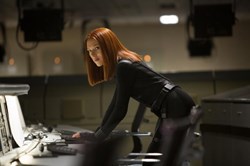 That's not to say the film is not enjoyable. It's a lot of fun to watch Steve Rogers, aka Captain America (Chris Evans), team up with vampy Black Widow (Scarlett Johansson), wing-man Falcon (Anthony Mackie), ringleader Nick Fury (Samuel L. Jackson) and other agents of S.H.I.E.L.D. as they fight to save the world (again). It's also fun to see the various baddies — including chief baddie, the mysterious Winter Soldier himself (Sebastian Stan) — try and fail to vanquish the good guys. The plot takes intriguing twists and turns and (under-)utilizes the formidable talents of Robert Redford.

One of the marks of a great film is how much it makes a palpable, physical, real impact on me as I watch it, whether it be holding my breath in tension, unconsciously welling up with tears, gripping my seat handles, or simply losing any sense of time and place because I'm so lost in the world of the movie.

The film is essentially a blitzkrieg of bombs, blasts, and bullets from start to finish, a cornucopia of knives, guns, and techy displays of military-industrial might, interspersed with kicks, punches, flips, fist-fighting, and all manner of martial arts. The Nazis and Soviets are referenced, as are terrorists and WMDs. There are double agents aplenty, corrupt senators, Wikileaks allusions, war veterans support groups, and Cold War-era bunkers. Set in Washington D.C., the spy/sci-fi/superhero film is a cinematic fireworks show inspired by the last 75 years of American military history. It's loud, proud, and full of explosions.

So why does it all feel so tedious?

As the film progressed I began to understand. Amidst the nonstop barrage of bullets and bombs, something was conspicuously absent: blood and bodies. Feeling. Pain. Sure, some characters get bruised or scratched. A few occasionally wince. Once or twice we worry that one of the heroes might be mortally wounded.

But [spoiler alert] they always bounce back. Always. Even after being pummeled by a bionic metal arm, shot in the chest by sniper's bullets, electrocuted or thrown from a skyscraper, our heroes emerge largely unscathed, ready to resume their world saving.

Not only does this sap the film of much force and lower its stakes, but it also reflects a pretty puny understanding of embodiment. Sure, the heroes of Soldier are fine physical specimens. They are muscle-bound and fit. The film's opening sequence highlights this by showing Captain America running at about 30 miles per hour along the Potomac, far outpacing his by-no-means-out-of-shape friend Sam (Mackie).

But the indestructibility of these bodies and their depiction as mostly machine-like instruments of war imbues them with a dehumanized abstract-ness. Aside from "human weapon" behavior, we never see these characters do bodily things: eating, drinking, sleeping. There's no charge of human-ness to these bodies; even the romantic chemistry that is occasionally hinted at feels forced, akin to the awkward human-to-human contact in Spike Jonze's Her. At one point Captain America jokes that he "had a big breakfast," but this is the only hint we get that he is in fact the type of being who needs to eat.

Part of what works so well about the action films of, say, Quentin Tarantino, is that they have a decidedly enfleshed aesthetic. Tarantino's characters eat and drink constantly. They are hungry and they seem to enjoy food (burgers, fries, sushi, strudel). They sweat, they fear, they are broken and can (and often do) die in all sorts of way that foreground the body's breakability. Not only do films like this pack more of a visceral punch, but they also support a more realistic view of embodiment and what I see as a more incarnational respect for physical reality.

To me, the pre-serum weakling Steve Rogers is more interesting that the fighting machine Captain America. The limitations of embodiment reflected in the former feel more real than the indestructibility of the latter. But maybe there could be a happy medium? Would it be too much to ask Marvel to make its god-like heroes a bit more fragile? And could we maybe have a few less fight sequences and more scenes where we observe the characters' humanity?

In Soldier, for example, a more developed romantic interest for "Cap" would go a long way. So would more humor. The whole "1940s good 'old boy transported to 21st century world" conceit could be mined for laughs much more than it is, making the character of Rogers far more relatable. The Iron Man films, it seems to me, do a pretty good job of making Tony Stark human precisely because they emphasize human sorts of things like laughter and (to a lesser extent) love.

Soldier is too concerned with setting up plot points and showy action sequences to go deep into any character's human-ness. Furthermore, there's simply too much at stake (future movies and billions of dollars for Marvel) to do something truly daring or unexpected.

After Christopher Nolan's Dark Knight trilogy raised the "grittiness" bar for superhero films and attempted a sort of realism previously alien to the comic book movie genre, any subsequent superhero film must at least dabble in darker moral questions or visceral street-level action. The Winter Soldier dabbles in both, though in rather uninspiring ways. The film explores questions of encroached-upon liberty under the guise of "freedom" with a veiled critique of Patriot Act-era America, as does The Dark Knight. And also like Nolan's film, Soldier tries to amp up the non-CGI action quotient with high-octane street chases and hand-to-hand combat shot with schizophrenic, blunt-force camerawork. Most of this is supremely entertaining, but little of it packs a visceral punch. And that's a shame. 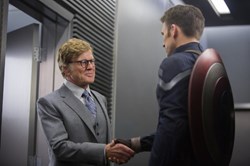 At its best, cinema engages us not only cerebrally but also physically, making us think but also sweat, squirm, and squeal. This is because cinema has the power to confront us with our own embodiment, leading us to identify and vicariously experience the pains, pangs, emotions and longings of our fellow man. In this way it can help us develop empathy, self-awareness, appreciation for both the beauty and fragility of the body, among other good things.

But when a film makes its human characters super-human or even pseudo-human (what sort of being is the bionic "Winter Soldier" anyway?), much of this potential is squandered. The relatable becomes abstract and our understanding of embodiment is further confused. For Christians who believe the true God became flesh and dwelt among us, and that he breathed and broke as we do, such diminishments and distortions of embodiment should raise flags.

Captain America: The Winter Soldier is a violent film from start to finish, packed with all manner of gun-fighting, fist-fighting, car-fighting, and most other kinds of fighting. That said, none of it is particularly bloody or graphic. This might be even more disturbing, however. As mentioned in the above review, the film's violence is ubiquitous but seemingly has no devastating effects on any one. The cumulative effect is disturbing and desensitizing, less graphic but more ho-hum about violence than your average horror film.

Brett McCracken is a Los Angeles-based writer and journalist, and author of the books Hipster Christianity: When Church and Cool Collide (Baker, 2010) and Gray Matters: Navigating the Space Between Legalism and Liberty(Baker, 2013). You can follow him @brettmccracken.