In which myth becomes a mess.
Sørina Higgins|December 15, 2014
Image: Warner Bros.
Martin Freeman in 'The Hobbit: The Battle of the Five Armies'
Our Rating 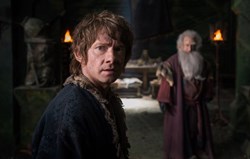 Martin Freeman and Ken Stott in 'The Hobbit: The Battle of the Five Armies'

This final film in the Hobbit movie series is more thoughtful than the first two, and it’s compelling cinema, but it lacks a sense of closure.

As a matter of fact, like the others in the series, this last Hobbit movie is a bit of a mess. There are so many plot threads that scenes are short, following one another in quick, confusing succession. Action scenes dominate, with fights drawn out to laughable lengths. The screenplay is poorly written, as packed with clichés as a preteen paranormal romance.

And yet, some elements of the messiness serve a surprising purpose: they reveal the film’s intelligent interactions with the source text and deepen its emotional impact.

The movie opens exactly where The Hobbit: The Desolation of Smaug left off: the dragon is on his way to attack the town of Esgaroth on the lake. People flee in terror, while Bard the Bowman struggles to escape from prison in order to fight the dragon. The rest of the movie is taken up with the dwarf king Thorin Oakenshield’s dragon sickness, the greed of the elven king Thranduil, the desperation of the displaced people of Lake-town, and the hobbit Bilbo’s attempts to make peace among them.

This already complicated situation gets even messier when members of the White Council—Gandalf, Saruman, Elrond, and Galadriel—gather to drive Sauron the Necromancer out of his stronghold at Dol Guldur and learn that he has long been planning to send two enormous armies of orcs to wipe out the elves, dwarves, and men around the mountain kingdom of Erebor. The violence that ensues takes up most of the screen time, punctuated by a few quieter scenes in which Martin Freeman (as Bilbo) and Richard Armitage (as Thorin) get to show off their serious Shakespearean acting skills.

To put it bluntly: what this Hobbit needed was more hobbit.

Hugo Weaving in 'The Hobbit: The Battle of the Five Armies'

Yet this is not a brainless action movie. One silly accusation that is often brought against Tolkien’s work is that his moral universe is too black and white. Spend a few minutes on any Tolkien-related chat forum and you’ll bump into people claiming that Tolkien’s good guys are too good and his bad guys too bad.

This is, of course, nonsense: any thoughtful reader notices Gollum’s struggle with the remnants of conscience in his corrupted mind; Frodo, Gandalf, and Galadriel’s fight against the lure of the ring; and Boromir’s decline from a position of ethical superiority into groveling threats of force. These are merely a few examples from The Lord of the Rings. The text of The Hobbit is simpler, yet even there the moral landscape is intricate. Bilbo is the hero, yet he is a thief. Thorin is the rightful king, yet he is degraded by dragon sickness and greed. The moral complexity of this children’s story goes so far as a threatened battle among allies, each fallen from their original goodness into blind desire.

The Hobbit: The Battle of the Five Armies film enacts this moral ambiguity in dramatic, powerful ways. The titular battle is very messy—physically and visually confused. Gone are the clean galloping lines of the Pelennor Fields or the single stronghold of Helm’s Deep. Here, before the gate of Erebor, neat ranks of elves, dwarves, and orcs rapidly mix, and the fighting sloshes into the ruins of Dale. The moves and counter-moves are difficult to follow, especially as allies and enemies are not distinguished by color. The armor of the dwarves and of the orcs are both of a dull grey, and when their forces meet, they become one vast, grim, struggling mass. Fog and snow obscure the scene. This is no “just war” forced upon the righteous men of Numenor by an unequivocally evil tyrant: this is an unreasoning struggle precipitated by greed on all sides.

Cate Blanchett and Ian McKellen in 'The Hobbit: The Battle of the Five Armies'

Similarly, the tragic deaths with which the story ends descend from their mythic status in the book into the squalid and the sordid in the film. This is one major problem with marketing any page-to-screen adaptation: all readers have pictured the scenes and characters differently in their imaginations, and therefore the images on the screen will inevitably not match up with how they pictured them. This leads to dissonance and usually to a negative judgment.

Yet, to take this one step further, the filming of any given scene puts it into the particular: into one specific setting of landscape, weather, lighting, music, staging, blocking, and so forth. In C.S. Lewis’s phrase, “myth becomes fact.”

Many readers have found that when they read Tolkien’s Hobbit, its story takes hold on their minds as the great myths have done. Bilbo takes his stand beside the great heroes of the past (even if his head only reaches to their knees). Gandalf joins Merlin as another iteration of the “Senex” or “Wise Old Man” Jungian archetype. Smaug competes with Beowulf’s dragon and with Fáfnir of Norse legend for the title of Most Famous Literary Dragon. And the terrible deaths of beloved characters at the end of the battle occupy the heroic space of knights in shining armor breathing their last on the field of Camlann as Arthur sails away to Avalon for healing. 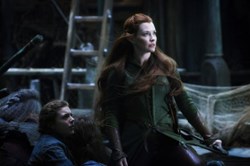 Evangeline Lilly in 'The Hobbit: The Battle of the Five Armies'

Not so, in Peter Jackson’s films. One of these killings is a horrific murder, not a battlefield death. While the others are the result of fair fights, they all happen far from the main conflict, shrouded in fog and surrounded by ice. There is no glorious beam of sunlight breaking through the clouds. The music does not soar to reassuring heights.

Lewis wrote that “Myth is the mountain whence all the different streams arise which become truths down here in the valley.” This could be applied to adaptation. In our imaginations, the story is a lofty mountain of abstract glory. On the screen, physical necessity can drag it down into the gory details of sensory particularity. By becoming “history”—the visual and auditory reality of a movie made in a particular time and place by particular actors—it may cease to be myth and dwindle to “fact.”

This isn’t necessarily a critique. Jackson could have chosen to film the deaths as glorious battlefield sacrifices. He did not, and his choice emphasizes the moral ambiguity of the story. Characters chose greed over generosity and violence over peace. Why, then, should their deaths be heroic? Why should their endings satisfy?

But the many endings of this film are unsatisfactory. There are many pieces of unfinished business, many story threads left unraveled, and many questions left unanswered. There are important objects whose location is unknown, characters whose fates are uncertain, and political decisions unmade when the credits role. There are discontinuities between the stories told in the theatrical releases vs. the extended editions of these films.

These are serious flaws in the filmmaking, as is the rushed and abrupt nature of Bilbo’s return journey. This third film was originally entitled The Hobbit: There and Back Again. Seeing that the “back again” takes up only a couple of minutes of screen time and the battle takes a couple of hours, The Battle of the Five Armies was a much more suitable title. The movie closes with Bilbo’s discomfort, now that he is back in the comforts of home. The violence he has seen and in which he has participated has alienated him from domesticity.

'The Hobbit: The Battle of the Five Armies'

But the alienation the viewer experiences at the close of the movie is problematic. The larger difficulty here is the one created by the order in which Jackson made his movies. Since the story of The Lord of the Rings happens later, according to internal chronology, it makes sense that the Hobbit movies are open-ended: one should go on to watch LOTR afterwards.

But then there are serious inconsistencies of plot, character, and cinematography between the two series, so it is better to watch LOTR first and The Hobbit after—and be left with a let-down of an ending. It’s not much of a swan song from the man who has spent more than fifteen years with these books.

There is, of course, lots of battle violence in The Hobbit: The Battle of the Five Armies. There are many beheadings of orcs, some of which are supposed to be funny. The action-and-fantasy-violence takes up most of the screen time. There is some blood, mostly shown as the aftermath of injuries and deaths rather than in the moment (especially when a frozen waterfall begins to flow with blood). Much of the violence is creepy and disturbing. There are a few mild curse-words and one very mildly coarse joke.

Sørina Higgins is an English teacher, writer, editor, and Inklings scholar. She writes “The Oddest Inkling,” a blog devoted to the work of Charles Williams; works as a Preceptor at Signum University’s Mythgard Institute, teaches English at Lehigh Carbon Community College, hosts Ekphrasis: Fellowship of Christians in the Arts, and serves as the Review Editor of Sehnsucht: The C. S. Lewis Journal. She lives in Pennsylvania and tweets @sorinahiggins.