If a Brand-New Christian Women's Conference Goes Viral, Then What?

Ask author and Bible teacher Jennie Allen how she came to create the most popular interdenominational Christian women's event in years, and she'll stumble to answer.

Ask how she gathered tens of thousands of Christian women—live in Austin, Texas, and online across the globe—around the idea of pursuing spiritual calling, and she won't have the words.

Like the people who witnessed miraculous outcomes in the Bible, all Allen can do to explain the success of last weekend's IF: Gathering is point to the work of the Holy Spirit. "The whole thing has been completely unexpected to me," she said. "It felt like fish and loaves."

The first-time event had a vague premise—If God is real, then what?—and no speaker lineup when announced this fall, but sold out in 42 minutes, forcing organizers to coordinate local watch parties across the U.S. and 22 other countries to accommodate interest.

During the simulcast over the weekend, 40,000-plus locations streamed the women's conference, while 1,200 people attended the event at the Austin Music Hall—pumped with worship songs and decorated with crafty, Pinterest-inspired details: farm tables, mason jars, and strings of twinkling antique lights. #IFGathering trended on Twitter throughout the weekend, ranking among the top hashtags used around the world.

The two-day event featured discussions of calling by women across workplace and ministry settings, plus biblical teachings from women like Christine Caine, international speaker from Hillsong Church; Jen Hatmaker, Christian blogger and author of 7; Ann Voskamp, author of A Thousand Gifts; and Shelley Giglio, a leader alongside her husband Louie Giglio at Passion City Church. 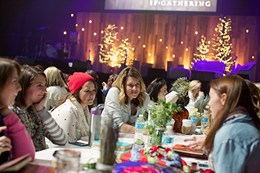 IF: Gathering combined a unique scriptural message with viral marketing through online networks. Several months before the event, Allen brought together 60-some influential bloggers and leaders from across churches, denominations, and theological positions, convinced that God was calling her to rally for unity among the splintering factions of the church. Those women, including Hatmaker (a friend of Allen's and fellow Austinite), generated interest among their readers, enough to fuel the event's popularity throughout Christian blogs and social media.

IF focused distinctly on spiritual formation, with both inspirational and practical takeaways. Based on the directive in Hebrews 12 to "throw off everything that hinders" and "run with perseverance the race marked out for us," dozens of speakers encouraged women to chase their calling.Since the event details were kept secret, IF attendees were drawn to the overall concept, rather than popular speakers "from their camp" or sessions on hot topics, said Amy Brown, IF communications director.

"I hear enough people telling me how to be a good Christian mom. I don't need that," said Andrea Burkly, a Catholic who traveled from Wheaton, Illinois, to attend the Austin event. "This is a call for revival and unity, and it lined up with what's in my heart right now."

In between sessions, the mostly-young crowd discussed with each other their own sense of calling as well as hindrances such as fear and comparison. They worshipped together with hands lifted high and kneeled to pray for the Holy Spirit's guidance. 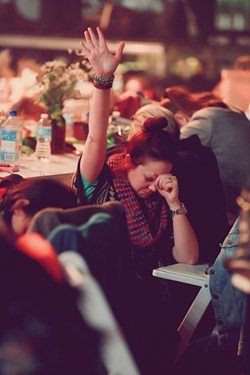 The origins of IF, as well as Allen's recently released book Restless, date back to 2007, when she woke up in the middle of the night with the vision to "gather, equip, and unleash" this generation of Christian women. Allen, 37, holds a master's in Biblical Studies from Dallas Theological Seminary and had been a stay-at-home mom leading a women's group at her church Austin Stone, an Acts 29 congregation.

Since then, she published a series of Bible studies through Thomas Nelson and built up the connections necessary to organize a movement around that initial vision, one she sees echoed in the words of her friends—new and old—across the Christian blogosophere.

"We've been slow to step into our giftedness or strengths. For a long time, that wasn't an option," said Allen. Now, though, "there is something happening in our generation, and I believe it's a manifesto in a way, a call for us to link arms and to spend our lives beautifully and well for the glory of God."

Following the debut event, IF has launched a Bible devotional called IF: Equip and plans to continue local gatherings to connect women with calling in the context of their communities.

If a Brand-New Christian Women's Conference Goes Viral, Then What?