What four siblings (and their parents) thought about a movie about animated squirrels (and other creatures) surviving the winter.
Benjamin, Claudia, Olivia, and Luisa Johnson|January 20, 2014
Image: Redrover Co., Ltd. / ToonBox Entertainment
Our Rating

Editor's Note: To review the latest animated film marketed at families, I decided to call in the big guns - four siblings who like to watch and talk about movies. What follows is their take, with some help from their parents.

The Nut Job follows the adventures of woodland creatures in a big city park who are desperate to survive the winter. After the entire winter supply of food is destroyed, the animal community blames and banishes a greedy self-centered squirrel named Surly (voiced by Will Arnett) from the park.

Alone, tired, and scared in the big city, Surly stumbles upon a dream come true: a nut shop. While he's planning to rob the nut shop, we quickly learn the shop owners were hardened criminals attempting to rob the bank across the street.

Meanwhile, worried about starving over winter, the park creatures make a daring attempt to find nuts in the big city. Andy (Katherine Heigl), the squirrel chosen to go search for food, meets Surly while he is planning to rob the nut shop, and Surly makes a deal with Andy.

Though they are suspicious of each other, Surly must work with his old park community to steal food for the winter while the humans work to steal the money from the bank. Throughout the rest of the story, The Nut Job shows how various trials reveal the true moral strength of the park's animals, with unexpected results.

Some of the most entertaining characters were the sidekicks and supporting actors. Precious (Maya Rudolf), the robber's guard dog, and a clueless self-loving squirrel named Grayson (Brendan Fraser) were the most humorous creatures in the movie. Though silent, both the plump quirky cardinal and the kind loyal rat named Buddy were also among our favorite characters. The film ... 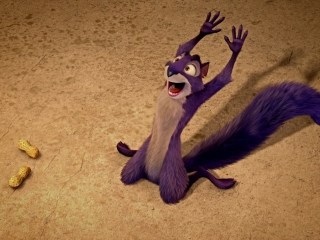