Silence makes people speak, as I pointed out last week—but it also conceals. So it has been in the universe of The Leftovers, in which the town of Mapleton (and we) have got to be wondering: is the continued silence from God/the universe about where their loved ones went a way to make them cry out, or is it concealing something? And if it's concealing something, what is that thing? Is it God refusing to tell them why they are still there? Is it God refusing to tell them what happened? Is it some other odd, weird, supernatural disappearance in which the perpetrators aren't talking?

Or is it concealing the fact that there is no reason at all, and nobody's listening?

At the beginning of this episode, Gladys—a member of the GR—is spirited away, duct-taped to a tree, and stoned by mysterious dark figures. The blood stains her white garments. Those stones forcing her to break her silence and plead for mercy, which never comes.

That death shocks the GR (although the townspeople seem considerably less shocked), including Laurie, who reacts so violently that she has a panic attack and winds up in the hospital. In response, Patti takes her to a motel, and then, to breakfast—in normal clothes, and with talking. Laurie can't break her silence, but she listens. Patti tells her that Gladys had a similar experience a year ago, that she was beginning to buckle. And then she ominously warns Laurie—more on that in a moment.

Meanwhile, across town, Kevin continues to take the brunt of the universe. Poor guy can't catch a break: everything in his life keeps disappearing and reappearing. It wasn't just that bagel. His family continues to slowly disappear on him, his home security ... 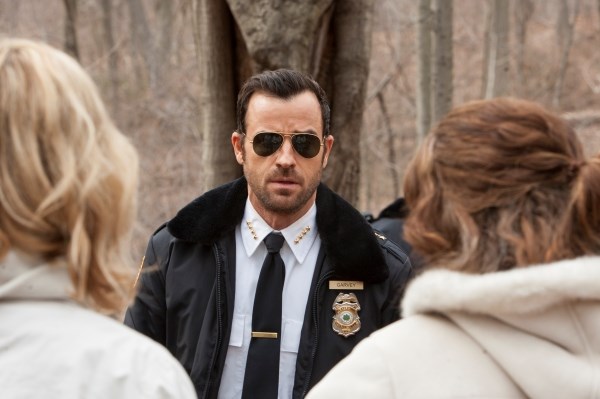