A heartfelt, clear-eyed tribute to Roger Ebert - and the form he pushed forward.
Alissa Wilkinson|July 3, 2014
Our Rating

To be a movie critic writing about Life Itself is to feel a ghost looking over your shoulder—but then, writers are a haunted bunch. You can pretend they're the friendly spirits of those whom you admire and want to emulate. But really, they're the specters you're terrified of disappointing.

So it's a double whammy to write about this movie, a documentary about the life of Roger Ebert and based on his memoir by the same name. There's not a movie critic working today in English (and, I'd guess, a few other languages) who doesn't owe Ebert some debt. Ebert wrote about movies for the Chicago Sun-Times and then his blog for nearly fifty years, and along with Gene Siskel on their show At the Movies, his way of thinking and talking about movies profoundly influenced what Americans went to see at the theater for decades. (They quite literally invented the legendary "two thumbs up!" movie poster tagline.)

Directed by Steve James (Hoop Dreams), the film traces the contours of Ebert's life, from his youth in working-class Chicago through his years as a swaggering college newspaper editor turned storytelling tavern-goer into his career with the Sun-Times and on television and, finally, his personal life, including his marriage to his wife Chaz and relationship with her children and grandchildren. The filmmakers began making the movie while Ebert was in the hospital, and he appears in it throughout. They didn't know he'd pass away while they were still shooting.

That Ebert died on April 4, 2013 adds pathos and heft to the film, no doubt, but even without that element it's affecting—the sheer span of history it recounts boggles the mind. It's also funny and ... 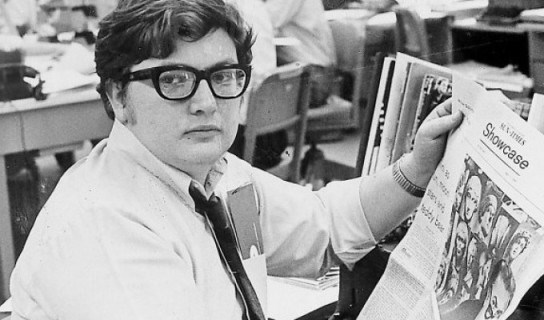