The latest installment's failure to actually focus on its characters is a giant, ironic misstep.
Jackson Cuidon|May 23, 2014
Image: 20th Century Fox
'X-Men: Days of Future Past'
Our Rating

X-Men: Days of Future Past is a disappointing entry in a film series that now stretches back 14 years and almost half as many movies. It's disappointing mostly as a matter of pedigree; had Days of Future Past been made right after, say X-Men 3: The Last Stand, or the regrettable X-Men Origins: Wolverine, Days would seem like a genuine improvement. As it stands, though, the movie suffers from its placement after 20th Century Fox's two most recent X-Men knockouts—the surprisingly adroit X-Men: First Class in 2011, and 2013's (and this reviewer's favorite X-Men iteration) The Wolverine.

The greatest irony of Days is that it wouldn't seem half so bad if it weren't for the presence of movies like The Wolverine, which make explicit the problems that are implicit in movies like Days and The Amazing Spider-Man 2.

But first, some plot: it's the indeterminate future, and everything is awful. The X-Men—a team of super-power wielding mutants—have been hunted almost to extinction by the Sentinels, giant metallic robots whose only purpose is to eradicate all mutant-kind.

If the scenery is to be believed, much of the future exists as a kind of post-apocalyptic waste; it's only in a secret base that the X-Men have managed to stake out a brief foothold, while trying to figure out how to stymie the robotic onslaught. Professor X (Patrick Stewart) concocts a plan: the X-Men will send Wolverine's (played a record-breaking eight times by Hugh Jackman) mind back into the past so that he can prevent the creation of the Sentinels—but to do so, he'll need to unite Charles Xavier (James McAvoy) and Erik Lehnsherr (Michael Fassbender), who have become enemies following the events ... 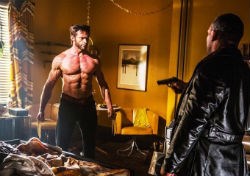