Not a "Christian movie." Not even close.
Jackson Cuidon|October 2, 2014
Our Rating

This is not the Left Behind movie anyone expected.

The last time the property was in the public eye—2005, with the release of the third movie installment, Left Behind: World At War—the movies had Kirk Cameron and spanned the first two books in the Left Behind series of novels. For those not participant in the 90s/00s evangelical zeitgeist, the Left Behind books were basically the handbook of American folk-Christian eschatology in the new millennium. The books covered—from the perspectives of pilot Rayford Steele, his daughter Chloe Steele, and reporter Buck Williams—the End Times.

Left Behind, in a sense, tackled the apocalypse before it was cool.

And tackling the apocalypse is once again aggressively cool, as we’ve said here before. Since the films stalled in 2005, and this year Hollywood has finally caught onto the fact that Christian movies will make you a lot of money, a reboot was practically a given, nestled amongst Noah and Heaven is For Real and God’s Not Dead and the forthcoming Exodus: Gods and Kings. 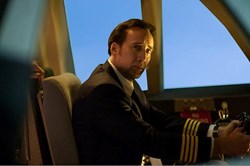 Nicolas Cage in 'Left Behind'

Right now I want to take a tiny break and make explicit what I think is already pretty clear: I was not an unbiased reviewer going into the movie. In fact, part of why I wanted to cover Left Behind was that I had so many feelings about the books—strong ones, at that.

Growing up, I was horrified at the idea that the books were supposed to represent my positions, or the positions of most other Christians. From my vantage point, the Left Behind books were venues for the Good Christian Main Characters to look good, without really ever doing anything particularly Christlike. They were only likable by being inoffensive to your average reader—and “inoffensive” probably isn’t a good way to determine whether or not they’re “likable.” (Remember: Jesus offended the devout more than he did the irreligious.)

So I was ready to be upset about this movie, is what I’m saying—upset at a movie based on books that I felt totally mischaracterized my faith, books whose central characters were trumpeted as the saints of the new world but who constantly failed to live out anything marginally resembling real Christianity.

I was ready to be upset because the Left Behind books were not Christian.

They talked about Christianity, sometimes. But, at their core, they were political thrillers, featuring characters directly transposed from better Tom Clancy narratives—still violent, hostile, and un-reflecting, they just prayed a little more and took communion sometimes. (This may be unfair to Clancy.)

I was ready to be upset at this new movie because certainly it would have all those same faults. But it doesn’t. It has many, many faults, and almost no positives, but purporting to be Christian while not actually being Christian is not one of them.

I will bold this next point so that readers now searching desperately for the vanished comments section can take note: Left Behind is not a Christian Movie, whatever “Christian Movie”could even possibly mean. 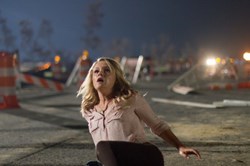 Cassi Thomson in 'Left Behind'

What it isn’t: a rehash of Fireproof or Facing the Giants or God’s Not Dead or any number of movies not just “for Christians,” but for Christians who want a Christian Movie badly enough that they’re okay with sacrificing quality to get it. (Note that the original Left Behind movies belong in this category too. Also note that I have no personal beef with Kirk Cameron, despite his association with most of these films; it must be coincidental.)

What the film is: “Left Behind: The Ride of the Movie.” I was shocked when, a full 110 minutes after beginning the movie (105 of which could be excised without loss), we ended at a narrative point near the beginning of the first Left Behind novel. Where’s the Antichrist? Where’s this and that character?

This movie cares about none of that stuff. It cares about the thrill of a plane crash, explosions, cars soaring off bridges, chaos, panic, and disaster.

The Left Behind movie, then, has the same relationship with Christianity that the Left Behind books did. The books used Christianity as a setting, but the real intrigue was political, or situational. How will they make it out of this? How will they stop the bad guy? What happens to the good guys? This stuff is closer in line with the structure of the Harry Potter books than any kind of Biblical narrative.

The books favored political intrigue, a form that better suited the medium of books; the film, in response, is just a run-of-the-mill disaster flick, where the Rapture is the MacGuffin driving the plot. Consider: one of the characters proposes that the Rapture was caused by aliens, and the movie would be no different if this were true.

Or consider this line from director Vic Armstrong:

[My agent] David Gersh said, “Well, what about the religious aspect?” And I said, “What religious aspect?” He said, “Didn’t you find it strange when people disappeared on the plane and everything?” I said, “David, I did Starship Troopers, and I didn’t question it when great big bugs came climbing over the hill and ripped people’s heads off. That’s the world I live in!”

In fact, most Christians within the world of the movie—whether the street-preacher lady at the airport or Rayford Steele’s wife—are portrayed as insistent, crazy, delusional, or at the very least just really annoying. Steele’s wife’s conversion to Christianity is shown to have pushed her and her husband apart; we see that she’s decorated her house with crosses, throw-pillows that say “Pray” across the front, and encouraging posters.

That is the deepest conception of Christianity that this movie has: posters, pillows, and crucifixes. 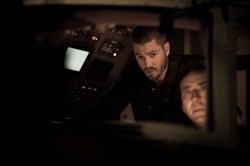 Chad Michael Murray and Nicolas Cage in 'Left Behind'

If the Left Behind books were just pulp novels injected with Christianity, then the Left Behind movie is just a disaster flick injected with the slightest, most infinitesimal amount of Christianity possible. This is, in one way, good—no one needs to be upset, or get angry, or be offended, or question their beliefs, or the beliefs of those around them, or anything, because the film takes no stance on anything. The film is so inept, confused, and involuted that there’s no danger of even accidentally cobbling together something that could necessitate a defense of Christianity.

You know how you feel when you hear the name of your hometown, and your ears perk up, and you want to talk about it? Or a band you love, that means a lot to you? Or a book that changed your life? We all bond over these little things, which become pieces of us, which we want to represent, which we want to support somehow, any way we can.

This isn’t a bad thing.

Nicolas Cage and Nicky Whelan in 'Left Behind'

What’s a bad thing is that Hollywood producers now know that American Christians feel that way about their faith—that Christians so desperately want to participate in the mainstream, that they’re tired of having sanctioned music that’s like other music and movies like other movies and politicians like other politicians but always still being on the outside, that Christians just want to feel identified without having to carve out little alcoves or niche markets that exist alongside the Big Boys. And, now that they know it—that is, now that they know they can make back 5x their initial financial investment—they want to exploit that, by pumping out garbage (not moral garbage, just quality garbage), slapping the “Christian” label on it, and watching the dollars pour in.

They want churches to book whole theaters and take their congregations, want it to be a Youth Group event, want magazines like this one to publish Discussion Questions at the end of their reviews—want the system to churn churn away, all the while netting them cash, without ever having to have cared a shred about actual Christian belief.

They want to trick you into caring about the movie. Don’t.

(We tried to give the film zero stars, but our tech system won’t allow it.)

A note from the author: I realize that I likely have different views about the Left Behind books than many readers—so let me say this. I don’t dislike the books because I believe the authors intended to exploit anything (they’re unlike the movie producers in that way), or because I dislike Christianity. Instead, it’s an emotional, knee-jerk defensiveness I feel when I read what I feel is a shallow interpretation of an endlessly deep faith.

As such, people who like or who’ve been positively impacted by Left Behind aren’t wrong, I don’t think; that just wasn’t my experience. And I don’t want to discount the experience of anyone who disagrees with me. What’s important is that my reaction is against what I see as an inauthentic representation of faith (though not inauthentic faith on the part of the authors, to be very clear)—something I think Christians of all stripes and denominations can agree they’ve felt at one time or another. There’s a defensiveness inherent to something actually being a part of you, part of your identity—and I ask readers to take that into consideration.

This film contains maybe the most offensive depiction of a Little Person that I’ve ever seen in any form of media; he is angry, short-tempered, thieving, accusatory, and generally a bad person, and the film strongly implies all this is predominately due to his stature. At the end of the film, he is punted down a slide like a football. I don’t need to defend any position that this film is as un-Christian as you can get, given its depiction of this character. It’s either a joke on the part of the filmmakers—in which case it’s not only horribly misguided, but actually deserving of an apology on their part—or some other kind of moral or intellectual failure by all involved. But whatever it is, it is the most mean-spirited, insensitive, idiotic thing I’ve seen in my tenure reviewing for Christianity Today.

Maybe a few instances of third-tier swear words, like d—m or h—l. A character plots to have an affair; another presumably injects drugs in an airplane bathroom (the usage isn’t shown).

Jackson Cuidon is a writer in New York City. He tweets sporadically at @jxscott.