Blake Lively turns in an exquisite performance. The plot, however . . .
Kenneth R. Morefield|April 24, 2015
Image: Lionsgate
Michiel Huisman and Blake Lively in 'The Age of Adaline'
Our Rating

The Age of Adaline is a bit like a student who hums along for three quarters of the semester doing “A” work and then totally bombs the final exam. She may have banked enough points to earn a passing grade, but somehow that “C+” feels more disappointing than does the “D” earned by her classmates who never really exerted themselves. 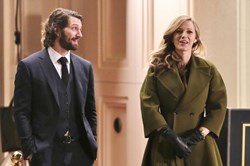 Michiel Huisman and Blake Lively in 'The Age of Adaline'

Adaline Bowman (Blake Lively) is a quiet, unassuming librarian with a fantastic secret. Born in 1908, widowed in her late twenties, she experienced an accident where something “almost magical” happened. As a result, she stopped aging. That the film realizes that any pseudo-scientific explanation it would offer for its magical realism will sound silly—and yet feels compelled to offer one anyway—might be the clearest indication that it doesn’t know what genre conventions it wants to use.

The movie is best when it’s being an allegorical romance—much like Hawthorne’s short fiction. Allegories are less concerned with how a fantastic situation came about, more interested in what that situation reveals about human nature. Like fairy-tales, they are supposed to give us a sharper-than-usual focus through which we can look at the kinds of conflicts humans are always experiencing.

Adaline’s dilemma, like the ones vampires created by Anne Rice or Stephanie Meyers experience, is that being a lonely immortal forces her to be physically withdrawn and emotionally isolated. Anyone she shares her life with might learn her secret. Her daughter must lie about her identity to forestall questions about Adaline’s frozen beauty. Even her dog, who’s supposed to give some sense of connection, grows old and threatens to leave her alone. By constantly moving from place to place to preserve her anonymity, she becomes the living embodiment of modern alienation.

The film begins with Adaline on the verge of moving again, this time from San Francisco to Oregon. But just as she is about to leave, she is spotted at a party by Ellis (Michael Huisman). He is one of those too-perfect movie guys who is emotionally available, resilient in the face of continued rejection, handsome, financially well off, and somehow still single. Adaline is clearly attracted to Ellis, but she has told herself for so long that a relationship is impossible that the bonds of fear and habit may now be too hard to break.

If every major plot development in the film is telegraphed and obvious, the first two acts are nevertheless engaging for their leisurely pace, quite tone, and Blake Lively’s exquisite performance. She portrays Adaline’s age with a slow, deliberate cadence and a refusal to over-emote. “I think your food is burning,” she tells Ellis at his apartment, with a matter-of-fact quietness that conveys someone who has seen too much and feels too stretched to invest energy in life’s little ups and downs. 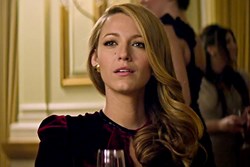 Blake Lively in 'The Age of Adaline'

Those little ups and downs are the fabric of our lives, though, and refusing to have them is a bit like living in purgatory. If the first half of Age of Adaline allows Lively to convey that through performance, the back half decides that it better tell us in case we haven’t been paying attention. “I’m tired of running,” she tells her daughter, adding about the possibility of love that “it’s not the same when you have no future.”

In trying to convince Adaline to pursue love, her daughter tells her, “You’ve lived, but you’ve never had a life.” I think maybe I would disagree with that assessment if I could figure out what it means. Increasingly the scenes look and sound like Cliff’s Notes summaries of the conversations rather than actual dialogue. Wouldn’t mother and daughter have had most of these conversations already?

To discuss the film’s last act would involve unnecessary and superfluous plot spoilers. Suffice to say, I spent the last thirty minutes saying “please don’t go there” and the last ten saying, “oh, really, please, please, please, don’t go there!” For all the film’s magical powers, it could not hear me begging in my seat. The climactic scenes are almost all about plot. They involve a flashback that is both unnecessary and strangely uninteresting. Just before the end, the movie’s deux-ex-machina resolution feels like a cheat, since it allows the film to show us Adaline’s choice but not have to describe, depict, or imagine the consequences of that choice. Finally, a postscript gives dramatic evidence of what we’ve already figured out and assumed the characters already knew.

And yet I would gladly buy the film’s DVD to just bathe in the little human exchanges and the nuances of Blake Lively’s acting. Long after the silly dialogue fades, I’ll remember Adaline guiding a blind friend’s hand to a wine glass, the look on her face as she sees an abandoned ship in an unlikely place, and the way she pretends to not be able to keep herself from laughing at a joke she’s heard before. It’s a virtuosa performance, and it makes the film worth seeing.

The MPAA rating for Age of Adaline cites a “suggestive” comment as the primary reason for its PG-13 rating. Whatever that comment was, I missed it. Adaline and Ellis kiss several times and are shown in bed together in a morning after (implied sex) shot. There is no foreplay or nudity depicted. In a flashback we see Adaline drink some kind of alcohol from a bottle to steady her nerves as a large cut on her hand is stitched. Younger adolescents may find scenes between Adaline and a sick pet a little harder to handle than any of the scenes between grown-ups. Two scenes involving automobile accidents are a little scary, but not gory.