Jupiter Ascending is, unfortunately, neither exceedingly good nor excessively bad. Pre-release hype pinned it down as one or the other—either a return to form by the Wachowskis (of Matrix fame) or another conceptually-vacant eyesore. But it’s actually an overstuffed response to the more fantastical instances of the Marvel movie franchise.

It's as if the Wachowskis saw what Thor got away with (silly aliens, dynastic rivalries, re-writing the history of earth, elaborate mythologies, and enough Freud to confuse you for a lifetime) and said, "Hey, we want to do that." 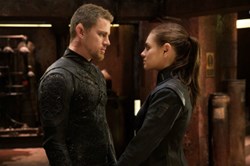 The plot concerns the semi-orphaned Jupiter Jones (Mila Kunis, whose character's name is just one of the many comic book-alike elements to the movie), an illegal immigrant to the U.S. from Russia following the murder of her father. He was obsessed with astronomy, and Jupiter follows in his footsteps.

What a coincidence, then, that the stars come down to her, in the form of Channing Tatum's Caine, a human-wolf hybrid bounty hunter. (Note that "human-wolf hybrid bounty hunter" is going to be one of the less-silly sentences in this review.) Some of the most powerful entities in the galaxy want Jupiter for some unspecified reason, and it's up to Caine to keep her safe.

Jupiter Ascending never really manages to reconcile its tonal dissonance, which it clearly tore from the playbook of movies like Thor. On the one hand, the movie is a grand space opera, with orange-lit vistas of spaceships emerging from Saturn-like rings. And on the other hand, it is, for its first 45 minutes or so, an earth-bound character-focused comedy. Mila Kunis plays her Jupiter as a real-seeming person, but not as an especially deep or multifaceted one—so her interactions with Caine, a Stranger With A Dark Past And Secrets To Hide, fall short.

It also never reconciles the outlandish and the familiar, the personal and the pan-galactic, or the irreverent and the straight-faced. The last of these is maybe the most pressing issue for Jupiter Ascending; there was laughter during its most self-serious moments, and a lack thereof during its attempted humor.

Examples of the former: Eddie Redmayne's entire performance, which (I'd put good money on it) will sink his Oscar contention faster than a few micro-scandals sunk Selma; the long-awaited shot of a soldier unfurling his cybernetic wings; Caine's usage of anti-gravity boots, which never stops looking like someone edited Whip It in Photoshop. The list goes on.

Maybe what went most wrong with Jupiter Ascending is that these two elements—the outlandish and the familiar—never came together organically. At one point, a character remarks that it's crazy to assume that in the whole universe, only Earth evolved life—is it that much crazier to assume that other places would've evolved humor as well? 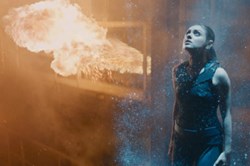 Space is a dead-serious affair: from Redmayne's whispered performance and Freudian obsession to the reptilian Flying Monkey-alikes, everything that should be tinged with a hint of whimsy, well, isn't. Earth is the light-hearted planet, apparently, and everywhere else is Serious Business.

And rather than emphasizing the best qualities of seriousness and lightheartedness, the harsh divide between the two just confuses the script. When a character says something ridiculous, are the writers in on the joke? The answer seems like it's yes something around 50% of the time, which is an absolutely terrible batting average for joke intentionality.

This all depends on your own personal threshold for ridiculousness; for instance, Thor is, in my mind, the ideal balance between groundedness and ridiculousness. However, a group of my personal friends are convinced I'm dead wrong on this point, and they have good reasons. But the tonal dissonance in Jupiter Ascending has got both such a high frequency (a lot of whiplash) and amplitude (very serious to very silly) that it's almost impossible to keep it together.

When, at one point in the film, our heroes think all is lost, one alien—who has the head and features of an elephant—trumpets out a dejected blast. How am I supposed to not laugh at that?

Jupiter Ascending is just an action movie at heart. It’s marketed as a sci-fi (and might kill big-budget sci-fi), but it's hard to imagine this movie, Blade Runner, Alien, and Alphaville all sharing the same designation. Like Avatar before it, Jupiter Ascending is a fairly run-of-the-mill action movie wearing the costuming of an elaborate sci-fi movie. It doesn't attempt to deal with the conceptual questions or difficulties that sci-fi does at its best.

The film’s artwork—though astonishing and note-worthy from an "Effort expended" perspective—also lacks a certain spark that comes from real care for the images and artistry. The special effects rarely manage to feel more than perfunctory, scenes taken from old films and vistas that are now familiar to people who love science fiction. For a film whose visuals may be its only saving grace, they're certainly spectacular—but not awe-inspiring, or particularly original, or love-filled. Just another average thing in a deeply average movie.

Jackson Cuidon lives and works in New York City with his wife Sarah and a constantly rotating selection of coffee beans. Follow his semi-annual updates on Twitter @jxscott