I had to move all the way to New York City before I realized how not-okay it was that most black people in my small North Carolina hometown lived in a sector everyone called Black Bottom.

And as a teenager, I struggled over whether it was okay, theologically, for interracial couples to marry. My pastor preached that mixing races was sinful—an unequal yoking. Something we should be ye not.

One of my best friends had one white parent and one black parent, and I used to ask God, “Which side is she supposed to choose?” Segregation officially ended in the 1960s. I had this experience in 2007.

Then I lived in Washington Heights for a year, a mostly-Dominican neighborhood in northernmost Manhattan, and started going by the name “Hey White Girl.” I realized the South isn’t the only place where race affects communities.

I’m not alone. Everyone seems to be trying to figure it out. Are all the advertisements diverse enough? Does a black man have the same opportunity for a work promotion as a white man? Does Taylor Swift’s new music video have an appropriate balance of twerking blacks and whites? Are the Oscars too white?

That tension keeps showing itself in movies and television, too, which is why, as a student studying culture and an aspiring writer, I wonder how writers can speak well about demographics to which we don’t belong. Am I allowed to speak about things that don’t have anything to do with growing up in the South, or being in college, or being a young white American female? Is it wise, if I want to love my neighbor well?

In 2013, the Oscar-winning 12 Years a Slave reminded everyone that slavery happened a long time ago, and that it was horrible. But ... 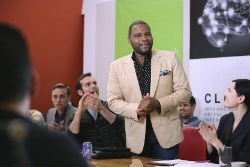