A retelling of the famous 1971 experiment that is still every bit as relevant today.
Kenneth R. Morefield|July 17, 2015
Image: Spencer Shwetz / IFC Films
'The Stanford Prison Experiment'
Our Rating

The Stanford Prison Experiment is an effective, but not satisfying docudrama about the famous 1971 “experiment” in which psychology professor Philip Zimbardo transformed a building at Stanford University into a mock prison and had test subjects role play as prisoners and guards. 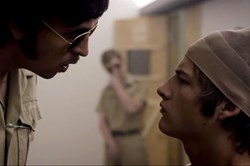 I put the word “experiment” in scare quotes because, as a colleague of Zimbardo points out in the film, the exercise is more of a simulation than a scientific experiment. There is no control group or variable. Rules governing the study, such as no hitting allowed, are quickly abandoned. Zimbardo himself participates rather than observes, pushing the subjects assigned to the guard roles to take control. When one participant asks to see a doctor he is returned to the experiment and told that prisoners do not get paroled for having stomach aches.

Zimbardo’s experiment is often discussed in psychology classes and textbooks. Even if it is not good science, it is a powerful case study that provided a lifetime of anecdotal pseudo-evidence for anyone who wasn’t convinced by Stanley Milgrim’s demonstrations that we all conform to circumstances and obey authority more than we think we do.

And if the film is accurate, I have a hard time understanding why Zimbardo was not himself jailed. Certainly if a student participating in my class assaulted another student and I condoned it, I have a hard time believing I wouldn’t be at least fired. When his female junior colleague confronts “Phil” with her assessment that the experiment is immoral, it is supposed to be some sort of jarring epiphany. Perhaps it was . . . in 1971.

But after Abu Ghraib, after Taxi to the Dark Side, can any of us really say we’re surprised by any of this?

(Aside: if the film mentions that Zimbardo’s study was funded by the Office of Naval Research, I missed it. It certainly doesn’t dwell on that fact, nor the troubling questions that might be raised by it.)

The movie is hampered, unfortunately, by its too-tight focus on the participants. It tells us what happens, but refuses to give much thought to what any of it signifies, or what lessons we might draw from it. An African-American observer gives in to anger when one subject assigned to the role of prisoner claims that he “doesn’t know what it’s like in there.” We learn that the man did fifteen years in San Quentin, and the brutality of that experience has hardened him towards those who are just now being initiated into the unfair ways the world is structured. One observer (either a priest or pretending to be one) opines that the experiment might just “teach these boys of privilege what a prison is.”

Every time someone in the movie reflected on the study, my interest perked up. In these moments the film sounds more sober and important that it ultimately proves to be. But such observations prove to be drop-ins, rather than fully developed themes, and following through on them is dismissed in favor of another psychological conflict between subjects playing guards and their increasingly frightened victims.

These are admittedly all well done, but they begin to blur together—not just with each other, but with other movies, like Brubaker, Papillon, 12 Years a Slave, The Deer Hunter, and, of course, Cool Hand Luke. When people have absolute power over other people, restraints and reservations about abuse quickly evaporate. People do things under color of authority they would not believe they are capable of in other circumstances.

If the film is a mile wide and an inch deep, I’ll admit that every mile of that inch is perfectly executed. The confrontations between guard subjects and prisoner subjects are genuinely riveting. The Stanford Prison Experiment could easily be one of those films (like Taps or School Ties) that we look back on in ten years and gape at the number of future stars assembled. Tye Sheridan, so good in Joe and Mud that he almost makes you forget he debuted in Tree of Life, continues to impress with each new challenge. Ezra Miller backs up his breakout performances in The Perks of Being a Wallflower (and the as yet not widely seen Madame Bovary) with a nuanced performance as one of the first subjects to break down. Despite the monotonous narrative, the performers invest their characters with little bits of humanity that help differentiate one from another.

Characters repeatedly say during The Stanford Prison Experiment that the results are important. None of them ever say why, exactly: it is just presumed. That conviction lends the film an air of gravitas to the film, and without it, the movie could land on the wrong side of the line that divides documentation from exploitation. Whenever I see a movie about historical people who suffered, I try to imagine—especially if they are still alive—how I would feel if they were sitting next to me while I consume their suffering for my entertainment or enlightenment.

I think if it were me, I would just assume have people read about it in their psych books rather than relive the experience in all its painful glory. I definitely know that I would be frustrated by the condensed and seemingly half-hearted coda.

But then again, maybe I would be anxious to tell a new generation of listeners what Dr. Phil Zimbardo did to me. And if I lived in a country that represented four percent of the world’s population but over twenty percent of its prisoners, I might think a periodic reminder of the psychological and spiritual costs of that experience might be in order.

The most common descriptor for what the participants experienced seems to be “abuse,” though I have read a couple of descriptions that go so far as to call it psychological “torture.” One student is beaten with a nightstick. Several are forced to simulate gay sex, though that hazing ritual is cut sure. (It is unclear based on the way the film is shot whether actual sexual contact is forced before the scenario is broken up.) The experiment’s participants are forced to endure a constant stream of verbal abuse. On the one hand, what is actually said and depicted is less visually shocking than what one might see and hear in an average American horror film or news report. On the other hand, the context makes it hard to take. Those who have experienced abuse, bullying, or who suffer from post-traumatic stress should probably proceed with caution.