A recent New York Times feature discussed how evangelicals interpret a few Bible passages in support of or against same-sex marriage. The pro-con format of the Times feature supplies anecdotes, but it doesn’t answer the question of how people are applying the Bible to the debate on a wider scale.

For that, we have to turn to data.

The site OpenBible.info has a topical Bible that allows people to vote on and suggest Bible verses they think are relevant to a particular topic. Since 2007, the topics of homosexuality, same-sex marriage, and gay marriage have received over 30,000 votes across 940,000 pageviews, providing a reasonably broad window into the passages that people–largely evangelical Christians–apply to the debate.

The statistical patterns of these 30,000 votes reveal 60 Bible passages that commonly enter the discussion, falling into ten thematic clusters:

This chart shows the strongest statistical connections among the ten clusters. Three of these clusters are used against same-sex marriage: 19 passages about (the largest cluster), four relating to the , and three about man and woman becoming in marriage.

Four clusters are used to justify acceptance (or at least tolerance) of same-sex marriage: seven passages about , five about , four about , and four about valuing .

The final three clusters don’t deal directly with the topic: 10 passages about , two about how , and two about .

We can also examine how the popularity of each cluster has changed since 2011:

This data is hardly scientific since it depends on visitors to a single ... 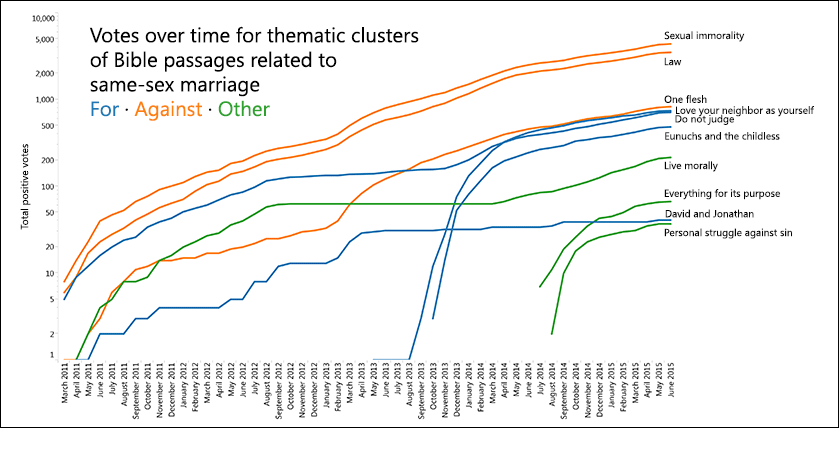