Saul's been converted, but it's going to get worse before it gets better.
Peter Chattaway|May 27, 2015
Image: NBC
Saul is blinded in 'A.D. The Bible Continues'

Episode 8: “The Road to Damascus”

There were several plot threads in this latest episode of A.D. The Bible Continues, but the biggest and most significant by far concerns Saul, the great persecutor of the Church who unexpectedly encounters Jesus on the road to Damascus and suddenly finds himself turning into one of the Church's greatest evangelists.

Emmett J. Scanlan, the actor who plays Saul, does a remarkable job of capturing how Saul's personality both changes and doesn't change after his encounter with Jesus. Before his conversion, Saul is arrogant and seething with contempt for the Church; afterwards, he's full of joy and contrition. And yet, just as he once persecuted the followers of Jesus with great zeal, he now boldly strides right into a Damascus synagogue, eager to tell everyone about the Messiah.

Some of the episode's psychologizing is a bit debatable, to say the least. Just before Saul has his vision, one of his traveling companions asks him why he hates Peter so much, and Saul's answer—which ends in mid-sentence when he realizes what he's saying—basically boils down to this: he's jealous that God might have revealed himself to a simple fisherman instead of someone educated and cultured like himself. I hate to say it, but this reminded me of how God's Not Dead insinuated that atheists really believe in God deep down but resent him for petty emotional reasons.

Meanwhile, Peter and John visit Samaria to see how Philip's evangelism is doing there, and along the way they meet Simon the (former?) magician—and the scene where Simon offers to pay for the gift of the Holy Spirit is typical of the show's strengths and weaknesses. 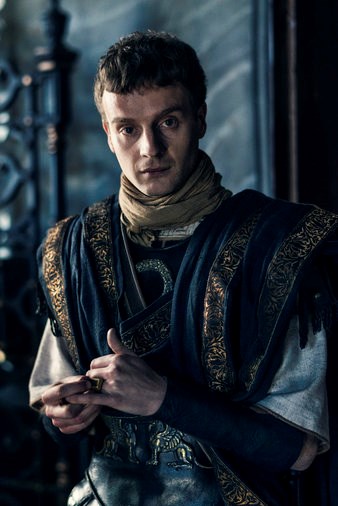