Want to know what it feels like to be homeless? Let Richard Gere show you in this extraordinary performance.
Mark Moring|September 18, 2015
Image: IFC Films
Richard Gere in 'Time Out of Mind'
Our Rating

Time Out of Mind opens with a black screen and the sound of church bells ringing. Since it’s a movie about a down-and-out homeless man, one wonders if the bells are a hint at redemption to come.

As the scene brightens, the Manhattan skyline comes into view. The camera doesn’t budge, but there’s plenty going on in the bustling neighborhood below. We know this because of the sounds. The church bells give way to the cacophony of children playing, pedestrians walking, traffic moving, trains clickety-clacking, and, finally, sirens wailing.

And the camera still hasn’t moved.

Finally, it pulls back slowly, and we see that we’ve been looking through a window. In one corner of the pane, a beautiful butterfly—or is it a moth? If the former, is it a pointing to beauty, resurrection, and new life? If the latter, is it a harbinger of things to come, of a place “where moth and rust destroy, and where thieves break in and steal”?

The camera slowly turns 180 degrees, bringing us inside that window, revealing a filthy, ratty apartment—holes in the drywall, trash on the floor, furniture strewn about. A man, apparently the building superintendent, comes through the front door, bringing in new tenants. After a few epithets and apologies about the condition of the place, he walks into the bathroom to find Richard Gere, sleeping in the bathtub. He’s fully clothed, even wearing a coat and scarf. He has fresh cuts and scratches on his face, and he looks like hell. The supe tells him he’s got to leave, right now. Bathtub Guy claims someone named “Sheila” told him he could stay there. The supe doesn’t know Sheila, and kicks him out. 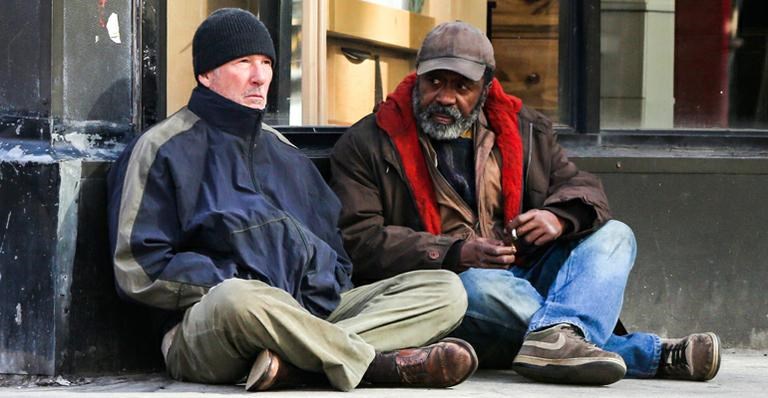