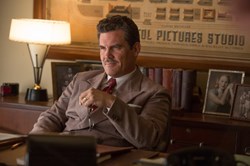 Those characters feel like what would happen if Turner Classic Movies accidentally left the door unlocked at night. Scarlett Johansson is a mermaid in a synchronized swimming fantasy picture; Ralph Fiennes helms a high-society Broadway adaptation in which America’s favorite lassoing cowboy (Alden Ehrenreich) is being forced to star so the studio can “change his image”; Channing Tatum is a deceptively mild-mannered singing and tap-dancing sailor; there’s a Carmen Miranda-like sweetheart (Veronica Osorio)—and George Clooney is a centurion among slaves in the sword-and-sandal Hail, Caesar!

That last production is in full swing, and Mannix is watching the dailies (“DIVINE PRESENCE TO BE SHOT,” the subtitles announce at opportune moments—the film is still in production) when he discovers its star has been kidnapped.

In one subplot, in a nod to the Communist writers who were blacklisted, a disciple-like cadre of Communist acolytes following their leader—suggestively named Dr. Marcuse—kidnap Clooney’s genial star and educate him in the ways of “direct action” and “accelerating the dialectic” while holding him for ransom (a startlingly common plot point in the Coens’ films, by the way). Everything can be explained by economics, they say, quoting Marx, and so certainly the concept of rendering to Caesar—either through Capitol Pictures, Das Kapital, or capitalism—is part of this title.

But mostly it’s about the meaning of life by way of religion, with which the Coens have always fiddled, sometimes dancing around the edges and sometimes diving straight into the middle. Hollywood’s Golden Age gives them the perfect excuse for a hysterical scene straight out of a joke: two priests (one Catholic, one Orthodox), a Protestant minister, and a rabbi sit in a boardroom with Mannix, debating whether the depiction of Christ in an upcoming picture “cuts the mustard” or is offensive. As the rabbi points out, for Jews it’s forbidden to portray God, but luckily for them Jesus isn’t part of the godhead. One of the ministers explains that technically Jesus is the Son of God. (The conventional disclaimers at the end of the credits explain that “This motion picture contains no visual depiction of the godhead.”)

Such a scene would in fact have happened regularly at the time, when clergy were called in to consult on both religious movies and others, as part of a partnership between Hollywood and the nation’s ministers to promote the moral health of the nation. It’s worth nothing that in today’s religious movie boom, the same thing often happens—this time to gauge (as in the film) the potential reaction from religious leaders and congregations. 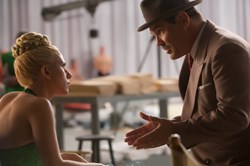 But as I said earlier, this is a passion play, one with Eddie Mannix at its center, our Man of Sorrows, the savior of the (movie) world. Lest we miss that, the film opens on a long establishing shot of a crucifix before moving to Mannix in the confessional booth, where he’s confessing the most banal of crimes before moving on to his work day.

Note: from here on, there are some mild spoilers, though it's hard to spoil a narrative so established.

Unlike every movie executive we’ve ever seen in a film, Mannix is a thoroughly decent guy who speaks nicely to his wife and tries to do his best. But he has reached a crossroads—a point of temptation, if you will. The tempter is a friendly Lockheed Martin executive, who wants him to abandon his true work in the world and come live the easy path.

All day long, Mannix suffers for his stars. He takes their verbal drubbings and deals with their indiscretions and sins and tries to keep them out of trouble, tasked with the thoroughly thankless job of keeping their images squeaky clean. He is dogged by twin competing gossip columnists (both played by Tilda Swinton).

He has been tempted away from this lonely path once and is tempted twice more (in a Chinese restaurant lit like an opium den when he first walks in) by the Lockheed executive, our Satan stand-in, folding the encounter in the desert into the film. He labors under the weight of his own conscience and the weight of the temptation before him, and encounters hazard after hazard on the road to his decision.

Near its end, we catch him in Gethsemane echoes deep in prayer, rosary in hand, as he contemplates what to do—and in a neat trick made possible by the existence of an actual set for a crucifixion scene being shot on the studio lot, he even approaches three crosses on Calvary.

The Coens are too meticulous to not have intended all that. What’s so fun about Hail, Caesar! is that it lets all the characters (played by your actual favorite movie stars) and sets and images from films made both during and about its time, from comedies to noirs to political dramas, come together in a grand mash-up that is then structured like one of the most enduringly popular genres: the biblical epic, the “Greatest Story Ever Told,” the archetypal tale of suffering and redemption.

But they don’t spring for an easy analogy. These are the Coens: nothing serious ever happens without a wink or a joke. Mannix isn’t the actual man of sorrows; he’s just in the movie business, which is always at its end a bit (or more than a bit) absurd. A speech given by the centurion at the foot of the cross seems like the stand-in for his epiphany—but later he gives a different confession, one that rings more true, about feeling that what he’s doing in the movie business is right and important.

So in a bit of in a bit of cyclical storytelling that recalls the repetitive structure of their last film about a soul tortured by his work, Inside Llewyn Davis, Mannix returns to the confession booth and talks about his cigarette habit. In classic Coen fashion, meaning in life comes down to the love that individuals share with one another, not the absurdity inherent in fate or big ideological systems. Mannix loves his wife too much to not feel bad about quitting his habit; other characters love their ridiculous dogs more than money, or make unlikely matches in unlikely offices. Every day is a fresh set of trials and temptations for the man of sorrows, but he never really faces crucifixion—just another day on set.

Hail, Caesar! is rated PG-13 for suggestive situations and smoking. Most of what’s uncouth about it is done by implication rather than seen on screen. The sailors’ song-and-dance scene is innocently (or not) homoerotic, and the mermaid one seems rather obviously phallic, but that will sail right past plenty of viewers. A character talks about another one engaging in “sodomy” (that is the word used) to get a job; another character is pregnant without being married, which provides a plot point for the film. It’s possible that some religious viewers might be offended by the film-within-a-film giving occasion for a few situational jokes in a religious context, but it certainly isn’t done irreverently. And neither Communism nor capitalism is outright condemned by the film itself, which I suppose some people may find offensive.

Alissa Wilkinson is Christianity Today’s chief film critic and an assistant professor of English and humanities at The King’s College in New York City. She is co-author, with Robert Joustra, of How to Survive the Apocalypse: Zombies, Cylons, Faith, and Politics at the End of the World(Eerdmans, April 2016). She tweets @alissamarie.