Is this new Ghostbusters movie funny?

On a scale ranging from whatever Adam Sandler is subjecting us to these days to the Jump Street series? Depends on what tickles your funny bone. You'll laugh, but sometimes you'll groan. There are good one-liners and gags (I'm partial, for personal reasons, to Melissa McCarthy's ongoing war with the Chinese food delivery guy over the number of wontons in her soup), and others that feel half-baked. But on balance, it's a good time.

Why is there a bunch of women starring instead of men? Is this some kind of man-hating gimmick?

Why is this even a question?

Ghostbusters never succeeded because of its cogent social commentary, thoughtful themes, or innovative plotting. Born of sketch comedy, it's all about the performances. The original Ghostbusters (which is about six months younger than me) featured mostly actors known for their hilarious work on Saturday Night Live. This one does too. Anyone with half a brain watching SNL these days knows the women have far outpaced the men in the cast for a while. Kristen Wiig, Leslie Jones, Melissa McCarthy (who's hosted SNL to great effect), and, above all, the great, zany Kate McKinnon—she of the impeccable comic timing—are some of the funniest performers on the planet. The movie busts the so-called Bechdel test to smithereens without being offputtingly “girls rule, men drool” about it.

Let's take a moment for a tribute to McKinnon. Not only is she channeling Christopher Lloyd's Doc Brown throughout—the glasses, the hair, the whole thing—but her random asides (even the ones that are obviously product placement, like crunching “salty parabolas,” a.k.a. Pringles) make the whole movie. Watching one scene in particular, you can't help but remember her SNL sketches on which she describes alien abduction and after-death experiences. She has been a star for a long time, but Ghostbusters really shows you why; by contrast, McCarthy, Wiig, and Jones are practically the straight (wo)men.

And then, for good measure, there's Chris Hemsworth as the Ghostbusters' dumb, gorgeous, bespectacled secretary, who can't figure out how to answer a phone. 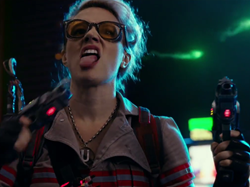 But will it ruin my childhood?

If this reboot, in a sea of reboots, ruins your childhood, then maybe it's for the best. Next question.

Kind of. Ghostbusters is a strange bird, when you think about it. It's a true reboot—it exists in a cinematic universe in which the original Ghostbusters movie does not—with its own plot. Wiig, McCarthy, and McKinnon are talented scientists who are trying to prove the existence of the supernatural, and through a series of strange events they wind up teaming up with Jones (who is underused, by the way) to stave off the impending apocalypse—because you can't make a summer blockbuster in which the apocalypse isn't impending.

But the weird thing about Ghostbusters is that the audience sure has seen the original. So it's also full (and perhaps too full) of winking service to the fans, with cameos from the original cast and locations and props and even some of the ghosts, and, to everyone's delight, the theme song. That fan service sometimes hamstrings the movie, which feels like it might be trying too hard to be both original and pay tribute to tradition. It needed a stronger script, and could have been much funnier. But given the pre-release controversy around the movie and the nostalgia it's up against, the result is still satisfying.

In general, it's best if you just don't think too hard about it.

Did Ghostbusters really need a reboot?

Need? No. But does anything need to be rebooted? Superhero movies, for instance, delight in reboots: Spider-Man, Batman, Superman, Hulk, I could go on forever. Star Trek is in a reboot phase. The new Star Wars are sequels, but have the hallmarks of reboots. Even James Bond has rebooted itself. Part of the fun is seeing how someone adapts the same concepts into a new story. Or if you want to think about it this way: does anyone need to make yet another film about the life of Jesus? No. But it’s going to keep happening, because people like it. And Hollywood is in the business of making things people will pay to see.

So how about the ghosts?

Here's something you might forget about while chuckling your way through Ghostbusters: it (kind of) argues that people who doubt the existence of the supernatural are naive, and that science confirms the intuitions of—well, not religion exactly, but certainly those who believe in a world beyond ourselves. Do not, under any circumstances, succumb to a compulsion to rigorously theology-check this movie. Ghosts here are vengeful spirits from the beyond who, demon-like, can possess the living and are intent on destroying them, but while you may want to have a chat with your impressionable youngsters on the way out, I don't think most people are getting their perception of the invisible mysteries from Ghostbusters. 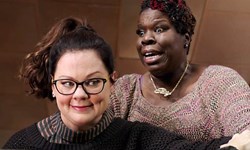 Still. Having a band of brilliant physicists confirm the existence of the supernatural and then fight valiantly and selflessly to protect humankind from destruction in a summer blockbuster flick is pretty cool.

The original was rated PG. This is rated PG-13. What gives? Why is Hollywood getting more trashy by the second?

As you might recall, the first film featured a character on the receiving end of a sexual act from the ghost, plus some near-nudity and a bunch of profanities. This one, by contrast, has some off-color jokes, but certainly nothing on this level (though its scary images are a bit scarier than they were 32 years ago). You can reasonably speculate from evidence that if the movie starred four leading male comedians instead of four female comedians, the movie might have tipped further into raunchy humor—but in general, trashiness is in the eye of the beholder. You should never judge a film by its MPAA rating, but especially not before July 1, 1984.

Alissa Wilkinson is Christianity Today's critic at large and an assistant professor of English and humanities at The King's College in New York City. She is co-author, with Robert Joustra, of How to Survive the Apocalypse: Zombies, Cylons, Faith, and Politics at the End of the World. She tweets @alissamarie. And she ain't afraid of no ghosts.