An interview with the legendary British filmmaker, whose movies exude a deep sense of spiritual longing.
Alissa Wilkinson|May 13, 2016

Terence Davies is a legend. In his four-decade career, Davies—who was raised in Liverpool in a devout working-class Roman Catholic family, the youngest of ten—has created a body of work like no one else, one that examines memory, family, and place through often startling beauty.

Davies abandoned religion as a teenager, and often grapples with his complicated relationship to the church, tragedy, and sexuality in his movies; he is outright critical of religion.

But his films (including Of Time and the City, The Long Day Closes, and Distant Voices, Still Lives) exude a spiritual sensibility and palpable longing that’s nearly unmatched in contemporary cinema. His camera’s careful attention to small things, like the light streaming through a window or a flickering candle, imbues everyday life with something like holiness.

There’s often large gaps between Davies’s films, due to funding. But this year, he has two out at once. Sunset Song, out in theaters this weekend, is an adaptation of Lewis Grassic Gibbon’s 1932 novel about a young Scottish woman, Chris Guthrie. Chris’s life is marked by both great tragedy and beauty, and critics (including this one) are hailing it as a masterpiece. A Quiet Passion, which premiered at the Berlin Film Festival earlier this year and is still awaiting a U.S. release date, traces the life of Emily Dickinson and her struggles with her faith and her art. (Read our report from the film’s premiere.)

Davies, who speaks warmly and almost musically, spoke with me for forty-five minutes about truth-telling in cinema, shooting light and potatoes, religion, spirituality, and the rich inner life of Emily Dickinson. (He also quoted poetry.) What follows was ... 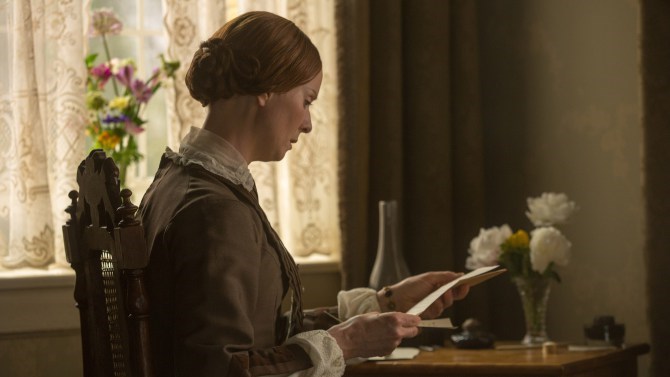