Participating in the “high holy day” of American civil religion is beneficial for Christians, so long as we do so thoughtfully.
Chris Gehrz|May 29, 2017
Image: Sweet Sarah Marie / Lightstock

This Memorial Day I’ll make what’s become an annual pilgrimage, to a place made sacred by the struggles of people like my cousin Mike. Nestled in between the Twin Cities of Minneapolis and St. Paul, Fort Snelling National Cemetery is the final resting place for more than 220,000 American military veterans and their spouses. Most of them died at a ripe old age, but a few of the headstones bear birth and death dates that are far closer than they ought to be. One of those belongs to Mike, a Navy corpsman traumatized by his experience of the Iraq War. He died in 2014 at the age of 33, leaving behind a wife and three young children.

Some of the visitors who had preceded me last year to Mike’s graveside left behind tokens of remembrance. Flowers and a small American flag rested peacefully in the grass. Two of his comrades-in-arms had placed quarters on the headstone. Nothing remained of my visit but fallen tears, fleeting evidence of the complicated mix of emotions I felt: grief at Mike’s suffering and death, pride for his courage and sacrifice, dismay at humanity’s propensity for violence, anger at the circumstances that led to his death, and uncertainty about how I should participate in the rituals of Memorial Day.

More of the hurt will have healed when I visit this year, but the other emotions have already started to bubble up. So as a Christian, as a historian, and as someone who loved and was loved by a fallen veteran, let me share what I’ve been contemplating as we approach Memorial Day.

We need reminders to remember.

In a sense, every day is a memorial day for Christians, heirs of Moses’ exhortation to the assembly of Israel: “Remember the days of old; consider the generations long past” (Deut. 32:7). For if we are called to be good stewards of that which God has made (Gen. 1:28), then we must recognize that time is as much a dimension of Creation as space. We must do our best to preserve and make meaning of the past, knowing that every passing moment erodes what’s left of what went before. Indeed, those who follow the risen Christ might even understand remembering to be a way of loving our (temporal) neighbors and proclaiming that the grave has won no lasting victory.

But while God “has put a sense of past and future” into our minds (Ecc. 3:11 NRSV), remembrance has never come easily for the creatures made in his image. Like the Israelites coming out of slavery in Egypt, we must heed the Bible’s instruction to “be careful, and watch yourselves closely so that you do not forget the things your eyes have seen or let them fade from your heart as long as you live” (Deut. 4:9). The risk of forgetfulness is all the greater for Americans in the 21st century, living as we do in a society that tempts us in a million ways to privilege the present and rush headlong into the future.

So we remind ourselves to remember. In the church, writes philosopher Jamie Smith, “the rhythms of Christian worship and the liturgical year stretch us backward” (Desiring the Kingdom, p. 158). Even the least liturgical evangelical regularly breaks bread and drinks from a cup “in remembrance of” Jesus (1 Cor. 11:23–25).

Likewise, secular time is structured so as to jog our memory. That calendar, like its liturgical cousin, is dotted with speed bumps that slow our frenzied pace, if only for a day, and force us to glance back at the past. So rather than treat the last Monday in May as nothing more than the extension of a spring weekend, Christians should first embrace it as a reminder of our commemorative calling and treat it with respect and honor.

We must be careful with what we worship.

But that day does much more than prompt remembrance. “The Memorial Day celebration,” wrote historian Conrad Cherry, “is an American sacred ceremony, a religious ritual, a modern cult of the dead.” May 29, 2017 is a high holy day of the “American ceremonial calendar . . . a sacred day when the war dead are mourned, the spirit of redemptive sacrifice is extolled and pledges to American ideals are renewed.”

In other words, Memorial Day is a festival of our nation’s civil religion, one of the many “constellations of rituals, ceremonies, and spaces that,” according to Smith, “invest certain practices with a charged sense of transcendence that calls for our allegiance and loyalty in a way meant to trump other ultimate loyalties” (Desiring the Kingdom, p. 104). Memorial Day is a time of national worship; approached heedlessly, it will tempt us to pledge to the nation-state the “total allegiance” that we owe to nothing and no one but God. 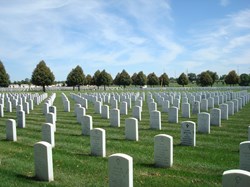 If evangelical Christians criticize civil religion at all, it’s usually on account of its ecumenical blandness. But what seems innocuous can also be insidious, shaping our hearts in ways that we only dimly recognize. The parades, concerts, and other rituals of Memorial Day are nationalistic liturgies, which Smith says are “intended to make us into certain kinds of people—good, loyal, productive citizens who, when called upon, are willing to make ‘the ultimate sacrifice’ for the good of the nation.”

I don’t mean to diminish what people like my cousin have done for their fellow Americans. Up the river from Mike’s final resting place, on Ramsey County’s World War I memorial, an inscription from the Gospel of John reminds visitors that there is no greater love than to lay down one’s life for friends (15:13).

But it might help to keep in mind that Memorial Day originated with national reckoning and repentance. It was first practiced in the last year of the Civil War, by white widows decorating war graves in northeastern towns and then by black citizens of Charleston, South Carolina, who reburied Union prisoners of war and turned “Decoration Day” into a symbolic funeral for slavery. In 1865 remembrance helped Americans learn the hardest lesson of their president’s second inaugural address: that “the judgments of the Lord are true and righteous altogether” (Ps. 19:9 KJV).

“Without an awareness that our nation stands under higher judgment,” wrote Robert Bellah in his famous essay on the topic, “the tradition of the civil religion would be dangerous indeed.” But do we still we allow room for repentance in our remembrance? When we come to graves like those in Mike’s cemetery, are we prepared to remember how this country’s wars have revealed both the better angels and inner demons of our nature? Couldn’t that kind of remembrance cultivate the kind of patriotism that President Barack Obama described in 2015, in commemorating the civil rights march from Selma to Montgomery: “the belief that America is not yet finished, that we are strong enough to be self-critical”?

The benefits of participating in civil religion

The President’s words in 2015 echo the argument that closes John Wilsey’s terrific book, American Exceptionalism and Civil Religion: Reassessing the History of an Idea. “The fact is,” he begins, “that Americans have always seen themselves as exceptional”; they’ve long attributed to their country a “stark uniqueness” (p. 16). But Wilsey distinguishes between different types of exceptional: closed and open. While the former stifles dissent and “divides people into . . . the Chosen and the Inferior Other,” the latter “opens the door for citizens to acknowledge, to address and to rectify real American flaws because, in doing so, citizens express true love for country.” While closed exceptionalism misleads Christians into thinking that “patriotism equals spirituality because their assumption is that America is God’s country,” its open alternative “does not conflict with Christian teaching by idealizing or idolizing the nation” (pp. 218, 220).

Arlington is a hallowed place Americans set aside for those who gave the full measure of devotion to their country, that they may rest in their graves. As you enter the grounds of the cemetery, you see signs admonishing all visitors to observe “silence and respect.” The signs are everywhere, but most visitors do not need reminding. During the height to the tourist season, you will find people from a wide variety of ethnic, linguistic, (presumably) religious and national backgrounds. You will find children, teenagers, young adults and elderly people. Many are visiting graves of loved ones, but most of them are there to see John F. Kennedy’s tomb, the Tomb of the Unknowns, and the rows of neatly laid out plots and headstones. The majority of visitors exhibit unity through their respectful behavior, as well as their observance of the civil religious practice of visiting the cemetery. (pp. 220-21)

What unites such pilgrims, he believes, is their common commitment to freedom, democracy, peace, and tolerance, “ideals that Americans perennially pursue, and often fail to attain. Nevertheless, Americans have shown themselves to be a uniquely self-examining people, with a remarkable ability to reflect on past mistakes and work to avoid repeating them.”

At their best, then, civil religious rituals like those of Memorial Day might inculcate a measured love of country that neither displaces love of God nor distorts love of (all our) neighbors. They might help remind Americans that, in President Obama’s words, “each successive generation can look upon our imperfections and decide that it is in our power to remake this nation to more closely align with our highest ideal.”

But, if we’re to remake our nation in alignment with its ideals, or if we’re to remember the past or reconcile our different affections, we must depend on God’s grace.

So this Memorial Day, I’ll come again to my cousin’s graveside. As I reflect in reverent silence on his courage and sacrifice, I’ll be praying the words that conclude Wilsey’s book, a prayer written by the great sociologist and civil rights activist W. E. B. DuBois:

May the Lord give us both the honesty and strength to look our own faults squarely in the face and not ever continue to excuse or minimize them, while they grow. Grant us that wide view of ourselves which our neighbors possess, or better the highest view of infinite justice and goodness and efficiency. In that great white light let us see the littleness and narrowness of our souls and the deeds of our days, and then forthwith begin their betterment. Only thus shall we broaden out of the vicious circle of our own admiration into the greater commendation of God. Amen.

Chris Gehrz is professor of history at Bethel University (St. Paul, Minnesota), where he teaches courses on World War I and World War II. He is the co-author of The Pietist Option: Hope for the Renewal of Christianity, due out September 2017 from InterVarsity Press.