Despite its size and location, the Isle of Lewis off the northwest coast of Scotland occasionally makes national news in the United Kingdom because of its conservative religious practices—including the strict observance of the Sabbath by many on the island.

Lewis was the site of the UK’s last great revival—beginning in 1949 and carrying on for three years—and remains one of the most devout parts of the country.

Over the years, there have been controversies relating to the operation of ferries to the mainland on Sundays. More recently, a movie theater has opened seven days a week, while a leisure center maintains its Sunday closure. All have drawn media coverage with quotes from Christian spokespeople reported as being “outraged” by the proposals.

The latest twist in religious affairs has occurred in Stornoway, with 8,000 people the largest town in the group of islands. However, it doesn’t involve Christians outraged about Sunday openings, but that a Free Church of Scotland minister was not outraged by plans to build the first mosque on the largely evangelical churchgoing island.

The last census in 2011 showed just 61 Muslims living in the Western Isles; however, this number has been bolstered in recent years by six refugee families arriving in Stornoway fleeing the war in Syria. Plans to build a mosque have been granted planning approval and funds crowdsourced for the conversion of a derelict house—hoped to be completed in time for Ramadan in May.

The press did manage to find a source who was outraged by the plans. But the quote came from a small breakaway denomination, the Free Church of Scotland (Continuing). This was not representative of the majority of local Christian opinion.

James Maciver, leader of the largest church on Lewis, was quoted in The Guardian newspaper saying: “They [Muslims] have always been regarded by the local community as people who’ve contributed to the local economy and integrated well. I don’t remember any animosity towards them. Outsiders may have got the impression that the Christian community here have resisted the mosque, but that’s not the case.” 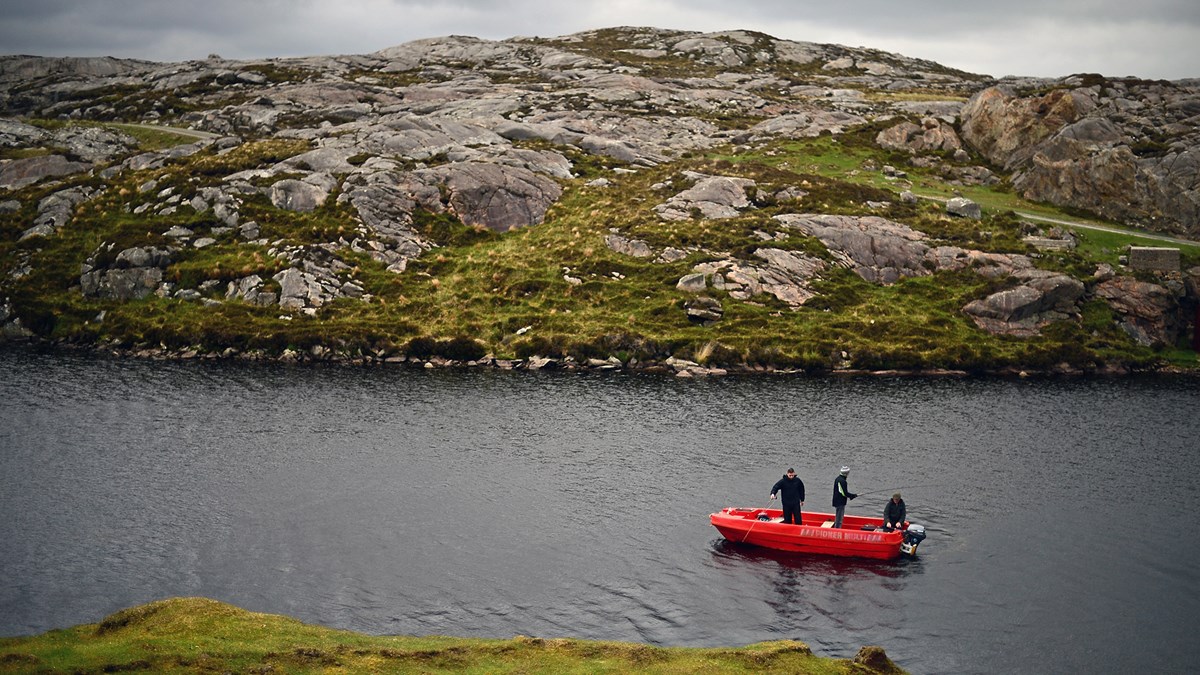 Men fly fish in a boat on a loch in Harris.

Writing about the attempt to concoct controversy where it did not exist, David Robertson, a minister in the island’s main denomination, the “biblical Presbyterian” Free Church of Scotland (not the smaller breakaway group), commented: “So what is going on when the Free Church does not oppose the building of a mosque in what was our heartland? Have we gone soft? Given into political correctness?”

“The Free Church would prefer that there was no need for a mosque to be built in Stornoway, because we would love everyone, including Muslims, to come to a saving knowledge of Christ. But we also believe that there is no coercion in real Christianity and that people have the right to reject, or to worship as they see fit. It is for God to judge, not the State. We defend the freedom to preach the gospel as we also defend the freedom of others. The Christian message is pleading and persuasion, not force and coercion. In a world where religious and secular groups alike are seeking to use the power of the state to impose their beliefs, we must not go the way of the world.”

Robertson cites how a Free Church leader made the same argument before the House of Commons in 1847, and goes on to say: “We don’t agree with Islam and maintain that Jesus Christ is the only way. But equally we don’t believe that our beliefs can be imposed upon other people by denying them the religious liberty that we demand for ourselves.”

And this is the crux of the issue. We don’t have to agree with the religious beliefs of others in order to support their religious liberty. In fact, it is because we believe in the significant differences between belief systems, and the vital importance of personal acceptance of faith in Jesus, that we cannot compel people to believe.

Confident pluralism, as John Inazu sets out, is not the same as relativism. We can have confidence in what we believe, and also give other people the space to practise their beliefs. Paul’s approach at the Areopagus in Acts 17 was uncompromising in the message he preached, but respectful of the cultural context he was speaking in.

Our response to people from different cultures and belief systems should never be one of hostility. That is not a helpful starting point to witness the goodness of God or to tell people about Jesus and saving faith. We should work for a society where there is maximum freedom for us to speak the Good News, and maximum freedom for people to accept or reject that.

Welcoming people of different beliefs into our neighborhood is a way of demonstrating our commitment to that freedom. Freedom of religion for all is good for all, and over the centuries has laid the foundation for many other freedoms we enjoy today.

Our attention should also look overseas. This week, the US Commission on International Religious Freedom reported on deteriorating conditions in 28 countries of concern. Chairman Daniel Mark said: “Sadly, religious freedom conditions deteriorated in many countries in 2017, often due to increasing authoritarianism or under the guise of countering terrorism.”

Recognition of the challenges Christians, and people of other faiths, experience in regimes across the world should never be used as an excuse to restrict the liberty of other faiths in the UK or the US. We provide more of a witness to the persuasive, powerful message of the gospel through a commitment to respect the consciences of those who follow other religions than we would through any form of coercion to believe.

Our advocacy for freedom of religion for people of other faiths also enables us to speak more credibly as we push for the freedom of Christians to worship, pray, preach, and practice their faith in countries across the world where currently doing so puts their lives at risk. For example, if we want to demand that Saudi Arabia allow Christians to worship in churches, we need to reciprocate back home.

A mosque built on a Scottish island known for its devout evangelicalism is a novelty that unsurprisingly garnered press attention. But it is not a threat to Christians, and it is vital that we do not treat it as one.

Danny Webster is advocacy and media manager for the UK Evangelical Alliance.

Men fly fish in a boat on a loch in Harris.