A writer and a scholar attempt sympathetic portrayals of the president’s rural supporters, but their sympathy only extends so far.
Anne Carlson Kennedy|May 4, 2018
Image: Specphotops / Unsplash

The torrent of words brought forth by the election of Donald Trump has turned modern political discourse into a daily obstacle course, dizzying in its movement from one news cycle to the next. Setting aside the daily headlines of escalating racial tension, immigration debate, budget fiascoes, Russian collusion, and Stormy Daniels to delve into deeper cultural, theological, and political trends is a daunting proposition. Fortunately, that weightier sort of analysis is starting to appear in print, as evidenced by new books from sociologist Robert Wuthnow and essayist Mark Phillips. Both authors are trying to make sense of why anybody, but especially residents of rural America, could have voted for Trump. Their efforts invite the reader to examine the tangled American psyche, to peer over the deep divisions of political ideology and consider the places, communities, and people themselves. 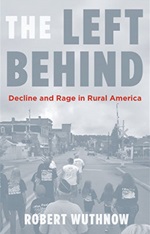 In The Left Behind: Decline and Rage in Rural America, Wuthnow, of Princeton University, brings years of research to bear, applying his scholarship to examine the plight of beleaguered small towns. He and his students conducted hundreds of interviews across the heartland. They ventured into villages on the edge of collapse, towns making a slow but persistent comeback, and municipalities that Wuthnow describes as “holding steady.” Wuthnow wanted to understand what trends and attitudes led to the election of Donald Trump—and, if possible, to gain sympathy for those who have drawn so much ire from left-leaning intellectuals like himself.

Wuthnow describes what he calls “moral communities,” a term he uses to indicate a gut-level social cohesion felt within smaller towns. Moral communities derive a sense of identity from generations-deep obligations to one’s self, one’s family, and one’s neighbors. The resulting web of relationships engenders in rural Americans a commitment to place that more mobile, urban populations sometimes have difficulty understanding. Elites on the left and right coasts feel more comfortable passing by, proverbially, on the other side of the road, flying over or driving through without stopping.

But nothing is gained by hurrying by. “Wouldn't it make sense,” Wuthnow asks, “to spend time talking with them?” And in service of this project, he valiantly mutes his disapprobation of the ordinary Trump voter as he ventures forth. He asks good questions. He listens. He is not, however, entirely able to eradicate his distaste. The gently patronizing tone—“They take pride in their communities’ achievements, if only something as locally significant as a new fire truck or a winning basketball team”— persists throughout the book. And, at one point, Wuthnow falls prey to his own elitist stereotype in referring to the work of another sociologist, Randall Collins, who studies the “rituals” that “contribute to community spirit in multiple ways.” How do rural Americans come together to reinforce the sense of community and place that keeps them alive, if not entrenched? Events like Oktoberfest and Old Home Week are organized and enjoyed by little communities up and down the country. Collins, casting about for some way to describe these unique moments, apparently not enjoyed the world over, settles on the term “co-presence” to make sense of people getting together to relish good food and a good time. I couldn’t resist thinking to myself, “This is why we have Trump.”

Wuthnow acknowledges his own bias in the beginning: “Listening as people we spoke with expressed their views, it was sometimes difficult to avoid thinking that what they were saying was patently unreasonable or bigoted.” And he comes away at the end admitting that it was “difficult to take an objective perspective toward a part of the country that has by many accounts been complicit in that derangement.” Feelings of empathy, nurtured by dispassionate research, can only extend so far. 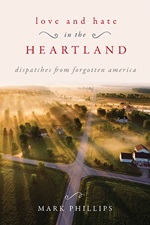 If Wuthnow, in spite of all the travel and conversations at kitchen tables, never was able to embrace the complexities of a Trump voter, Mark Phillips’s rich, luminous prose in Love and Hate in the Heartland: Dispatches from Forgotten America bridges the gap. Phillips lives in one of those towns that might be described as “left behind.” Out in the Alleghenies, near Buffalo, tucked into a hillside, Phillips lyricizes his own life and the gorgeous countryside, the returning forests pushing back a century of industrialization and human progress.

What did all this progress cost? When Phillips’s father got married in his early 20s, he had already breathed in so much “fly ash and coal dust” that, “embedded deep in his pores,” it “gradually graced his white shirt gray.” Phillips meditates on the importance an earlier generation attached to a man’s work. Growing up, he observed that work, especially for his father, was everything. If a man couldn’t work, he couldn’t truly live. Laboring up to the very day of his premature death, cancer-causing coal was so embedded in his body that it killed him.

Phillips stands apart from his father’s conception of work and ultimately exchanges it for what appears at first to be a more balanced view of life. Working hard as a young man, even trying out the coal plant in summers between studying to be a teacher, he helped his father build a weekend cabin—the hoped-for retreat from a life of anxious toil. Noting the irony of spending one’s last days in pain, never stopping to enjoy the fruit of so much labor, Phillips measures his own calloused hands against the lure of a life of the mind.

But as the pages turn—and this must be true of every generation—the mutual moral incomprehension between himself and his father comes sharply and poignantly into focus, creating an unbridgeable chasm. It is fair to question the point of all the work if you die young, if you’ve destroyed the forest, and if you have no words for your son. But the son, looking back at his father, doesn’t want to see the precarious nature of building a civilization and culture. His moralizing backward glance ultimately seems both reproving and decadent, since every generation lives off the labor of the one before.

Ultimately, Phillips’s affection for the land and his neighbors makes the political divisions in his community, wavering between the humorous and the apocalyptic, more painful to consider than when the Ivy League sociologist arrives to taste the coffee and accumulate the data. As I read Phillips describing, almost brutally, the revulsion he suppressed when Christians in his town wanted to pray that his wife might be healed from brain cancer, I found myself catapulted once more into the confusion and amusement I have endured since election night. Headlines everywhere roared that evangelicals and rural Americans voted predominantly for Trump. Indeed, my own county in upstate New York did. But my county is neither majority evangelical nor rural, although it certainly feels left behind. The issues here are just as complex as they are everywhere else. Indeed it wouldn’t matter who I voted for if I were to try to go next door and pray for my neighbors. My Christianity is ignominious. The complex nuances of a vote for or against Trump, for or against Hillary Clinton, wouldn’t be audible across the chasm of my own driveway.

The Right and the Left are guilty of accumulating dehumanizing turns of phrase. The rhetoric on both sides leaves many voters wandering in what feels like a political wasteland, like pilgrims seeking a new homeland but finding none. Wuthnow and Phillips both write from comfortable perches of moral superiority, the warm glow of social virtue signaling from their pens. One can’t help noticing the “otherizing” affectation of their writing. They fall into the same pit they set out so valiantly to avoid. On the other hand, the Right’s dismissive tone toward the Left and the continual cries of “this is why we have Trump” (my own included) wear thin. One nation, divided by everything, running from God—there’s no escaping the daily obstacle course, despite the best efforts of books like these.

Anne Carlson Kennedy lives in upstate New York, where she mothers six young children and helps her husband pastor a small Anglican church. She is the author of Nailed It: 365 Sarcastic Devotions for Angry or Worn-Out People (Kalos Press). Her blog is Preventing Grace.