A missionary couple shares the fragrance of Christ in the perfume capital of the world.
Dale Hanson Bourke|November 21, 2019
Image: Katherine Kirchner

When Nicole Derieux committed her life to Christ as a teenager, she imagined leaving her Scottish home to become a missionary in some far off land. Today, sitting on her terrace overlooking the French Riviera, Nicole laughs. “This isn’t what I could have ever imagined,” she says, “but it’s exactly where God wants me to be.”

Nicole and her husband, Vincent, head a ministry called Parfums de Vie (“fragrance of life” in French) in Grasse, a picturesque French city known as the perfume capital of the world. Located a few miles up the hillside from Cannes, the region attracts billionaires, movie stars, and royalty. But behind all the glitz and glamour are vulnerable foreign workers, most from North Africa, who struggle to survive while doing the menial work for the rich. The Derieuxs minister to that population.

“Many of the workers only speak Arabic, live with their families in terrible conditions, and struggle to have a decent life,” says Nicole. “Some have work visas but others are undocumented, making them even more vulnerable.”

When the Derieuxs first moved to the region they asked, “Who would Jesus befriend?” Instead of the rich and famous, they sought out those who are largely invisible: the workers who clean the hotel rooms, haul the garbage, and sweep the streets. “Jesus spent his life living among the marginalized and the poor,” says Vincent, whose own grandparents were evangelized by American missionaries who came to France after World War II.

As the Derieuxs began to learn more about the lives of the mostly Muslim workers, they sensed a great need among their children, in particular. “Although they attend French schools, they go home to families who often don’t speak French and to conditions that make it very difficult to do homework,” says Nicole. “The children often fail in school, because they have no support system.”

School holidays and weekends pose another problem: The parents have to go off to work and leave the children unattended.

Nicole, a former French teacher, and Vincent, who grew up in Orange, France and once served in the French special forces, began to offer their home as a place for kids to do homework. After some success, they started hosting camp days, where the children could safely play games and enjoy outdoor activities instead of roaming the streets or staying in their tiny apartments. The Parfums de Vie ministry was officially launched in 2008.

“We are always very clear with the parents that we are Christians and we will tell the children Bible stories and offer them books about the Bible. We tell them we will pray in front of their children. We never want the parents to be surprised,” says Nicole, who along with Vincent has studied Arabic to communicate effectively with the children’s parents. “There are a few families who are uncomfortable with our approach, but most are so grateful for how we help their children.”

The Derieuxs pray for every child in the program and are careful to share their faith without openly proselytizing. Their witness has proven effective. Some of the children, members of their families, and volunteer tutors have embraced a personal faith in Christ. “People were suspicious at first, but they have watched us over the years,” says Nicole. “They see who we are and how we live out our faith. We are not preaching, we are living out the gospel.”

Today, the ministry has grown so much that it has taken over a former mechanic’s garage within walking distance from the school. When school lets out each afternoon, children of all ages stream into the garage, sit down at the tables, choose books from the library, and meet with volunteers who help them with their homework. 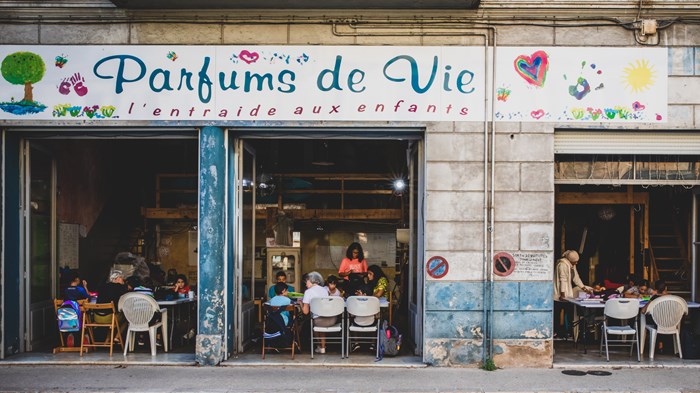 The effectiveness of tutoring, mentoring, and taking a personal interest in the children has been stunning. Narjes, the child of North African immigrant parents, began to fail during grade school because of the difficulty of her living situation. She entered the Parfums de Vie program eight years ago and soon went from failing to being the top student in her class. Her grades were so good that she qualified to enter an elite French boarding school, where she continues to excel.

Now 18, Narjes speaks English fluently (in addition to French and Arabic) and has set her sights on a university in the United Kingdom. She hopes to study psychology and neuroscience so that she can help kids and one day come back to work at Parfums de Vie.

“The children look at Narjes and some of the older students who are excelling and begin to imagine a better future for themselves,” says Nicole. “It is wonderful to see a child realize that his or her future can be so much more. And their families are so proud of them.”

The harder challenge, perhaps, is getting locals to accept the ministry. The citizens of Grasse often have negative feelings toward the immigrant community and also view Christian missionaries with skepticism. Nonetheless, they notice the good work of Parfums de Vie and respect that the Derieuxs are addressing hard issues and helping solve problems with the youth.

“In general, the French are vey suspicious of religion and view evangelicals as part of a cult,” says Nicole. “But they know we are Christians and respect us for the work we do. Some have volunteered to tutor children and others have supported us in other ways.”

One avenue of support came from the head of the famous French perfume company, Molinard. The managing director of the company, Celia LeRouge-Benard, was impressed by the Derieuxs’ work in Grasse, where the company is headquartered. She donated most of the cost of developing two fragrances, “Toujours Espoir” (Always Hope) and “Etoile Celeste” (Heavenly Star). “The French are mostly closed to the gospel, but perfumes touch their hearts, and they love that the fragrances support a good cause,” says Nicole. 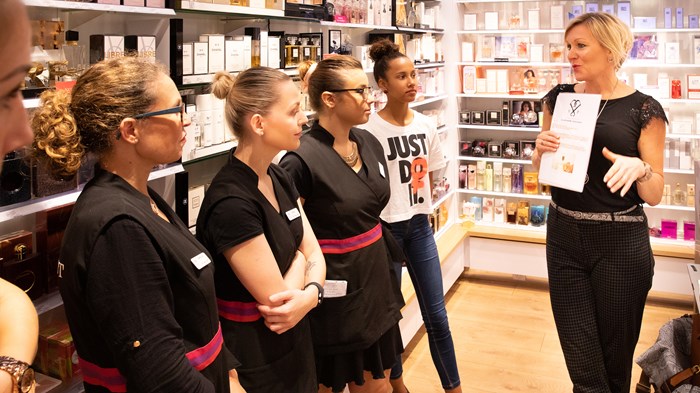 The Derieuxs support their work through online sales of the two perfumes and also sales in a few retail outlets. “We have a donor who is a businessman and has challenged us to find ways to create income, in addition to taking donations,” says Nicole.

This donor provided a loan to help the family purchase an aging villa, half of which they use as a short-term rental unit. Income from the very popular rental—which has a private pool and a spectacular sunset view of the Mediterranean—helps cover the cost of the property.

The rest of the home, where Nicole and Vincent live with their son, 11-year-old Etienne, serves as an informal hostel for their ministry. The kitchen routinely feeds a dozen or more children who drop in when they’re hungry, the living room includes bunk beds, where two teenage girls are living temporarily, and other beds crammed into corners often provide a safe place for women and children to stay.

“Sometimes there is violence in the families. Sometimes a husband, who has the work visa, will leave, and his family will be left without any income,” explains Nicole. “Our home is always open to those in need.”

The sometimes chaotic home doesn’t seem to phase the family. “At school, Etienne, an only child, told the teacher he has five brothers and sisters,” laughs Nicole. “When I asked him why he said that, he explained that the other children who live with us are really like brothers and sisters to him.”

The Derieuxs have plans to grow their ministry. They hope to purchase (rather than rent) the garage in order to convert it into a more effective learning center; expand the perfume business so that its income can support more camps for kids during school vacations; and possibly extend their ministry to other communities with similar demographics.

But their ministry reaches more than just poverty-stricken immigrants. It also affects the atheists and secular French in the local community. “Living out the gospel by helping the marginalized not only ministers to the poor but also to those who are ‘rich’ and have little interest in spiritual things,” says Nicole. “Living out the gospel changes hearts.”

To learn more about the ministry of Parfums de Vie go to villadesparfums.com

In the French Riviera, Both Arab Immigrants and ...