Hope springs eternal every winter as baseball teams assemble in warmer climes to make ready for the long and glorious season some still call our national pastime. Baseball surely takes time, whether it be the interminable hours of a single game or the 162-game season itself. Still, I love baseball. I love the stats and the strategy. I love that failure is status quo (the best hitters still only manage success 3 times out of 10). I love the bursts of delirium amid all the tedium. And I love the peanuts and Cracker Jack—still sold in ballparks mostly because you sing about it every seventh inning stretch.

This spring, baseball reels from a self-inflicted integrity crisis. The crux centers on the Houston Astros being found guilty of sign-stealing, a sin as old as baseball itself. In case you somehow missed the news, the 2017 World Champions and last year’s American League leader employed a deviously high-low technology scheme to cheat their way to their World Series win over the Los Angeles Dodgers. A center field camera aimed at the opposing catcher caught signs sent to the pitcher, enabling Houston hitters to know what pitch was coming. The stolen signs were relayed to the Astros’ dugout using a “dark arts” technology called Codebreaker. Players would tip off their teammate at the plate batter by banging a trashcan if the pitcher was throwing a breaking ball or a changeup. No bang meant a fastball.

A whistleblower led to an investigation and verdict, though latest reports say everybody already knew (and thus the Nationals beat the Astros in the 2019 World Series). Managerial heads rolled, though no players were fined. Dodgers fans clamor for Major League Baseball to revoke Houston’s championship and award it to Los Angeles. Listen for trashcans to bang incessantly throughout the stands in every ballpark Houston visits this coming season.

That sports abets cheating is nothing new. Obscene amounts of money and celebrity fame bountifully award professional athletes who rise to the top of their game. Banging trashcans is only the latest in a long history of subterfuge that’s gone so far as pharmaceutically enhancing the human body itself. Rationalizers offer well-worn excuses: “Everybody does it,” or “If you’re not cheating, you’re not trying.” But where is the bottom? Is sports still sports if baseline honesty no longer applies? 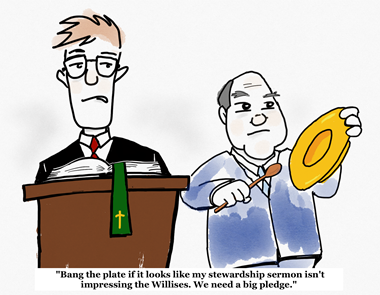 In the Big Inning…

There’s no explicit mention of baseball in the Bible (aside from that Genesis 1:1 pun about “in the big inning…”). There are pitchers (the pouring kind, Gen. 24:15) and catchers (the fishing kind, Luke 5:4), as well as plenty of errors and walks. There’s also the clear prohibition against stealing in the Ten Commandments (Ex. 20:15). The closest we get to banging a trashcan might be Moses striking that rock in the desert to induce an outflow of water for a parched Israelite people.

It’d been a long and dry season—forty years walking in circles. In Numbers 20, the final desert year, Moses is old and tired, worn down by the wandering and Israel’s constant complaining and blaming him for their own failures (v. 3–6). Moses sought God for help, and the Lord responded by instructing Moses to take his brother Aaron’s bat, step to the plate (so to speak), and knock it out of the park without ever taking a swing. “Speak to that rock before their eyes and it will pour out its water. You will bring water out of the rock for the community so they and their livestock can drink” (v. 8).

Water from a rock? No big deal. Moses had done it already back in Exodus 17. Moses marched over to the rock and gathered a crowd just as God commanded. But then something snapped. Moses lashed out at the people and labeled them “rebels.” He snarked about having to produce water from stone as if somehow he owed them or had something to prove. And then, in a fit of anger, Moses took his bat and struck the rock, not once, but twice. BANG! BANG! And it led to a home run! Water gushed forth!

But Moses got called out. He was told to talk to the rock, not strike it. The Lord said to Moses, “Because you did not trust in me enough to honor me as holy in the sight of the Israelites, you will not bring this community into the land I give them” (Num. 20:12).

Centuries of biblical research have tried to make sense of what seems like a punishment unfit for the crime. Forty years of faithfulness and Moses gets disqualified for one lousy error? A justifiable fit of anger aimed at people who deserved it? But Moses’ sin was not so much a loss of temper as a loss of faith. He did not trust God enough to honor him as holy in the sight of the Israelites. The rock symbolized God’s gracious presence among his people. The psalmists would declare God to be their rock and their redeemer (Ps. 18:2; 31:3). The apostle Paul would later name this very rock from which streams of living water flowed to be Christ himself (1 Cor. 10:4). Banging on the rock threatened the integrity of the entire Exodus enterprise. If God can’t be trusted, how will the gospel survive?

The Astros held a cagey press conference at the start of spring training. Players and management conceded they “broke rules” but said it didn’t impact the game. So then why do it for as many as three years if it didn’t make any difference?

Integrity in baseball is symptomatic of what’s been reported as an overall loss of faith in most every institution, churches included. Yuval Levin labels the loss as a collapse of essential social structure, what he calls “a failure even to attempt to form trustworthy people, and a tendency to think of institutions not as molds of character and behavior but as platforms for performance and prominence.” Levin recalls Chicago Cubs second baseman Ryne Sandberg, who upon his induction into the Baseball Hall of Fame, implored fellow players to remember “that learning how to bunt and hit-and-run and turning two is more important than knowing where to find the little red light on the dugout camera.”

The rock-banging saga concludes in Numbers 20:13. “These were the waters of Meribah [meaning quarreling], where the Israelites quarreled with the Lord and where he was proved holy among them.” We don’t like that Moses had to forfeit his trophy. But it was the right thing to do.