The Eubank family offers food, shelter, and medicine on the frontlines in Iraq and Burma.
Celina Durgin|February 21, 2020
Image: Chris Sinclair

In northwest Mosul, an Iraqi civilian preparing to clamber through a hole in a wall hands a swaddled baby to an American man wearing a dusty combat uniform. The American, Dave Eubank, is not a soldier. All around them, Iraqis hurry past, carrying children and crying out to each other as they flee approaching ISIS militants. Eubank tenderly passes the baby off to another Iraqi, remaining calm amid the chaos.

This turbulent scene opens a new documentary, Free Burma Rangers (Deidox Films and LifeWay Films), directed by Brent Gudgel and Chris Sinclair and playing in select US theaters February 24 and 25. Formerly a US Special Forces operative, Eubank is the head of the Christian humanitarian service movement Free Burma Rangers (FBR). All five members of the Eubank family have spent much of their lives in war-torn areas of Burma, Sudan, Iraq, and Syria, sometimes at or near the frontlines of fighting, to answer what they believe is God’s call to free the oppressed.

FBR supplies emergency medical care, shelter, food, clothing, and human rights documentation to people in war zones, often where other relief groups do not venture. Many Rangers are persecuted Christians from Burma (also known as Myanmar), who joined the group when Eubank formed it with his wife, Karen, in 1997 to aid and rescue Burmese minorities from oppression by their military government. The couple’s children Sahale (19), Suuzanne (17), and Peter (14) grew up in Burma and have assisted Dave and Karen in aspects of the relief efforts for as long as they’ve been old enough to help.

FBR was one of the first humanitarian groups to aid civilians in Mosul, Iraq, a former ISIS stronghold. And it was one of the last groups remaining at the Syrian-Turkish border when American troops withdrew in November 2019 and where conflict between Kurdish soldiers and Turkey-backed Syrian militias continued.

During one daring rescue, Turkish gunfire was preventing a team of Rangers from reaching a woman trapped in the line of fire. Eubank had a signal on his phone and received a random call from a chaplain he knew. The chaplain said he felt the need to pray for FBR, and at that moment, Eubank told CT, the shooting stopped, and the enemy turned away. The rescue was successful, and everyone survived. This seemingly miraculous event is one of several Eubank has reported over the years, with more recounted in the documentary.

Unfortunately, not all of their missions have been similarly successful. In November, Eubank mourned the loss of his fellow Ranger Zhao Seng, a Burmese man who served as a team videographer. Zhao died in an apparent shelling by a Turkish-backed Syrian group, becoming one of about 30 Rangers who have sacrificed their lives. Zhao and other FBR videographers contributed most of the astonishing footage in the documentary. Every FBR relief team includes a videographer, to let the world know what has been happening.

Eubank is currently with the Rangers in Syria, where he spoke to CT from a hospital in Tel Tamer before leaving to distribute food and other supplies to Syrians later that afternoon. Since the early days of FBR, Eubank has felt that the Rangers’ activities and the particular suffering they witnessed have remained largely unknown to the broader world.

Eubank met documentary director Chris Sinclair, one of the documentary’s directors, back in 2005 when Sinclair visited FBR in Burma to film a story on what motivates a Ranger. One night, while they were sitting at a little bamboo table, Eubank told Sinclair that he had been wanting to make a documentary about FBR. After everything Eubank had experienced, “stories well up inside you,” he said.

In creating the documentary, he wanted “to bear witness to what God has done, to the beauty of God’s people, his creation.” The beauty of God’s diverse people is one thing Eubank is grateful his children have grown up witnessing—despite the fear, blood, and broken bodies they’ve helped assuage and tend. Eubank says his two daughters and son have learned to see the people they aid with loving eyes—even when it’s most difficult.

One night, his daughter Suuzanne was helping distribute food at the Syrian-Iraqi border to people who had fled. Some of these people shouted with hostility at the FBR relief workers, and some, desperate for food, started fighting each other and knocking Suuzanne around. She tearfully told her father that she didn’t think she was good enough to be there because she felt she didn’t love these people.

Eubank asked his daughter to pray with him for God’s love. When they finished, Suuzanne said, “Jesus is already helping me. I can do this again.”

He admits that life for his family is uncomfortable and, at times, dangerous. Karen and the kids don’t normally follow him and other Rangers to the front lines, instead providing food, medical care, and children’s programming usually out of harm’s way. But enemy lines can shift quickly and unexpectedly.

Their willingness to live this wild and strange life, serving alongside their parents, has been “the greatest gift,” Eubank said. “They’re so cool—they’re better than I was as a kid.” Despite the risks and the hardship, Eubank maintains that “the good things far outweigh it,” and that each of his children individually depends on God. 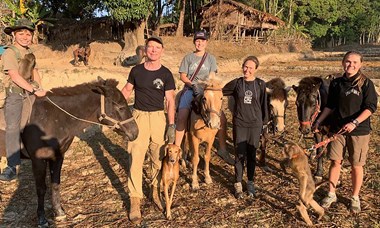 Since 2011, the family has returned to the US annually for a couple of months each year. The kids say they feel like Americans. When stateside, the Eubank children compete in rodeos and climb mountains. They’ve gone skydiving in Europe. But Eubank added that his children “know that America is not the center of the universe.”

The family has always viewed other Rangers as part of their extended family. The children screamed in sorrow when they heard that Zhao had been killed—they had grown up viewing Zhao as an uncle figure to them in Burma.

It might seem that, of all people, the Rangers and the people they help should have reason to doubt God’s love. Eubank admits he sometimes finds it challenging to trust in God’s goodness. But ultimately, he falls back on Simon Peter’s words in John 6:68: “Lord, to whom would we go? You have the words of eternal life.”

Among other things, he experiences God’s goodness when he gives food to someone and sees their happiness, when people support FBR, when he skydives, and when his kids race their ponies. Though he cried daily for a long time after losing Zhao and other Rangers who died, he knows the sorrow is evidence of God’s goodness in creation: “You can’t have sorrow without love.”

Celina Durgin is a writer and editor living in Boston, Massachusetts. She has also written on politics and culture for National Review.