The Evangelical Fellowship of India documents 300-plus cases of Christian persecution by Hindu nationalists each year. Muslims have it even worse.
Vijayesh Lal|February 28, 2020
Image: Manish Swarup / AP Images

Aside from some mispronunciations that sparked memes, President Donald Trump’s visit to India this week went mostly as scripted. The entire trip was high on optics—a spectacle of bromance between him and Prime Minister Narendra Modi—but delivered little of substance apart from some modest deals on defense, energy, and telecommunications.

However, this was quickly displaced from the headlines by another happening in Delhi while the US president was still in India’s capital.

On February 23, the first day of Trump’s visit to the subcontinent, clashes broke out in Delhi after Kapil Mishra, a leader from Modi’s ruling Bharatiya Janata Party (BJP), gave an ultimatum to the megacity’s police, in the presence of a senior police officer, to clear anti-Citizenship Amendment Act (CAA) protesters from the Jaffrabad area of the capital within three days.

The CAA is a controversial act recently passed by the Modi government that links citizenship to religion in India and actively discriminates against Muslims. When combined with the proposed National Register of Citizens (NRC) and an updated National Population Register (NPR), it will likely have an adverse impact on many citizens of India but mainly Muslims, who are the nation’s largest minority. Many could be deprived of citizenship. Social activists and commentators have called on the government to withdraw the legislation.

Hundreds of protests have erupted across the country, with some crowds reaching the hundreds of thousands. The Shaheen Bagh neighborhood in New Delhi is a symbolic epicenter of sorts of these protests, where mainly Muslim women have been leading demonstrations for three months. Jaffrabad, where Mishra gave the ultimatum to the Delhi police, was also a protest site.

Soon after the ultimatum, clashes broke out in Jaffrabad and spread to other areas of northeast Delhi. By the second day, according to commentators, it had transformed from a clash to full-scale anti-Muslim violence that so far has claimed 38 lives, mainly Muslims. It has also resulted in much destruction of property, both public and private, making it the worst violence against a community in Delhi since 1984 when Sikhs were targeted. 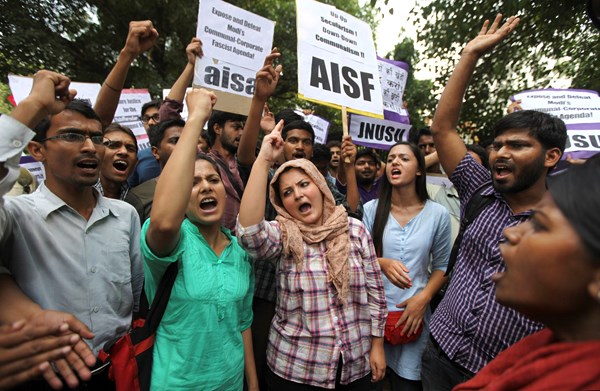 Hundreds were injured as the centrally administered Delhi police proved ineffective in controlling the violence for the first three days. Many videos circulating on social media appear to show the police, along with various right-wing radicals, complicit in targeting Muslims. It was only after the Delhi High Court intervened and questioned the government’s lack of action that the situation seemed to improve. (The judge who passed the orders questioning the government was transferred within two days.)

By the second day of Trump’s visit, when he arrived in Delhi, more than 13 people had already lost their lives. However, when the American president was briefing the media on his visit and was asked about the sectarian violence in Delhi and religious freedom in general, he surprisingly praised Modi. He said that the Indian prime minister was “incredible” on religious freedom and that Modi wants “the people to have religious freedom and very strongly.” Trump did not comment on the clashes in Delhi; he said he’d heard about it but hadn't discussed it with Modi, and said that it was “up to India.”

Prior to his visit, even though a US official indicated that Trump would be discussing religious freedom with Modi, expectations were rather low. Most, however, did not expect Trump to praise Modi on religious freedom—one of the shakiest parts of the prime minister’s political record. After all, it was the United States that denied Modi, then the chief minister of Gujarat, a diplomatic A-2 visa and also had revoked his B-1/B-2 visa on the grounds of severe violations of religious freedom. Modi remains the only person ever banned from travel to the US under the International Religious Freedom Act (IRFA).

And Modi’s record on religious freedom since becoming the leader of India has not been something to be proud of. His silence when minorities in India have been targeted and lynched by right-wing mobs has been telling. The worst sufferers of the wrath of extreme Hindu nationalists have been India’s Muslims—the targets of cow vigilantes and much hate speech—but Christians have not been far behind. The fundamental freedoms promised by the constitution of India to religious minorities are being constantly eroded, and persecution is a daily reality for many Christians in India.

Radicals affiliated with the Rashtriya Swayamsevak Sangh (RSS) movement and its family of organizations—including Modi’s BJP—have been making concerted efforts to attack Christians both physically and socially. Groups such as Bajrang Dal and the Vishwa Hindu Parishad, which believe in the ideology of Hindutva as promoted by the RSS, have disrupted worship services in churches, beat up pastors and other Christians, engaged in vandalism and destruction of property, and have pressured many Christians to recant their faith and forcibly convert to Hinduism.

The lack of police action, and in too many cases the cooperation of the police with the radicals, has resulted in a culture of impunity, emboldening the oppressors to attack without fear of any consequence. This has resulted in a sense of insecurity felt by many Indian Christians. It does not help that responsible leaders of Modi’s party, including state and union ministers, routinely engage in hate speech against Christians and other minorities. This only bolsters the radicals, who view this as open encouragement to target minorities.

According to the Religious Liberty Commission of the Evangelical Fellowship of India (EFI), which has been documenting incidents of persecution against Christians since 1998, incidents targeting Indian Christians have risen steeply since 2014, when Modi came to power. The commission recorded 147 verified cases of persecution in 2014; 252 cases in 2016; 351 in 2017; and 325 in 2018. The EFI commission will soon release the data for 2019.

Meanwhile, 8 out of 29 states in India have passed “anti-conversion laws,” which are meant to act as a deterrent against religious conversions carried out by force, fraud, or other inducements. The church in India condemns such conversions, for any valid conversion must be an act of free will. However, as plenty of human rights organizations have confirmed, these laws have been misused to create a hostile and violent environment for religious minorities, especially Christians. Extremist groups and the police alike have targeted Christians with the convenient allegation of “conversion by force, fraud, or allurement.” Documented and verified incidents show that Christians and pastors have been frequently arrested or detained on the pretext of investigation. Ministers of the current government, as well as leaders of the BJP, have voiced their support for the introduction of an anti-conversion law on a national scale.

One of the biggest curtailments of religious freedom in India is the denial of affirmative action to Christian and Muslim Dalits. A Constitutional Order of 1950 continues to discriminate against and disempower Dalits belonging to these minority faiths. While Dalit Hindus enjoy benefits such as reserved slots in jobs, education, and political representation, to help them rise up and join the mainstream of Indian society, the same privilege has not been accorded to Dalits from Christian and Muslim backgrounds. This goes against the spirit of the Indian Constitution, which upholds equality and justice. Dalit Christians have been fighting a long drawn-out legal battle to receive the same rights.

Some activists and Christian leaders in the United States had expected Trump to use his distinctive position to speak to Modi about the urgency of ensuring security for religious minorities in India and to take measures to ensure accountability of the perpetrators. But his silence, and in fact endorsement, of Modi’s commitment to religious freedom has let them down.

In the relationship between two countries, religious freedom tends to get lost in the dialogue and becomes subservient to foreign policy rather than guiding it, while economic and other strategic interests take the forefront. But on this trip, even the economic interests appeared to take a backseat to vanity, much less religious freedom. An opportunity has been squandered. We must remember that friends do hold each other accountable—especially when the friend is a country that is a multiethnic, multireligious, and multilingual society of more than a billion people that shares the democratic values and ideals of the United States.

Vijayesh Lal is the general secretary of the Evangelical Fellowship of India, based in Delhi.

Speaking Out is Christianity Today's guest opinion column and (unlike an editorial) does not necessarily represent the opinion of the magazine.