Most of our Instagram accounts resemble the modern equivalent of a high school locker: Here are photos of me and my friends, and here are things I find beautiful. Only now, the insides of our lockers are beamed across the world as quickly as we can slam them shut.

Instagram gets a lot of flak for being impossibly aspirational and for fueling competition and personal branding. This is especially true among American women, who are substantially more likely to use the site than their male counterparts (43% to 31%). But it has also come to develop a cadre of professionals who have brought their expertise to the little squares and 15-second clips of Instagram feeds and stories—therapists, poets, life coaches, and artists.

And in between the heavily filtered “outfits of the day” and sparkly sponsored content campaigns, there are also Christians doing their part to bring truth and encouragement this corner of the internet.

With more than a million followers on Instagram, Morgan Harper Nichols is one of them. Her painted and handwritten messages, inspired by the stories sent to her by fans, aren’t explicitly Christian but are undergirded by what her own faith has taught her about hope, grief, fear, self-doubt, and growth. She proclaims lines like “Let joy be joy” and “Take heart. Breathe deep. You have not missed out on what was meant for you.” 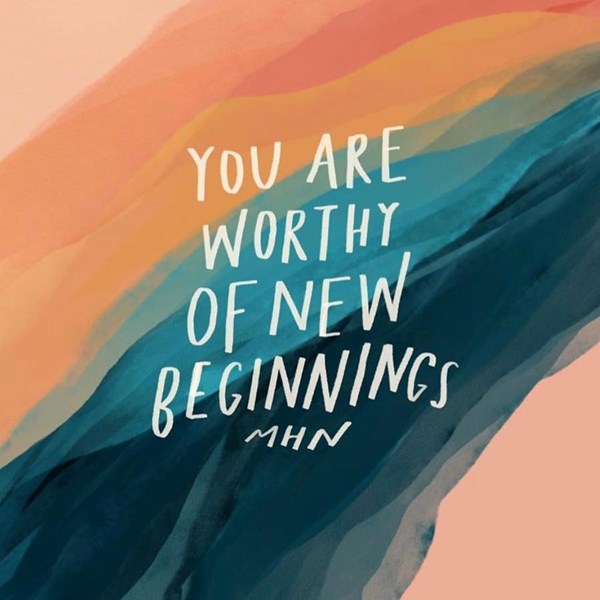 Instagram isn’t just about admiring something; it’s also about curating your own space and personality online. That’s why thousands re-post Nichols’s stories each day—a sign that they love her beautiful work, as well it what it says about them and to them.

“What I found was it wasn’t so much that I was this amazing writer who had the perfect words,” Nichols said. “For so long I’d been struggling to tell my story … and hundreds of other people feel that way, too.”

The 29-year-old had tapped into the art of the story, and she portrayed those universal themes in her Instagram artwork.

Instagrammers crave the re-postable. Blogger and artist Ruth Chou Simons recognized that early on. She saw the way inspirational quotes—“Relax,” “Be Brave,” and “Love What You Do”—were coming front and center in popular culture. Our pillows, coffee mugs, wall hangings, and notebooks are covered with them. But Simons decided she wanted to offer something more meaningful than empty platitudes.

Dozens of Christian women, including Simons and Nichols, have turned Instagram into a full-time ministry. Their posts don’t always look the same, but they have a shared purpose. These accounts want to give women scrolling through Instagram something worth pausing for.

Nichols’s explosion on Instagram was accidental. It started three years ago, on a night that had her feeling creatively frustrated and professionally stunted. She wanted to be an artist but also wanted to pay the bills, and that was getting harder. So she wrote a little poem.

“I believe it was God speaking through me, and saying the things I needed to hear about myself,” she said. She posted it on Pinterest, not Instagram (“This was my way of putting it out there without really putting it out there,” she said, laughing) and left it alone. A few months later, it had been shared over 100,000 times. “To this day I have no idea how it happened,” she said. “I didn’t even use hashtags or anything,”

Wanting to keep that momentum going, Nichols put out a call to her modest list of Instagram followers at that time: Send me your stories, and I’ll create a poem for you.

She thought maybe she’d get a few responses and get the ball rolling. “I was like, maybe for this whole next week I’ll just start writing for people’s stories,” she said. That was two years ago, and she never stopped. Now her followers aren’t just her audience. They’re her creative directors.

“I found so much more inspiration from other people’s stories than my own,” Nichols said. She estimates she’s crafted maybe a thousand poems by now that have been inspired by stories she hears from others via email, direct message, or Instagram comment. She spends time each week blindly scrolling and then randomly stopping on a name before taking to her iPad Pro to start digital painting. Like her peachy-pink color palette that varies lightly from post to post, Nichols’s poems are thematic and mostly tackle the quest for identity, the pressure to find it, and the shame of feeling like you haven’t. 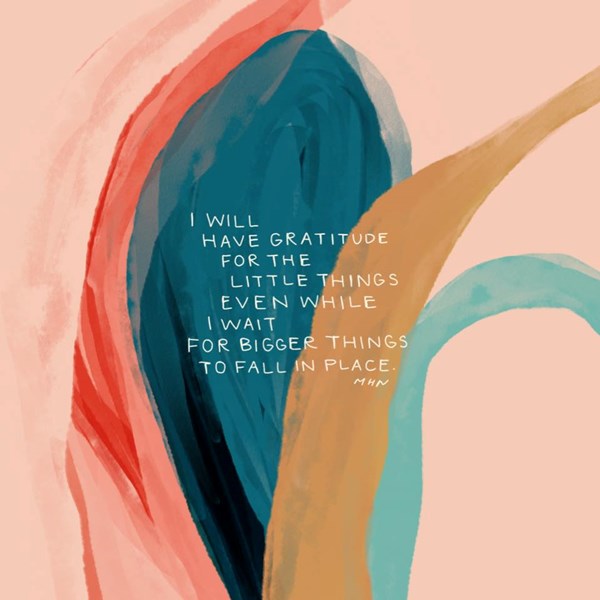 As a result, Nichols's inbox serves as something like a time capsule of life in the late 2010s, especially life for young women. She’s Instagram’s Delilah—not the biblical Delilah, but the radio host Delilah. She listens to others’ stories, empathizes, and then finds just the right words to capture their situation. To Nichols, that’s ministry.

And now, offline readers can get a glimpse of the real-time stream of stories and artwork she creates. Her book, All Along You Were Blooming: Thoughts for Boundless Living, releases this month from Zondervan.

Nichols grew up a “homeschooled preacher’s kid” in a small Georgia town. She said she learned from watching her parents that ministry can happen off a pulpit, too. “I saw my parents just spend so much time with people,” she said. (Her sister, Jamie Grace Harper, is an award-winning CCM singer.)

Despite Nichols’s faith, you won’t find much Scripture in her feed. She said she deliberately avoids “Christianese” out of a desire not to alienate anyone. 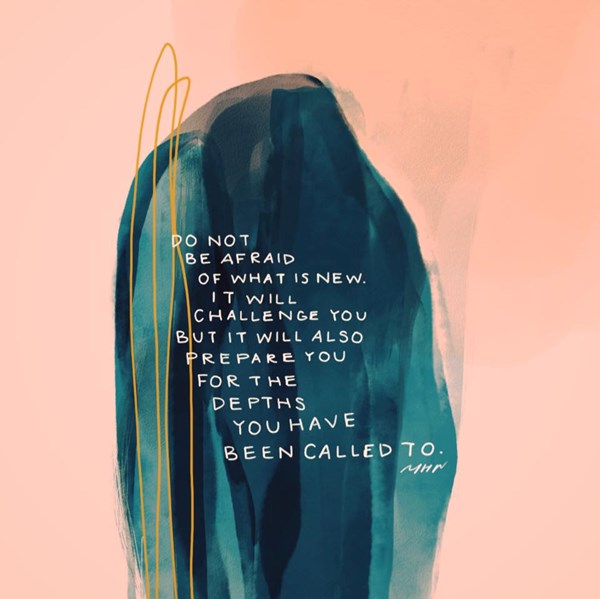 “I try to think about the person who is like, ‘I haven’t prayed in years’ or ‘I’ve had really bad experiences with Christians in my life’; that person is heavy on my heart a lot,” she said. “It’s like the Scripture that talks about ‘peace beyond understanding’ (Phil. 4:7). Lately God has been showing me, ‘Go a little deeper than the words you’ve always known, and I will meet you there.’”

Nichols said she tries to be intentional about ministering to people in her physical spheres with more specific gospel language. But as the lines between private and public continue to blur online, she is feeling the pressure to share more about her “real life” self with her followers.

“I do think the internet could become a better place if we all felt less pressure to go into detail about everything,” she said. But sometimes, she gets messages from followers asking her where she ‘got her art.’ “I want people to know that, hey, I’m a real person,” she said, making a point to include pictures with her face in the mix with the inspirational quotes in her feed.

Ruth Chou Simons has also had to consider the balance between showcasing her work and herself. For years, she had been blogging and Instagramming as @gracelaced—shorthand for how God’s grace is laced into our everyday lives—but recently began using her name.

“When I made the switch, I was a little anxious about it,” she said. “The goal wasn’t … to make a name for myself.”

Simons’s Instagram following, now up to 137,000, grew out of a blog she started years ago as a Christian mom at home with six boys. But she’s an artist by trade, and after graduating from art school, she struggled to find examples of Christians navigating the gallery world in a Christ-honoring way. She turned instead to the internet. 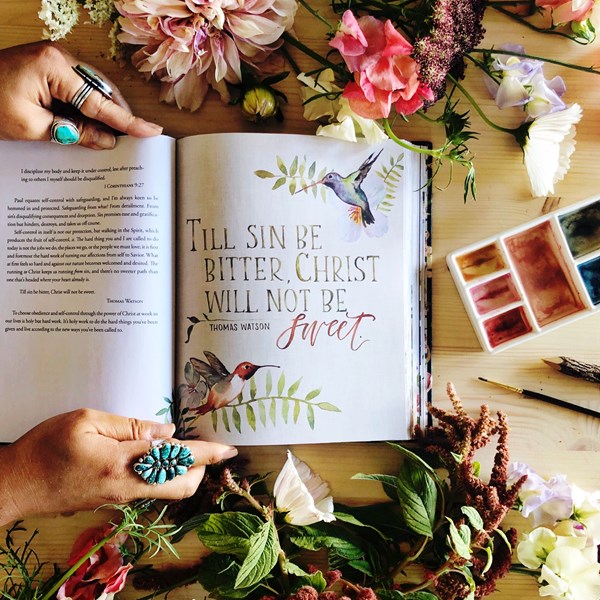 Her feed is populated mostly by beautifully staged photos of her artwork: intricate eight-by-ten-inch paintings of Scripture in calligraphy, usually with the backdrop of natural beauty (flowers, creatures, colors). Sometimes it’s not Scripture, but a hymn lyric or a theological quote.

Her acrylic, oil-on-canvas and watercolor paintings are captioned with her own theological reflections (“micro-blogs,” she calls them).

“It always starts from the overflow of what I’m learning,” said Simons, author of Beholding and Becoming: The Art of Everyday Worship. Her husband, Troy, is a pastor and her closest confidant. Many of her ideas spring from conversations with him or their boys in the family car or around the dinner table.

“The fruit of that ultimately shows up in an eight-by-ten print that might look like I just painted my favorite flowers … but it really comes from so many hours of us discussing what it means,” she said. She’s careful not to cherry-pick verses or lift Scripture out of context. 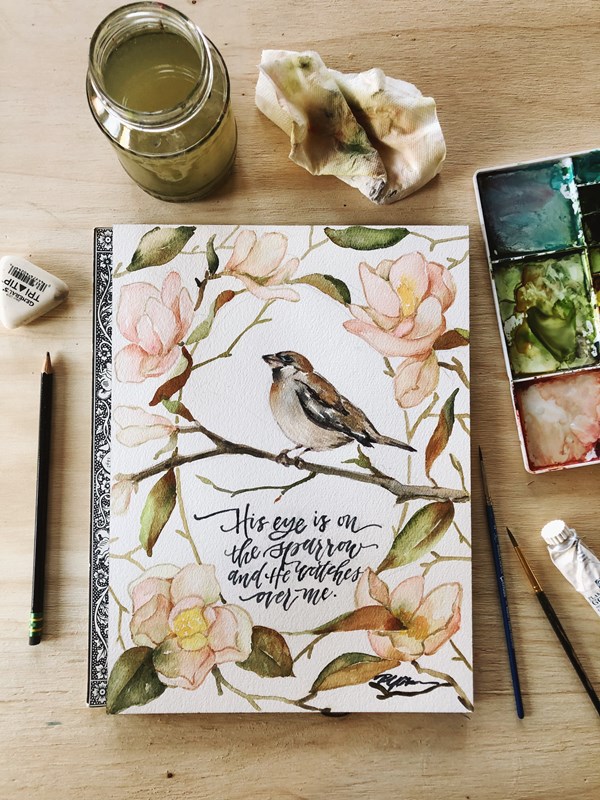 Simons is realistic about the pitfalls of social media, too: Instagram, namely, can inspire envy, shame, and shameless self-promotion. But if Christians are called to be kingdom-builders, surely this corner of the Internet needs cultivating too. She’s up for it.

“Most people are scrolling because they want some kind of distraction,” she said. “So if I want to earn the right to have somebody stop their scroll for five minutes, what is the most generous and life-giving thing I can offer?” The gospel, she answered.

Simons knows that people re-post on Instagram not just things they find beautiful, but things that will say something about themselves. So even though she’s often pressured by followers to share more personal information, she’s reticent. She wants to cast the widest net possible for others to identify with her. “The more specific I get, the more the story is about me,” she said. “If we focus on the way God works, then circumstances matter less.”

The fruit of Simons’s and Nichols’s ministries are different. But with every like, re-post, comment, and follow, both women are planting seeds in what’s arguably the internet’s largest garden.