“Do not fear those who kill the body but cannot kill the soul.” Matthew 10:28
Daniel Harrell|June 12, 2020
Image: Henry Ossawa Tanner / WikiArt

In Matthew’s gospel you find the story about a woman crashing a dinner party. By labeling her a Canaanite (15:22), Matthew connects her to those promiscuous and pernicious Promised Land pagans God commanded Israel to exterminate on account of their idolatry. You can read about it in Deuteronomy 20. The name Canaan belonged to the son of Ham, Noah’s youngest, whose sordid story you can read in Genesis 9. The ensuing “curse of Ham” provides the backdrop for the Deuteronomy edict, but in later centuries, the narrative was exploited as divine warrant for enslaving generations of dark-skinned Africans, arbitrarily labeled Ham’s descendants. In the eyes of most slave traders and missionaries, Africans were uncivilized Canaanites, dogs undeserving of mercy even from God. In the United States, few efforts were made to convert slaves to Christianity until the 18th century, and only then after it was guaranteed that baptism would not alter their status as “property.”

In context, it’s hard to read Matthew’s label of this party-crasher and not hear shrill racial overtones—nobody else in the New Testament ever gets called a Canaanite dog. That it comes from the mouth of Jesus will prove poetically and powerfully ironic, but not without first disturbing our sensibilities. Jesus acknowledges a stereotype that categorized the woman with the worst of outsiders, an enemy of Israel, cursed by God, marked by her color with no hope of anyone seeing her character. Ethicist Stacey Floyd-Thomas once preached how “black lives matter” may be as old as this encounter, though here, to everyone besides Jesus, the woman’s black life does not matter. And yet she persists, undaunted and relentless. “Her black life may not matter, but her black faith does.”

African-American faith was forged in the crucible of slavery. Slave-holding Christians trotted out a Bible they had chained to a culture that diabolically defended the maltreatment of those judged as hardly human. They’d misuse passages such as this from 1 Peter, “Slaves, in reverent fear of God submit yourselves to your masters, not only to those who are good and considerate, but also to those who are harsh” (2:18).

Yet the same Bible exploited by men to enslave black lives also liberated black faith. 1 Peter continues, “It is commendable if someone bears up under the pain of unjust suffering because they are conscious of God. … If you suffer for doing good and you endure it, this is commendable before God” (2:19-20). Slaves heard tell of a God who is Lord of the oppressed, of Jesus, dark-skinned and poor, born to an teenager out of wedlock, wrongfully arrested and hung on a tree by a state-sanctioned mob; but then rightly raised from the dead and victoriously vindicated, all to God’s glory. The horror of the Cross bears its strange fruit in a wondrous and inexplicable capacity to rise above hatred, above prejudice, above injustice and evil with true love, pure grace, and genuine joy. Black Christians suffer and say Sunday is coming. They persevere and put on their praise. Christ died and we thank the Lord for it and call it good news. This is the enduring mystery of the gospel and the heartbeat of black faith.

We read about George Floyd’s faith at work to help troubled young people in Houston’s Cuney Homes housing project. I live in Minneapolis, where George Floyd moved for a better job, struggled at times, and died on the street under the brutal police officer’s knee. Last week, I stood with other clergy, black and white, at the site of Floyd’s death and listened as once again black preachers prayed for peace and for grace and for justice and reconciliation.

To see the power of black faith is to be astonished by its collective capacity for forbearance. As David Remnick put it, “The litany of its great leaders—Frederick Douglass, Martin Luther King Jr., Malcolm X, Howard Thurman, and Fannie Lou Hamer among them—is vastly outnumbered by the anonymous millions who encountered the noose, the lash, the cattle prod, the attack dog, the laws of Jim Crow, and answered it all.” Clear-eyed about their oppressors, they answered most often not to the understandable urge for vengeance, but with a higher resolve to trust the Lord to dispense justice and do mercy.

In Matthew’s gospel, the disciples urge Jesus to send this crazy woman away; she’s a dog who won’t stop barking. But she stays and perseveres, undaunted and relentless. Her black life may not matter, but her black faith does. She presses past barriers for the sake of her sick daughter she wants healed. She falls to her knees and calls Jesus Lord and cries for help. Jesus sets her up by evoking the proverbial prejudice of his day, “It is not right to take the children’s bread and toss it to the dogs.” To which the woman readily replies, “Yes it is, Lord. Even the dogs eat the crumbs that fall from their master’s table.” Jesus exclaims, with a gleam in his eye, mercy on his mind and joy in his heart, “Woman, you have great faith! You request is granted!” The table was turned and her daughter was healed at that moment. (Matt. 15:26-28).

As Howard Thurman once prayed, “Keep fresh before me the moments of my high resolve, Lord, that in fair weather or foul, in good times or in tempests, in the days when the darkness and the foe are nameless or familiar, may I not forget that to which my life is committed.” Black faith matters. 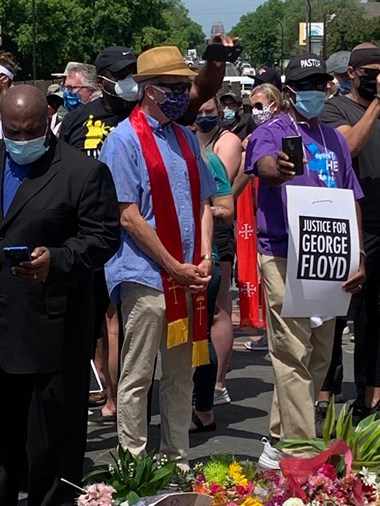 Here in deeply divided Minneapolis—where George Floyd unjustly joined the dead brotherhood of Jamal Clark, Philando Castile, and too many others—protests turned peaceful after nights of fiery upheaval. Black faith perseveres, undaunted and relentless, marching and praying for justice and reconciliation. There’s so much work. Holding up a Bible won’t do it. We have to open it and read it and do what it says. “Blessed are those who hear the word of God and obey it” (Luke 11:28).