Rick Milby has visions of a cross 230 feet tall. It will rise up higher than the nearby Abundant Life Fellowship Church, where Milby was the pastor for more than 30 years. If the church had a steeple, it would rise higher than that too. It will rise above the nearby houses, trees, and factories on the flat Texas landscape, visible from the cars speeding by on Interstate 37. It will rise so high up off the coast of the Gulf of Mexico that airplanes will have to fly around it.

The Corpus Christi cross was supposed to be finished this summer, before funding delays set back the completion date. When it’s finished, though, it will be the seventh structure to claim the title of “tallest cross in America” in the past 30 years.

Milby thinks it’s pretty obvious why someone would want to build the tallest cross in the country. “We’re hoping to convert people and encourage Christians,” Milby told Christianity Today. “People will come from all around to see it, and we’ll baptize them that day.”

Also, things have a way of escalating. Milby’s cross, for example, wasn’t first conceived as the largest in the country. It was just gong to be a large cross.

He was taking the church staff on a retreat in Galveston, and they drove by a cross. The idea grabbed Milby and, after the retreat, the church staff looked into the possibility of constructing their own. They found they’d have to get special permission from the Federal Aviation Administration. 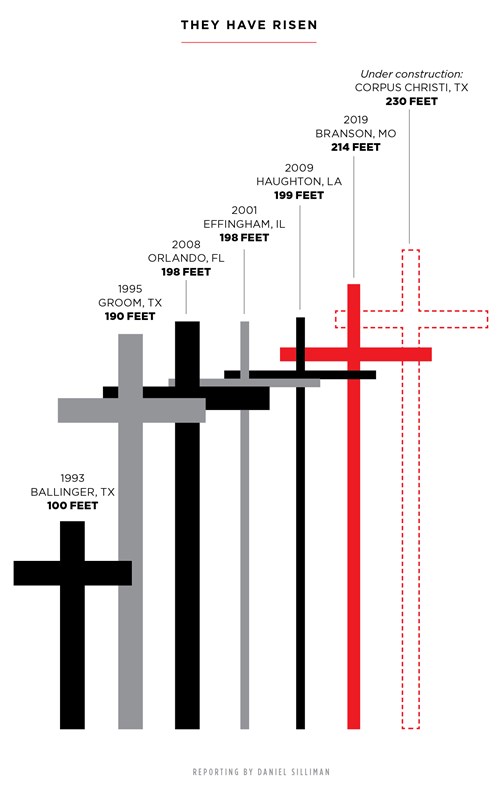 The ministry—now independent from the church—acquired an acre and a quarter of land and started raising money. Then the project grew in other ways.

Current plans include a life-size replica of the Garden of Gethsemane and the tomb where Christ was laid after his crucifixion. There will be a baptismal pool and a place to pray. Organizers considered building a wedding venue but nixed the idea so they wouldn’t have to host same-sex marriage services. Milby thinks the final plans will involve a life-size nativity scene with a sound system playing hymns.

The 71-year-old former pastor doesn’t know when the project might be finished, but he’s laid the foundation with 870 tons of concrete. He’s raised about $250,000, and he has the schematics for the cross, made out of five sections of steel. He can see how it will stand when it’s done: a 230 feet witness to the saving power of the death of Jesus and a claim to the title of tallest cross in America.

@Danielsilliman
This article is from the May/Jun 2020 issue.