The dining table was set for a fine yet intimate family dinner, accented by festive holiday decor and aglow with candlelight.

The aroma of food filled the cozy Canadian home, along with family chatter after a Saturday out braving cold temperatures and Christmas crowds in the city.

I asked the hostess if I could help with anything. “No, you’re our guest,” she warmly replied. “We’re almost ready.”

As I wandered into the dining room and saw the picture-perfect place settings, tears filled my eyes. “To be given a seat at the table—any table—is one of life’s greatest gifts,” I thought to myself. “To be given a place at this table? A miracle.”

On the surface, this looked like a scene from a Hallmark movie or a holiday commercial. In the shadow of an elegant Christmas tree, the host couple prepared dinner together while the laughter of their children mingled with Christmas carols in the background.

The backstory, however, was far from picture perfect. And the hospitality being extended to me—perhaps the unlikeliest of invitations I’d ever received—had not come without a significant cost.

The hostess was Lori Anne Thompson—a woman who was groomed and sexually abused in 2014–2016 by my then-boss, Ravi Zacharias, who had been a world-renowned Christian apologist. The guest was yours truly—I had been the spokesperson for Thompson’s abuser throughout the abuse crisis. Indeed, for years I was part of the machine that nearly crushed her family.

It is hard to overstate how brutally the Thompson family had been treated by Zacharias and the ministry he led—or how far reaching the consequences of this injustice inflicted upon them extended.

When Lori Anne and her husband, Brad, confronted Zacharias in 2017 about his predatory behavior, Zacharias filed a RICO lawsuit against them and set out to destroy their reputation in the courts of law and public opinion. Lori Anne’s bravery paved the way for numerous other women to come forward in 2020—and an investigation confirmed in 2021 that Zacharias was a serial sexual predator who harmed many people.

So here we were on a December evening in Canada. It was the final night of my stay at the Thompson home, a visit that capped off a roller coaster year—or four years, rather—that had left me heartbroken and dismayed yet curious and determined to learn from survivors even as I learn to advocate for them.

In fact, my visit, our first time ever meeting in person, was exactly four years to the day of the infamous December 3, 2017, statement in which Ravi Zacharias and RZIM denied wrongdoing and maligned Lori Anne and Brad.

That statement—a false narrative first published by Christianity Today—spread like wildfire throughout the globe and amounted to what Thompson described to me as a “death sentence” against them.

“We almost didn’t survive that,” she told me.

But miraculously, against all odds, they did survive. Despite the crushing weight of character assassination, the mockery of their marriage by those who claimed the moral high ground, the slick PR campaigns designed to discredit their testimony, the Christian celebrities who lined up to support their abuser’s account while they were silenced, and the threats to “sue them into oblivion” funded by “donors with deep pockets” (phrases Zacharias would oft repeat)—here they were, still standing.

“There is a reason we are referred to as ‘survivors,’” Lori Anne shared with me, recounting the horrific nature of abuse. “Many don’t make it.”

The contrast between reality and the lies I’d been told about this kind and gracious couple was almost too jarring for my mind to comprehend. For years, Zacharias had portrayed the Thompsons as “two very wicked human beings” who were “serial extortioners” engaged in “satanic type slander and falsehood”—and other leaders were eager to propagate this narrative. Sadly, too many people still believe a version of this account, something I’m reminded of frequently.

As one who is still wrestling with my own complicity from years in a toxic system that covered for the powerful man at the top while silencing the victimized women who sought justice, to be welcomed by the Thompson family was no small thing. It is something I would’ve thought impossible just a year ago.

“We never thought ill of you,” Lori Anne assured me as I choked back tears at the dining table. To be lavished with such compassion? Overwhelming. I felt so undeserving yet deeply grateful.

I never imagined I’d go from being a spokesperson to a whistleblower in a Christian organization known for its pursuit of truth, and I certainly never expected to be embraced by the very people who were most harmed by the man I worked for and the ministry he founded. To be given such grace is one of the most meaningful gifts I’ve ever received.

Describing our visit, Thompson tweeted, “These past few days have brought fresh revelations of profound predation; shared insights from opposite ends of the cane that crushed us; and collective wide eyed wonder, of the souls that survived it all. Truth has tucked its toes under our table, and supped in peace.”

During this season, we tend to love stories that have bows on them, where every element ties neatly together and even the Grinch’s heart grows three sizes in a day. But healing and growth take time, and sometimes the miracle isn’t in a perfect ending but in a trajectory that has reversed course and is starting to see hope on the horizon.

Even as Lori Anne and I both continue on the path to restoration, with much still to grieve and lament , our time together felt like a significant step toward understanding and wholeness.

She is right. There is an immense cost to listening to survivors, to believing their voices enough to journey alongside them in pursuit of justice, to reckoning with our own complicity in a system that has further harmed those already victimized.

It’s costlier still to forgive those who have wronged you, to love those who are different than you, to offer a seat at your table to an unlikely and undeserving guest.

It’s costly and risky, and sometimes pursuing reconciliation is premature and unwise. But when genuine restoration takes place, it’s beautiful. As we leave familiar circles to forgive and love and invite others into our own lives, we follow the example of the one whose birth we celebrate: the one who left his heavenly throne and entered a dark world to live as a human, die a sacrificial death, and offer us, his enemies, the gift of life eternal—adoption into the family of God. It is the unlikeliest of invitations. It is the miracle of Christmas.

There was nothing “Hallmark” about that first Christmas—our Savior born in a time and region marked by scarcity, social unrest, political division, and even pending infanticide. The life of Christ, Word becoming flesh and dwelling among us, was a miracle of all miracles—but it was a bloody one. It cost our Savior his life to welcome us into his kingdom, even as it costs us daily to follow him.

Psychologist Diane Langberg says, “To truly follow Christ is to set forth on a journey of ever-expanding benevolence, from the narrow limits of familiar territory into the dark and unfamiliar world of the oppressed and suffering—and to people often unlike ourselves.” 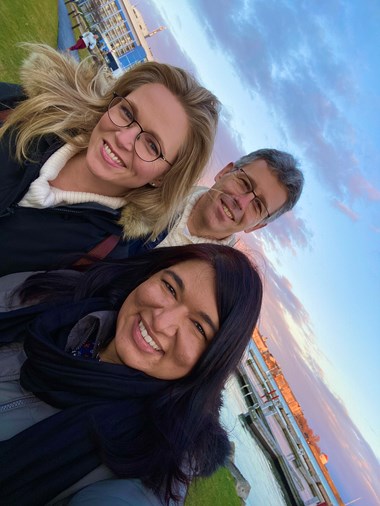 Ruth Malhotra with the Thompsons in December 2021

Such benevolence means we must not overlook the pain, injustice, and trauma in our fallen world that make Advent that much more significant—a lesson survivors continue to show me in this journey. As Lori Anne reflected, “We mustn’t miss the misery that precedes the manger and how much Christ meets us in our oppression.”

The Christmas story reminds us that there is indeed light shining in the darkness, that beauty can be found in the most unexpected places, and that miracles do happen amid the mess and mire of real life. My visit with the Thompson family this month provided a glimpse of that. It is because “God and sinners reconciled” some 2,000 years ago that Lori Anne Thompson and I can be friends today. It is because “in his name all oppression shall cease” that all who follow Jesus must work together to pursue justice for the abused and freedom for the captive.

It is because “he appeared and the soul felt its worth” that the message of Christmas—Immanuel, God with us—gives us hope in this life and the next. It is because “God is not dead, nor doth he sleep” that we have confidence “the wrong shall fail, the right prevail, with peace on earth, good will to men.”

In this season of celebration and joy, may we learn to lament the consequences of sin and meet each other in our suffering, even as we work toward justice and long for the reign of our coming King.

Ruth Malhotra is passionate about helping Christians communicate truth with clarity and grace. She managed public relations at Ravi Zacharias International Ministries from 2013–2021.

Ruth Malhotra with the Thompsons in December 2021