According to the US Census, the average American couple gets married around the age of 30. Many young adults believe that forming unions closer to that age reduces their risk of divorce, and, indeed, there is research consistent with that belief. But we also have evidence suggesting that religious Americans are less likely to divorce, even as they are more likely to marry younger than 30.

This paradoxical pattern raises two questions worth exploring: Is the way religious Americans form their marriages different than the way their more secular peers do? And do religious unions formed by 20-somethings face different divorce odds than those formed by secular Americans in the same age group?

The answer to that last question is complicated by the role of cohabitation in contemporary family formation. Today, more than 70 percent of marriages are preceded by cohabitation, as Figure 1 indicates. Increased cohabitation is both a cause and a consequence of the rise in the average age of first marriage. But what most young adults do not know is that cohabiting before marriage, especially with someone other than your future spouse, is also associated with an increased risk of divorce, as a recent Stanford study reports. 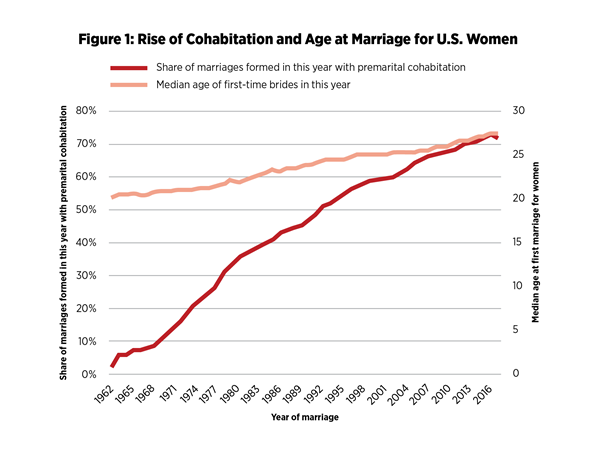 One reason that religious marriages in America may be more stable is that they reduce young adults’ odds of cohabiting prior to marriage, even though they increase their likelihood of marrying at a relatively young age. With that in mind, we’ve explored the relationships between religion, cohabitation, age at marriage, and divorce by looking at data from the National Survey of Family Growth (NSFG).

Does religion influence marriage and cohabitation?

To address this question and others, we merged data from the National Survey of Family Growth (NSFG) from 1995 to 2019, using responses from over 53,000 women ages 15–49. After controlling for a variety of background factors, women who grew up religious are about 20 percent less likely to begin a cohabiting union in any given year than their nonreligious peers. By age 35, about 65 percent of women with a nonreligious upbringing had cohabited at least once, versus under 50 percent of women with a religious upbringing. 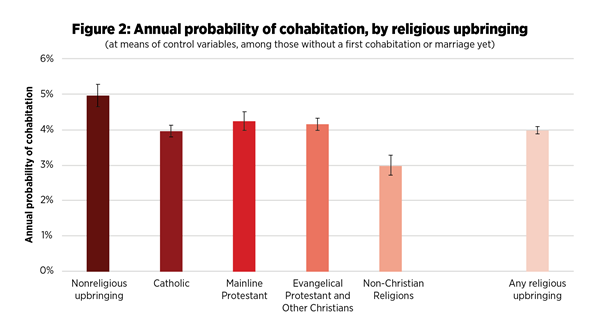 Not only does religion reduce the odds that young adults cohabit, it also increases the odds of what we call direct marriages, or unions that didn’t include premarital cohabitation. The trends depicted below in Figure 3 show up in similar form for all marriages, but direct marriages are particularly important because they are a closer proxy for the “traditional” relationship pathways promoted by many religions. 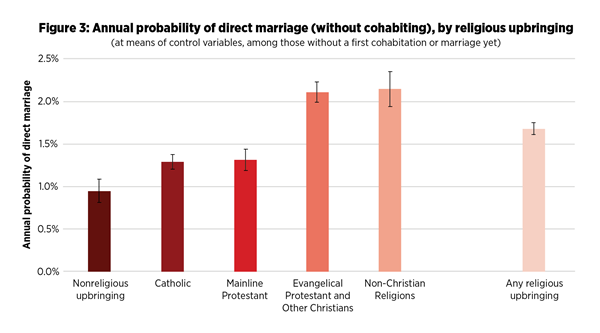 In other words, religiosity is associated with a markedly higher likelihood of going directly from singleness to a married union without cohabiting ahead of time, and generally at younger ages.

On the whole, then, religion greatly influences the nature and age of relationship formation.

Does religion influence breakup and divorce?

Earlier marriage is a known risk factor for divorce. Premarital cohabitation is too. Since religiosity tends to motivate earlier marriage but less cohabitation, the effects on divorce are not easy to guess. What we really want to know is: Do religious people get divorced less?

The answer appears to be yes.

Without controls for age at marriage or an indicator for premarital cohabitation, women with a religious upbringing do have slightly lower likelihoods of divorce. As shown below in Figure 4, the annual divorce rate among married women with a nonreligious upbringing is around 5 percent. For religious women, it’s around 4.5 percent. The effect is clearest for Catholic and mainline Protestant women and less clear for evangelical Protestant women. 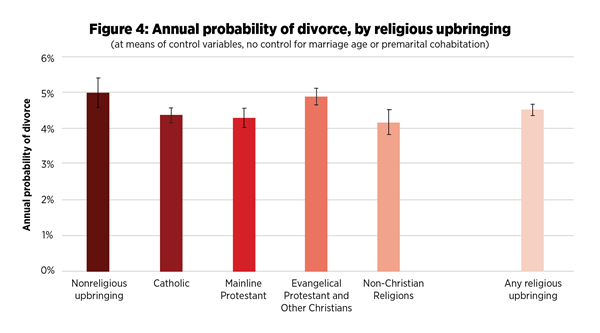 Adding controls for age at marriage yields about the same results, suggesting that even though religious people get married younger, their divorce rates are still a bit lower. But it may just be that religious people cohabit less, and that drives the reduction in divorce. (For additional details on this point, see the full research brief here.) 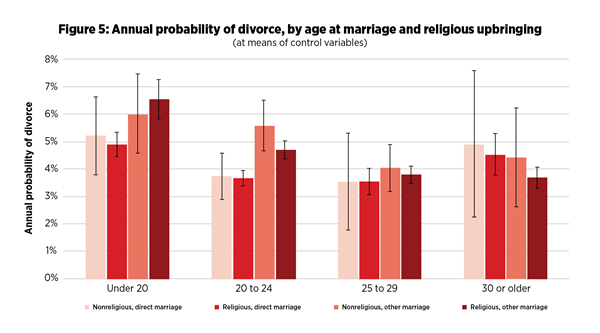 Starting with premarital cohabitation, women with direct marriages tended to have lower divorce rates than women with the same religious background and the same age at marriage but who married after cohabiting. This was especially true for religious women who married before age 25.

For women marrying after age 30, the relationship seems to flip, though estimates are less reliable. But particularly for youthful marriages before age 20 or in the early 20s, cohabiting before marriage appears to be a major risk factor for divorce.

What are the takeaways, then?

Among some groups, it’s commonly believed that postponing marriage until the late 20s or early 30s reduces the odds of divorce, because greater maturity results in a wiser choice of partner. There’s some truth to this. However, the life orientations associated with delayed marriage are often also associated with (and even causal of) greater acceptance of premarital cohabitation, which is also linked to a higher risk of divorce.

The net result: Lifestyles that motivate earlier marriage—like religiosity—do not necessarily create the higher likelihoods of divorce usually associated with early marriage, because they discourage cohabitation.

Yes, very young marriage still has risks (as does very late marriage), but religious upbringings seem to partly compensate for those risks, especially among women marrying in their 20s.

Our results also suggest that religion fosters relationship stability by pushing young adults away from cohabitation, which is highly unstable, and toward marriage, which is much more stable.

Figure 6 provides a simple illustration of divorce or breakup risk by year, by union type. 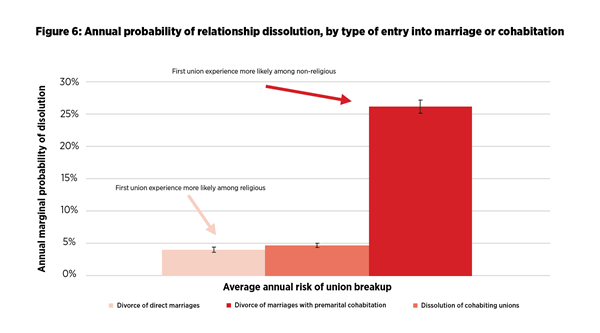 The effect of cohabitation on marriage is indeed statistically significant, since premarital cohabitation increases divorce probabilities by about 15 percent. But the biggest effect of religion on union stability isn’t about what happens once a woman is married. It’s more about her relationship choices before marriage—the fact that she did get married, rather than start a series of cohabiting relationships.

What remains unclear is how religion may foster more stable marriages. There are three broad possibilities: Religion might induce people to “make lemons out of lemonade.” It might give people institutional or community support. Or it might positively alter the quality of romantic pairings.

The first explanation is simple, if pessimistic. The second possibility is that religion actually changes the experience of being married. Religious communities might provide institutional support to married couples, by way of peer support, community or pastoral interventions, and even material or financial support in times of hardship.

First, women of faith may be able to access a larger and more marriage-friendly pool of potential spouses in church and related community settings.

Second, religion could alter the criteria that women have for selecting partners. Knowing that cohabitation is disfavored, and desiring the companionship of a committed union, religious women might more actively pursue “husband material” earlier in life than other women.

Third, religion might alter the dynamics between partners in important ways. Faithful women might look for spouses who share values, beliefs, or practices that are important for marital stability. Sharing these values might reduce the potential for conflict down the road.

It’s hard to say exactly which of these factors is at work. But one way or another, our research suggests that waiting to marry until you’re 30 does not always increase your odds of forging a stable marriage. Especially for religious men and women who avoid cohabitation, our analysis of the NSFG material indicates that they can marry in their 20s without increasing their risk of divorce.

The upshot of all this is that the religious model of marriage and family appears to boost the odds that young adults can marry before 30 without increasing their risk of landing in divorce court.

Lyman Stone is a research fellow at the Institute for Family Studies, chief information officer of the population research firm Demographic Intelligence, and an adjunct fellow at the American Enterprise Institute.

W. Bradford Wilcox is the director of the National Marriage Project at the University of Virginia and a senior fellow at the Institute for Family Studies.