Without Henrietta Mears, Evangelicalism as We Know It Probably Wouldn’t Exist

Meet the woman who mentored the leaders and fostered the institutions that fueled its 20th-century transformation.
Arlin C. Migliazzo|March 11, 2021
Image: Courtesy of Arlin C. Migliazzo / Edits by Mallory Rentsch

In the late summer of 1949, a troubled Billy Graham left his home in Minneapolis for Southern California to keep a promise made in more optimistic times to Henrietta Mears, the director of Christian education at the First Presbyterian Church of Hollywood.

Unfortunately, in the months since the Youth for Christ evangelist accepted Mears’s invitation to address a convention of college and university students at her conference center, life seemed to crash in on him. Not only had his recent search for the right graduate program proved futile, but his June revival campaign in Altoona, Pennsylvania, endured a series of problems and ended in disarray.

The core of Graham’s distress, however, proceeded from his growing unease regarding the accuracy and authority of Scripture. Nonetheless, during the last week of August, the despondent 30-year-old found himself a mile high in the San Bernardino Mountains as the featured morning speaker at Forest Home for the third annual College Briefing Conference.

Although his messages appeared to be well received, Graham could often be found praying with Mears, seeking counsel regarding his way forward, which appeared increasingly charged with difficulties. Her grasp of biblical truths, awareness of modern scholarship, and unwavering commitment to the veracity of Scripture deeply impressed him, and he absorbed every insight she could provide.

Finally, one evening late in the week, Graham directly confronted his most sincere doubts and greatest fears, thereby opening the door to a powerful renewal of faith that immediately transformed his ministry.

Just a few days after his life-changing experience at the conference, Graham drafted a letter to Mears, which expressed in no uncertain terms his appreciation for all that the week meant to him: “It was really terrific! I have never been in anything like it. There was a deeper, more sincere and genuine moving of the Spirit of God than I have ever witnessed. God has indeed given you a tremendous ministry. You shall be in our daily prayers that He might continue to use you for His glory. … I shall always treasure those hours in my memory as hours spent with the Lord.” Although he could not yet imagine how formative his relationship with her would be for the future of Protestant Christianity, he seemed to sense instinctively that his relationship with her had just begun.

A new brand of ecumenical Protestantism

Less than a month later, Graham began the landmark Los Angeles Crusade, which vaulted him to national prominence. The young evangelist would become the most recognizable figure among a cadre of Christians credited with rejuvenating theologically conservative Protestantism in the wake of the Second World War.

The great irony in its postwar resurgence, however, lay in the debt that nearly every notable leader of that movement owed to the precedents set and relationships nurtured by Mears, the diminutive, physically impaired former midwestern science teacher on whom Graham leaned so heavily during his week of greatest trial. In the half century between 1913 and 1963, she either founded, significantly inspired, or actively participated in a formidable array of church-related organizations and trained two generations of believers who would remake theologically conservative Christianity.

Her birth on October 23, 1890, in Fargo, North Dakota, completed the family of Elisha and Margaret Mears. The youngest of seven children, Henrietta grew to maturity in a loving family environment simultaneously permeated by piety across four generations. Her father, born in Poultney, Vermont, came from a family that sank its roots deep in the civic and religious life of the young republic, while her mother inherited a Christian faith that valued both personal spiritual growth and active social service to the greater Chicago community.

Although her family started out among the upper midwestern privileged class, by the time Henrietta began her formal education, it was facing a series of financial reverses. The Mears family ultimately relocated to Minneapolis, finding a church home at the city’s First Baptist Church, which was led by noted fundamentalist William Bell Riley.

Henrietta grew to young womanhood under Riley’s powerful influence. She graduated from the University of Minnesota in 1913 and embarked on a career in public education, serving two rural school districts before returning to Minneapolis and First Baptist in 1917. For the next decade she taught science and mathematics while building a Sunday school class of less than 20 college-age women into the largest class in Riley’s church. Well before she left Minneapolis for Hollywood in 1928, the enrolled membership of over 500 had prompted the church’s leadership to build an entire auditorium to house her Fidelis class.

During this pivotal period, Mears moved away from Riley’s confrontational, anti-intellectual fundamentalism by recasting the relationship between faith and culture. Her remarkable articulation of that relationship would thoroughly reform theological conservatism over the course of her 35-year tenure at Hollywood’s First Presbyterian.

Mears was firmly committed to central doctrines of historic Protestantism, including the consequences of universal human sinfulness; the unmerited favor of God demonstrated toward humanity through the life, death, and resurrection of Christ; and the absolute authority of the Bible—all hallmarks of early 20th-century fundamentalism. Nevertheless, she emerged as a commanding presence at the forefront of a new brand of ecumenical Protestantism that championed thoughtful engagement with the churched, the unchurched, and secular culture in groundbreaking, sometimes stunning, ways.

Her aptitude for stepping across long-standing religious boundaries with skill and grace generated new prospects for Protestant Christians. In so doing, she invented modern evangelicalism and modeled it decades before the outbreak of WWII in September 1939. Her innovative practices provided a template readily emulated by the corps of leaders that came into its own under her tutelage. 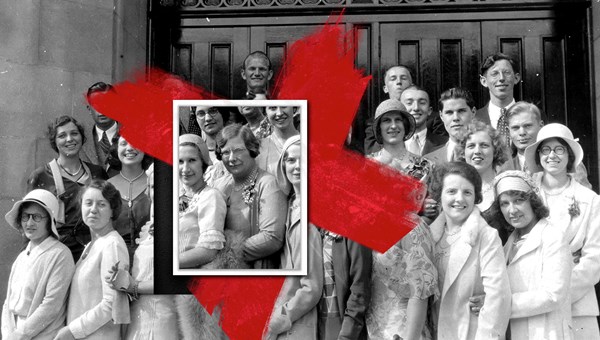 Mears motivated young women from her Fidelis Sunday school class in Minneapolis to live out their faith fearlessly in the world. They and hundreds of others trained by her (or by her protégés) became an integral part of the renewal of theological conservatism that formed in the wake of the fundamentalist-modernist controversy of the 1910s and 1920s, grew to prominence in the 1940s and 1950s, and continues to affect American culture in the 21st century. Her predominant role in the revitalization of evangelical Christianity helped transform the lives of thousands and opened a new direction for Christian orthodoxy that remains viable today, six decades after her death. And she did all this with a generosity of spirit worthy of imitation.

Excluding his mother and wife, Billy Graham called Mears the greatest female influence on his life and one of the greatest Christians he ever knew. Bill Bright, founder of the international ministry of Campus Crusade for Christ, patterned his lifework on principles he gleaned from her. Jim Rayburn, the visionary behind the Young Life Campaign, fashioned his ministry to high school students around what he learned from Mears, remarking that “she was my teacher long before she ever heard of me … I tried my best to do things the way she would want them done.” Wilbur Smith, who cofounded Fuller Theological Seminary and taught an “English Bible” course there and at Trinity Evangelical Divinity School, called her “the most inspiring woman leader in Christian causes that I have ever known.” His colleague at Fuller, professor of homiletics Clarence Roddy, branded Mears the greatest preacher in Southern California. Leaders of two of the most influential postwar ministries to athletes—the Fellowship of Christian Athletes and Athletes in Action—came from her college-age Sunday school class at First Presbyterian.

In addition to her work there, Mears embarked upon many other major ventures. She founded Gospel Light Publications, which grew into one of the country’s largest independent religious publishing houses. She negotiated the purchase of a Southern California resort, which under her steady hand became a major interdenominational conference center that today hosts upward of 60,000 participants annually at multiple sites. She authored Sunday-school curricula used by thousands of churches around the world and helped launch the first organized ministry to the entertainment industry. She administered deputation service programs developed initially for Christian youth to help underserved populations in Southern California but eventually expanded to encompass other areas of need, including war-ravaged Europe and Asia. She was an early leader of the National Association of Evangelicals—serving as a charter member of the association’s Commission on International Relations—and a seminal force behind the formation of the National Sunday School Association. She created a nonprofit foundation to strengthen Christian education programs worldwide and train indigenous leaders using their own languages.

A sought-after speaker, Mears regularly addressed audiences across the country and overseas on topics ranging from Christian youth work and leadership to church growth and evangelism. She carved only enough time out of her hectic schedule to author short articles, but her collected lesson materials and related notes have been in print since their release in book form. More than four million copies of her most popular volume, What the Bible Is All About, circulate today in at least four different editions. Wheaton College and Fuller Theological Seminary each invited her to teach Christian education, even though she had no formal training in biblical studies or theology—and no graduate study in any subject.

Nearly 400 students from Mears’s renowned “Hollywood Pres” College Department went into full-time Christian ministry, and hundreds more emerged as important civic and business leaders who served local churches as active laypeople. Because she prompted such an enthusiastic following over three and a half decades, many of her evangelical perspectives reproduced themselves in Presbyterian pulpits and ministries up and down the West Coast. She had sent so many evangelicals to Princeton Theological Seminary by the mid-1950s that they were perceived as a breed apart and tagged “West Coast Presbyterians.” So pervasive was their presence that at least until the late 20th century, the seminary’s student directory was better known colloquially as the “fundy finder.”

Looking at Mears’s era as compared to today, it’s only natural to draw certain parallels. Although her life spanned a volatile and rancorous period in American history—one not that dissimilar to our own—she modeled an unusual degree of charity and grace. Between the 1910s and 1960s she remained on the frontline of Protestant Christians willing to engage secular American culture in ways that set her apart from those who advocated a bellicose separatism between true Christians and everyone else. She veered off the path taken by her iconoclastic contemporaries toward a gentler but no less orthodox expression of Christianity.

Rather than erect barriers, Mears fashioned bridges to connect in innovative, sometimes startling ways, and she did so with a generosity of spirit often absent from theologically conservative American Protestants. In so doing, she championed evangelical orthodoxy while simultaneously defending the necessity of intellectual vitality, embracing domestic and international social service, eschewing inflammatory rhetoric, and forging alliances with those quite different from herself. Twenty-first-century Americans, whether people of faith or not, could do worse than to emulate her uncommon grace in dangerous and uncertain times.

Arlin C. Migliazzo is emeritus professor of history at Whitworth University in Spokane, Washington. This article is adapted from his book Mother of Modern Evangelicalism: The Life and Legacy of Henrietta Mears (Eerdmans) ©2020. Reprinted by permission of the publisher.

Without Henrietta Mears, Evangelicalism as We Know It Probably Wouldn’t Exist

Without Henrietta Mears, Evangelicalism as We Know ...