‘Carol of the Bells’ Is More Than a Christmas Favorite. It’s a Ukrainian Cry of Independence.

Composed during World War I, “Shchedryk” folk song has survived the Nazi, communist, and now commercial eras to remind and revive the ties of hearth and home.
Nadiyka Gerbish and Yaroslav Hrytsak|December 22, 2022
Image: Left and Center: Lusya Stetskovych / Right: Kateryna Borysyuk
Illustrations from A Ukrainian Christmas

Adapted from A Ukrainian Christmas (Sphere 2022):

But as Ukrainians bear the onset of winter cold, hearts are warmed by their millennia-long participation in the caroling tradition. And while “Shchedryk”—better known as the popular “Carol of the Bells”—has become one of the gems of world culture, many Ukrainian carols have a distinct trace of sadness to them.

One illustration is “Ne Plach, Rakhyle” (“Don’t Weep, Rachel”), one of the oldest in Ukraine. Referencing the Old Testament tragedy re-enacted by King Herod, the carol has comforted us in our many times of suffering. And today its lyrics tell the modern history of the Russia–Ukraine war: Ukrainian children are dying due to “Love for Ukraine—is all their fault, all their fault.”

Yet music has a special ability to create an atmosphere and transfer a feeling across space and time. For Christians, it is also the instrument through which God expresses the unspeakable, and a few chords can give us a glimpse of Paradise. No wonder the shepherds received the news of the newborn Messiah through angels singing! 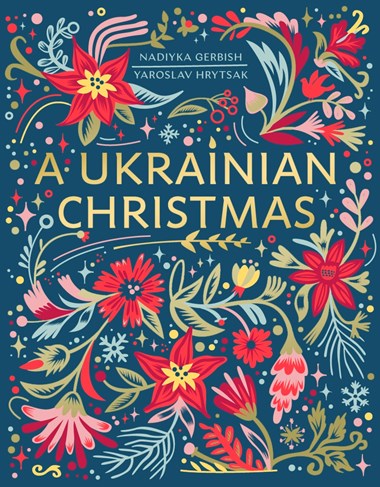 The first mention of a Christmas carol dates back to 129, a time before Christmas existed as a holiday. In that year, the then-Bishop of Rome announced that “in the Holy Night of the Nativity of our Lord and Savior, all shall solemnly sing the Angel’s Hymn.” In the fourth century the first religious Christmas carols began to appear in Rome. They were written in Latin so would not have been understood by ordinary people.

In contrast, it remains a mystery when Christmas folk songs appeared. It seems plausible that they may have been based on pagan songs, not least because their names—“carols” in English, julmusik in Swedish, and koliady in Slavic languages—are associated with pagan customs. “Carols” comes from the Greek choros, the name of the songs performed in a circle dance; julmusik from yule, the name given to the midwinter holiday of the Germanic people; and koliady probably from calendae, the Roman name for the midwinter holiday. According to another, less likely explanation, it comes from Koliada, the Slavic pagan god of winter. Their pagan roots are confirmed by the fact that the oldest of these Christmas folk songs do not contain Christmas plots.

In the Ukrainian language, this type of Christmas folk song is called shchedrivky. There is an ongoing debate among scholars as to whether shchedrivky and koliady are two different genres or two varieties of the same genre. But it’s clear that the Ukrainian people distinguished carols that were based on the gospels, and only sung in church, from those Christmas songs that were sung door-to-door, offering good wishes for a bountiful harvest, happiness, and the good health of the household.

Most of the carols we know today, however, are not translations but original works. They are overgrown with new plots and images, which were not, and could not have been, hymns in the Latin church because they reflect the circumstances of the lives of ordinary people in Germany and neighboring lands. In folk carols, Christ is born in winter among the frosts and, together with Mary and Joseph, suffers from the cold. Special emphasis is placed on the poverty of the Holy Family. They can’t find a place to sleep, they are driven away like beggars and not allowed into the houses, until the poorest innkeeper takes them into his stable. 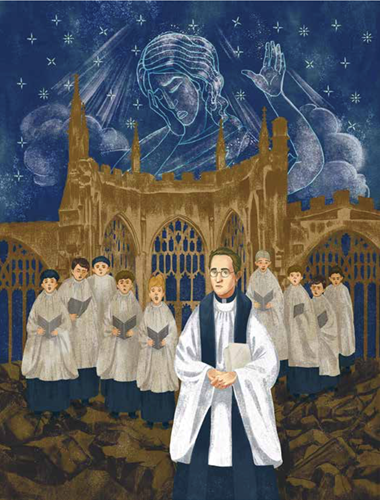 Illustration from A Ukrainian Christmas

Similarly, Jesus, Mary, and Joseph themselves are depicted not as Judean but as representatives of local European nations, as if Christmas took place not in Judea, but in German, Polish, Czech, or Belarusian and Ukrainian lands. This same domestication of Christmas and its stories took place in other continents with the spread of Christianity, and almost every national culture has its own carols.

The last 200 years have become a new chapter in the history of carols, with some ironic and unexpected twists. Since Anglo-Saxon popular culture has become global, English carols are now heard all over the world. Some of them are borrowed and translated from other cultures, such as the Austrian “Stille Nacht” (“Silent Night”). But thanks to this borrowing, they have become famous worldwide.

And “Shchedryk” is a perfect example.

“Carol of the Bells,” best known in Mykola Leontovych’s arrangement, is a shchedrivka—that is, it has no Christian meaning. It originated in pre-Christian times and is not actually a Christmas song but a New Year’s song heralding the beginning of spring, telling the story of a swallow’s flight. We do not know how this shchedrivka originally sounded or what it was called. According to one version, Leontovych heard it in Ukrainian Podolia; according to another, in Ukrainian Volyn. His first arrangement was performed in 1916 in Kyiv, but its rise to worldwide fame is connected with the Ukrainian national revolution.

Despite having fought several armies at the same time, the young Ukrainian People’s Republic suffered from a lack of international recognition. So Ukrainian leaders came up with the idea of sending a Ukrainian choir abroad under the direction of Oleksander Koshyts. The Ukrainian songs performed by this choir were to serve as an advertisement for the Ukrainian cause, and cultural diplomacy was to replace political diplomacy.

The choir went on a three-year tour, visiting ten European countries. They were heard by the American impresario Max Rabinoff, who in 1922 invited the choir to perform in New York City at the famous Carnegie Hall. Before the end of the first act, the choir performed “Shchedryk,” and this performance received rapturous applause.

In a review of the concert, The New York Times wrote that Ukraine’s music “suggested the colossal wealth of youthful and untouched vitality which had tided over centuries of the most tragic history in the world.” 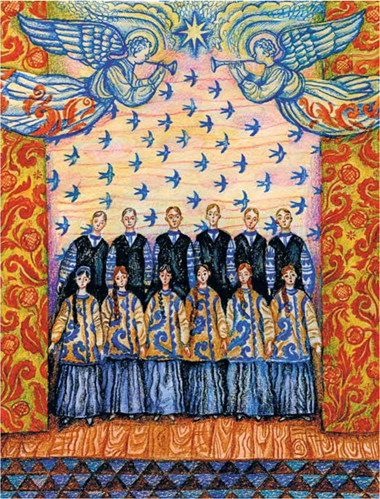 Illustration from A Ukrainian Christmas

An American composer of Ukrainian origin, Peter Vilguski (Petro Vilkhovskyi), heard the choir sing “Shchedryk” and translated the song into English, calling it “Carol of the Bells.” This version has been used an incredible number of times in advertisements and movies—the most famous being the Hollywood hit, Home Alone. The most unique performance was by a group of NBA basketball players who recreated the rhythm of the song by bouncing basketballs on the gym floor.

Although this carol became popular in the West, it was little known in Ukraine until after the fall of communism. Despite the fact it did not have Christian symbolism, the Soviet authorities still considered it religious. After making a long journey around the world, it was revived and “Shchedryk” finally returned to its homeland.

In addition to global expansion, the recent secularization of Anglo-Saxon culture has contributed to the fact that during the holiday period, carols are now heard everywhere: at concerts, on the radio, from loudspeakers in crowded malls embellished with sleighs, colorful packages, and chubby grandfathers in red suits. They have become part of the cultural code of the modern secular world.

But over time, in the cozy world that followed the Great War, when refrigerators and electric stoves became available to everyone, there was no longer the same need for family gatherings at a large dinner table. And yet, to this day, every Christmas Eve, when the shared dinner and the soft lighting of candles reappear, and the familiar Christmas songs of childhood can be heard, the family returns.

Such a bright tradition has been preserved primarily in Central and Eastern Europe. However, the history of carols is different there than in the West.

Communist and Nazi regimes, each for different reasons and motives, did not tolerate church carols. For the Communists, any religion was a relic and their intolerance of the caroling tradition was further exacerbated by the fact that it came from the “hostile West.” For the Nazis, carols were reminiscent of the Jewish roots of Christ and his family. But since Christmas carols remained a popular folk genre, both communists and Nazis tried to take advantage of their popularity for their propaganda. For this reason, in the texts of former Christmas carols, Christian images and symbols were changed so that in the USSR they acquired a communist message and, in Germany, a Nazi one.

Today, the majority of people in the Western world know the words of the most popular carols and can sing them. But this does not mean that they believe in Christ, as Christmas songs have become highly commercialized.

Yet there are still areas where the Christian Christmas has not been completely eradicated by communism or commercialized by capitalism. One of them is Galicia within the former Austrian borders—that is, parts of current Ukraine and Poland. The Galicians were lucky, at least in the fact that communism came to them later than to the rest of Ukraine as a result of the Second World War and being annexed by the Soviets. Those who want to hear carols or learn to sing them can still go to Lviv or Krakow, or better still, to a Galician town or mountain village where Christmas remains almost the same as a hundred or more years ago. But you’ll have to hurry because commercialization is already reaching these parts, too.

Ukrainian Christmas traditions, music, and culture are deeply rooted in the country’s history of sorrow, courage, and resistance. This is not so different from the very first Christmas. Then, Judea was under occupation and the emperor’s myrmidon, Herod, was a terrorist and mass murderer, hunting innocent children to secure his own throne. Baby Jesus, Mary, and Joseph had to escape to Egypt in the middle of the night and stay there for several years as refugees. As C. S. Lewis put it, our whole world is enemy-occupied territory and Christmas is the story of the rightful king, who landed in the disguise of a child to invite us to participate in a great campaign of sabotage.

The war between Ukraine and Russia is also a war for the freedom of Christmas culture. Christmas, especially during wartime, can make the impossible happen. Enemies on both front lines can reconcile for a short time, and although examples of military Christmas reconciliations might be rare, the fact they have happened gives us hope and the chance to imagine peace. They encourage us to be optimistic that these one-time military truces might have a lasting effect after the war, but only if those modern-day Herods—Hitler, Stalin, Putin—disappear for good.

Christmas is a time that reminds us that justice and love prevail, even when it seems that both are slowly dying. It ensures the indestructibility of hope in times of the greatest hopelessness. For as long as we celebrate Christmas, we can neither be defeated nor destroyed. This is the message that Ukraine is trying to convey to the world.

Adapted from A Ukrainian Christmas, published in 2022 by Sphere. Translated and abridged from The Great Christmas Book, published in Ukraine in 2020 by Portal Books.

‘Carol of the Bells’ Is More Than a Christmas Favorite. It’s a Ukrainian Cry of Independence.

‘Carol of the Bells’ Is More Than a Christmas ...