In November, officials in the United Arab Emirates (UAE) made a surprise announcement. Discovered among the white-hot sand dunes of Siniyah Island were the ruins of a 1,400-year-old Christian monastery, likely predating the rise of Islam.

Historians say that as Islam grew in influence in the seventh century, conversions to the new religion created what became the Arabian Peninsula of today. Tracing their lineage back centuries, Saudis, Emiratis, Qataris, Bahrainis, Omanis, and Yemenis today uniformly follow the creed of Muhammad.

The ancient monastery, however novel, is a relic of the past.

But what may be more surprising to many is that the modern Gulf is a mosaic of the present. Thriving Christian communities exist among the millions of migrant workers in the region. Church buildings are bursting at the seams, overflowing into rented hotels and movie theaters. Pope Francis has even visited—twice, including last month.

What explains this under-appreciated dynamic, in a region commonly understood to be a bastion of persecution? And in contrast, as Gulf nations tout their “tolerance,” what does it mean in reality?

The Arabian—or Persian—Gulf, located in western Asia between Iran and Saudi Arabia, is an extension of the Indian Ocean. Most of its neighboring peoples are Arabs, with Arabic as their official language, though dialects distinguish one region from another.

The nomenclature is controversial. Iran, the most-populous country adjacent to these waters with over 85 million citizens, has throughout its history designated the region as the Persian Gulf. Modern scholarship and historical records agree, going back at least 2,500 years to the time of the powerful Pars Empire.

But the nationalism of most of the Arab countries challenges the Iranian position and insists on designating it the Arabian Gulf. The 1958 coup of Abdulkarim Ghasem in Iraq, followed by anti-Iranian feelings in the region after Iran and Egypt ceased all diplomatic relations in 1960, led to a general Arab acceptance of Arabian Gulf over the alternate usage.

Six of the seven countries on the peninsula—variously structured as kingdoms, emirates, sultanates, or states—formed the Gulf Cooperation Council (GCC) in Abu Dhabi, UAE, in 1981. The aim of the GCC is to foster peace and security in the region and to develop economic relations among the member countries. 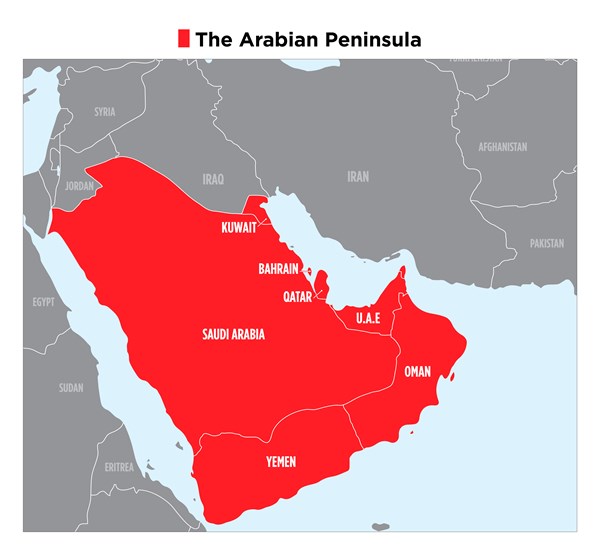 Alongside archaeological evidence, Syriac sources of the Church of the East, also known as the Nestorian Church, show that even after Muhammad conquered Mecca in 629, churches remained active in the region until disappearing in the late ninth century.

In his analysis of local missionary ministry, Evangelism in the Region of the Arabian Gulf, Kuwaiti author Abdul Malik Al Tamimi asserts that the preaching of the gospel bore no fruit since no indigenous Christian community emerged. Still, a foundation for the future was laid since thousands of travelers, businessmen, and migrants from the Middle East and other places arrived in the Gulf and some of them established churches. But the fact remains that conversions among locals are not documented.

There is no single good explanation for this, wrote RCA missionary Lewis Scudder in The Arabian Mission’s Story. But he proposes that the missionaries’ success is evident in the remarkable acceptance that local populations afforded their service institutions, impacted by their Christian philanthropy and devotion.

Presently, the church in the Gulf is mainly expatriate. The region is rich in natural resources and has attracted many nationalities and ethnic groups, seeking employment and business opportunities. Nearly all Christian traditions exist in the Gulf, but the Catholic Church constitutes the biggest community.

Seventeen Gulf cities provide government land for more than 40 church buildings. Even though churches cannot own land, they have a certain degree of assurance from local authorities that the government will not take these properties back.

This privilege, however, is not extended to all denominations, which means that different ecclesial traditions share the same space. This “forced ecumenism” produces some wonderful examples of cooperation—and sometimes rivalry—as congregants learn to live together with a shared voice toward government officials, seeking a fruitful ministry among migrant workers.

But if foreign believers possess a general freedom of religion, local expressions are largely curtailed. Present laws in the Gulf do not allow the proselytization of Muslims. And although most Christian-background communities hold their worship services inside walled compounds, these are the only locations where scriptures and biblical literature may be distributed.

Bishop Paul Hinder, the papal envoy to the Arabian Peninsula, put it this way prior to Pope Francis’ November visit: “Religious liberty inside Bahrain is perhaps the best in the Arab world. Even if everything isn’t ideal, there can be conversions [to Christianity], which aren’t at least officially punished like in other countries.”

Indeed, the degree of freedom in the Arabian Gulf varies, led by Bahrain and followed by Kuwait, UAE, Oman, and Qatar. For example, the Al Amana Center in Oman, an ecumenical and interfaith organization, has a long legacy of Christians working with their Muslim hosts and neighbors from different faiths. The Ministry of Tolerance and Coexistence, established in the UAE in 2016, spreads these values among the different communities in the emirates. And that same year, the Bible Society in the Gulf (BSG) began participating in the prestigious Bahrain Book Fair, the only Christian entity among the 380 participating publishers.

“Our Muslim communities need organizations like you to help them know and understand the Christian faith and learn how to coexist with each other,” said one visitor to the BSG booth. “Your presence here shows the significance of living in harmony with different faiths and to understand each other more.”

Similarly, the degree of restrictions imposed upon the Christian presence is different in each country. Saudi Arabia, for example, prohibits Christian communities from building churches, even occasionally cracking down on private worship spaces. Recent socio-economic and political reforms in the kingdom, however, lead many to hope that such restrictions may soon be reviewed and eased.

The question is how.

I have been working in the Arabian Gulf for more than three decades. When I was appointed as BSG general secretary in 1990, following ten years of service in Beirut, my Lebanese mentor gave me essential perspective.

“You will be moving to a region which is very different than Lebanon, where Christians do not enjoy the freedom we have here,” he said. “You need a different strategy, especially for Bible work.”

Following his advice, we exercised care and caution, focusing on developing good relationships with the authorities. We began by importing only a couple hundred Bibles at a time—and always through legal channels.

Last year, the Bible Society distributed over 55,000 scriptures through 12 centers in five countries of the Arabian Peninsula.

Bill Schwartz, former archdeacon of the Anglican Diocese of Cyprus and the Gulf, believes the Christian presence in the Gulf is winning respect for Christianity by contributing to Gulf society at large. In both formal and informal interfaith dialogue, expatriate communities maintain good relations with Muslims in schools, universities, hospitals, and the workplace—and even in the home, as millions of domestic workers care for families and children.

As Christian ministry leaders, the investment of time and energy in building relationships—however bumpy along the way—has been worth it. Full freedom can be achieved only through trust, confidence, and mutual respect.

Until then, tolerance—with all its limitations—is the right word to describe the state of Christianity in the Gulf. Broad labels like persecution are not only counterproductive but fail to describe the reality of millions of Christian migrant workers—or the relationships they have with their government hosts. In nurturing these, improvements in religious freedom will come.

Then the Arabic greeting of familial welcome in the Gulf—Hayyakum Allah—will be the true description, with hospitality and friendship cherished as cultural norms throughout the region.

Hrayr Jebejian is general secretary of the Bible Society in the Gulf.

Why ‘Persecuted’ Is Not the Best Way to Describe ...