February 21, 2019, was a typical cold winter day in Chicago. I got home from work around 6:30 p.m. and felt ready for a break after a long day of doing social work at the hospital. I took the dog out for a short walk, came back home, turned on the TV, and started changing out of my work clothes. Then I heard an excruciating noise—what sounded like a vehicle crashing into my building.

I was standing naked in my living room when police officers with guns, scopes, and lights broke down the door, rushed in, and started yelling at me to put my hands up. All I could think was, Please do not shoot me, please do not kill me.

I spent the next 40 minutes in a state of horror—crying, begging, pleading with them to let me put on my clothes. With tears streaming down my face, I cried out over 40 times: “You have the wrong place.”

As a single woman living alone, I often prayed about safety both inside and outside my home. Asking for protection was a regular part of my prayer time with God. So after the police departed that night, I found myself asking the question people often do after a traumatic experience: Where was God? How could he allow this to happen to me?

I spent the next 13 months in legal battles with the city, all the while struggling with my mental health and questioning my faith. I was going to church every Sunday and serving in my same capacity, but during quiet times, I continued to question God.

When the death of Breonna Taylor made national news, the story shook me to my core because of its similarities with mine. Police officers had raided the home of an innocent Black woman. But in that case, they’d shot and killed her.

As I grieved for Taylor, my prayers shifted from “Why did you allow this to happen to me?” to “Thank you for protecting my life.”

The idea of thanking God for that night was not a new concept to me. The morning after the police raid, I had called my pastor, Charlie Dates, on the phone. He said to me, “Anjanette, take comfort in knowing that God was with you and preserved your life.” I knew what he meant. But it took well over a year before I was able to even think about gratitude to God.

By now, I’m almost three years out from these events. I went through months and years of legal struggles, months and years of fighting against corrupt city policies. I made the tormented decision to release police bodycam footage of that night, which four months later led to a Twitter hashtag, a profile, and a national news story. 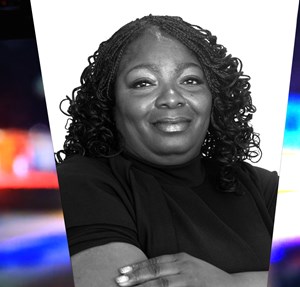 After all that, I’m focusing on the healing process. I read my Bible and I pray often. I go to therapy and I go to church. My pastor often tells me I need to find a way to forgive everyone involved. My therapist often tells me I need to get to a place of acceptance. I am far from both and still struggling with anger and hurt. And yet: I have greater clarity about who am I and where I sit in God’s greater story.

A few months ago, a pastor from Louisville, Kentucky, guest preached at our church. At the end of the sermon, he said something that struck me as powerful: “Do you know who you are?”

I’ve reflected often on that question, especially as I think about my experience of being traumatized, humiliated, and ignored by a Chicago Police Department raid team. During my legal battles with the city, I listened to friends describe me as strong and courageous. But all I could see was my pain and weakness. All I could think about were my many nights of silent tears.

I’ve spent a great deal of time with my therapist, unpacking the reasons why I “hide in the shadows of unworthiness,” to use her words. But today, after so much time in therapy and so much time with God, I can say with confidence that I am a 52-year-old African American woman, a descendant of slaves, a follower of Christ, a social worker extraordinaire, a fighter for justice, a mother of one, and a friend and family member to many.

I have been shaped and molded by the red-clay dirt of the Mississippi Delta and by God’s spiritual breath of life, which guides my moral compass. That is who I am.

As I continue to reflect and seek God for healing, I am learning that my calls for help were silenced well before I even came into the world. I was born into an ancestry of slavery. The cries of my people were ignored.

So it’s no wonder that I, Anjanette Young—the person who proudly owns my Southern heritage and my place in the family of God, the little country girl from Mississippi whose grandmother introduced her to Jesus—was used and trusted by the Lord on February 21, 2019, to lead such a tremendous battle against an unjust system.

Therein lies the answer to the question “Why me, God?” Why did I have this experience of being humiliated by the 12 men who stood in front of my naked body? Because my silent tears are a part of a larger plan—one that will have a loud, thunderous outcome.

Who is Anjanette Young? She is a woman of God who has learned to see all of life’s experiences through a spiritual lens, knowing that all things work together for the good of those who love God and are called according to his purpose.

Anjanette Young lives in Chicago and serves at Progressive Baptist Church as the leader of its hospitality ministry. She speaks to social work students about how to fight for justice.