Devastated in the Havana hotel explosion, the historic Calvary Baptist Church—like many other congregations across the island—will face a drawn-out battle with the government to restore its building.
Anna-Lee Stangl|May 26, 2022
español
Image: Ramon Espinosa / AP Images
A member of the Cuban Red Cross takes pictures inside Calvary Baptist Church, damaged by an explosion that devastated Havana's Hotel Saratoga in Old Havana, Cuba, on May 6, 2022.

On May 6, an explosion rocked a heavily transited corner of La Habana Vieja (Old Havana). The almost century-old Hotel Saratoga, set to reopen the following week after extensive renovations, was left in ruins.

Media coverage centered on the iconic hotel, and images of the massive damage to the building and to the buses and other vehicles on the street in front of it circulated around the world. A week later, the final number of those killed by the explosion, including children, elderly people, and a pregnant woman, had reached 45, with more than 100 people hospitalized because of injury. Officials put the blame on the accidental ignition of liquid gas.

Government officials and state media coverage focused heavily on the hotel, which is owned by a tourism company belonging to the Cuban military, but also mentioned damage to surrounding buildings, including a school and some apartment buildings.

Absent from all state media coverage has been any mention of the catastrophic damage to Calvary Baptist Church, which shares a wall with Hotel Saratoga, or the total destruction of the home of an elderly retired couple, both Baptist leaders, which was sandwiched between the church and the hotel.

Calvary Baptist Church is one of the most historically important religious buildings on the island. The church, established in the late 1870s on the site of a former circus, was the first Baptist church in what would later become the Baptist Convention of Western Cuba. In addition to the sanctuary, church buildings house administrative offices for the denomination.

At the time of the explosion, 18 people, including three young children, were inside the church facilities. Miraculously, despite the collapse of the dome of the sanctuary and some of the administrative buildings, no one was hurt. Survivors managed to find one another and help each other climb out of the building to safety. The elderly couple were out of the house when the explosion took place.

Jorge Luis Iriarte, who works as a cook at Calvary Baptist Church and was there with his son during the explosion, shared his belief that a miracle had occurred, noting that the lives of many of church workers and children were saved because, for various reasons, at the time of the explosion they happened not to be where they were supposed to be.

“Once outside we really saw what had happened,” he said in a written statement. “The hotel lost almost three floors and the side that adjoins the church collapsed, destroying everything in its path, [including] the bathroom, … the pastor’s house, the side classrooms, offices and the roof of the sanctuary.” 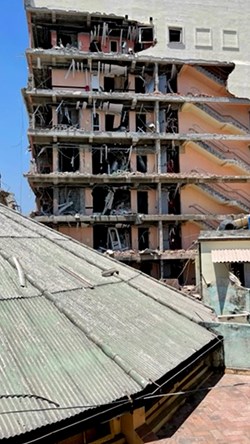 Hotel Saratoga in Old Havana, Cuba, after the explosion on May 6, 2022.

There are many questions about what will happen next. The Cuban government controls gas utilities, and the military owns the hotel, where the explosion occurred. These facts would suggest that the government should assume responsibility for all of the damages incurred and make restitution to those affected. That, however, seems highly unlikely to happen.

The government has said that the future of the Hotel Saratoga building is under consideration. As the property belongs to the Cuban military and is located on some of the most sought-after real estate on the island, it seems probable that the government, in partnership with private companies, will invest to ensure that it continues to serve tourists and bring in income in one form or another. Tourism is one of the main income streams for the Cuban military and government, and it would be surprising if they let the hotel go, despite how expensive it will likely be to rebuild.

The future of the church is more complicated.

The government has a long history of making it very difficult for religious groups to repair their buildings—even when they have managed to obtain building materials despite chronic shortages on the island—by denying or failing to respond to requests for required permits.

Calvary Baptist Church also sits at the center of Cuba’s lucrative tourism industry, on Old Havana prime real estate. Residents in the area report being approached by self-identified businessmen who have offered to buy them out of their homes.

And although the Baptist Convention of Western Cuba is a historic, legally registered religious association, it is not part of the government-supported Cuban Council of Churches. Its leadership has, in recent years, been targeted by the government because of its involvement in interdenominational unity initiatives and public criticism of government policies.

In order to rebuild, Calvary Baptist Church and the entire denomination will face an uphill battle. Based on previous experience, they can expect a lack of support, if not active obstruction, from the government.

Rebuilding and restoring the historic church and denominational headquarters will be prohibitively expensive, and will require materials that are difficult, if not impossible, to find on the island. Even if foreign groups attempt to help by donating financially and materially, they will still need permits to allow funds and goods onto the island. If they succeed in that, they will then need additional permits from the government for the work itself.

Every step will rest on support and cooperation from the government.

Cuban Christians have expressed concern to CSW (formerly Christian Solidarity Worldwide), pointing out that the government may see an opportunity to kill two birds with one stone. By simply failing to grant permits, or dragging out the process to the point that restoration of the historic buildings is no longer viable, the government has the power to force a religious group it views as a thorn in its side to surrender a site of deep historic and symbolic importance to Cuban Protestants. It could then potentially take it over and convert it into yet another money-making enterprise for the military via the tourist industry. 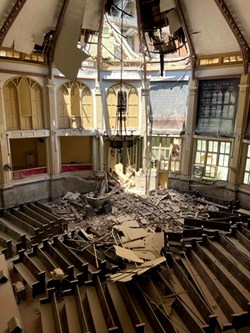 Calvary Baptist Church after the explosion.

“The building is considered [part of Cuba’s] national heritage, with a possibly English design. This means that any modifications must be approved by the government, and the exterior façade must be maintained. It will have to be transformed and the interior made more modern,” a legal expert based in Havana, who asked to be kept anonymous, told CSW. “However you look at it, it will be extremely expensive. [The government] helps with the restoration of buildings in Old Havana considered to be part of the national heritage, but they do not help the churches. They have to do it with their own resources via donations.”

The Office of Religious Affairs (ORA) of the Central Committee of the Cuban Communist Party is responsible for approving permits for religious groups for anything ranging from a simple repair on a roof or the installation of toilets to the remodeling of existing buildings. The ORA has long used the issuing of permits as leverage, in many cases rewarding groups deemed as sympathetic to the government with permits while denying permits, or simply failing to respond to requests, to religious groups deemed unsupportive or hostile.

For example, in 2010, after the leadership of Trinity Baptist Church in Santa Clara (also part of the Baptist Convention of Western Cuba), refused to ban the family members of political prisoners from attending the historic church, the government froze the church’s bank account, preventing it from accessing aid that had been donated from abroad to make critical repairs to the church roof.

In another example, El Cristo Baptist Church, originally built in 1901, which belongs to the Baptist Convention of Eastern Cuba (also registered but not part of the Cuban Council of Churches), waited 20 years for a response to a 1996 request to make vital repairs to the church roof. In the interim, the building was infested by bats and became so hazardous that in 2005 the Ministry of Health shut it down. The members of the church were forced to meet in a makeshift structure built onto the side of the church; the structure was unpermitted and so technically illegal. Only in 2016, after a hurricane devastated the area, did the government issue permits for the church to make repairs, like other buildings in the area, and allow it to receive donations from abroad to rebuild. Sadly, the long-term pastor of the church who fought for over a decade to repair the church died before its restoration.

There are hundreds of similar stories. In the case of Calvary Baptist Church, its unique location on highly valuable real estate of significant potential financial interest to the military itself makes the denomination’s prospects of fair treatment even more uncertain.

The legal expert expressed hope that the denomination will stand its ground.

“We should insist on not losing the location—the place itself is what is most valuable financially. The church should not give up the location or trade it for another. [The government] wants to convert the entire area into hotels. They’ll wait for it to fall down so that [the denomination] has to leave and they can begin putting a hotel there.”

Monitoring and advocacy in and outside of Cuba will be vital. It is highly unlikely that the Cuban government will accept responsibility for the destruction wrought by the explosion and indemnify those affected (except its own). Those who care about freedom of religion or belief in Cuba cannot remain on the sidelines. As the Baptist Convention of Western Cuba is able to secure funding and materials from counterparts and supporters abroad, our help will be needed to closely monitor the process. We must pressure the government to ensure that the authorities issue permits swiftly to allow for the urgent and expansive repairs and restoration work needed to ensure that Calvary Baptist Church continues to serve Christians in Cuba, from its strategic location, for decades to come.

In the meantime, some of those directly affected by the explosion still find reasons to give thanks. The elderly pastor whose home was destroyed in the explosion told CSW, “For two Sundays in a row, the government has allowed Calvary Baptist Church to meet [for religious services] in public places, something which, for more than 60 years, we were unable to do. God is in control.”