Do you know the history of the Christian flag? I have seen it for years and pledged allegiance to it, but I do not know its history.

The Christian flag dates back to an impromptu speech given by Charles C. Overton, a Sunday school superintendent in New York, on September 26, 1897. The guest speaker for the Sunday school kick-off didn't show up, so Overton had to wing it. Spying an American flag near the podium, he started talking about flags and their symbolism. Along the way he proposed that Christians should have their own flag—an idea that stayed on his mind long after the speech. In 1907 Overton teamed up with Ralph Diffendorfer, secretary to the Methodist Young People's Missionary Movement, to produce and promote the flag.

The colors on the flag, not surprisingly, match those on the American flag. White represents purity and peace, blue indicates fidelity, and red stands for Christ's blood sacrifice.

The first pledge to the Christian flag was written by Methodist pastor Lynn Harold Hough, who heard Diffendorfer's flag presentation at a rally. Hough, a liberal, wrote a fairly broad pledge: "I pledge allegiance to my flag and the Savior for whose kingdom it stands; one brotherhood uniting all mankind in service and love." Conservative churches generally use a more detailed version: "I pledge allegiance to the Christian flag, and to the Savior for whose kingdom it stands; one Savior, crucified, risen, and coming again with life and liberty to all who believe."The pledge isn't the only aspect of the Christian flag that has caused controversy over the years. Churches have struggled with the flag's placement in relation to the American flag, its implied link between faith and patriotism, and whether flags belong in a sanctuary at all. 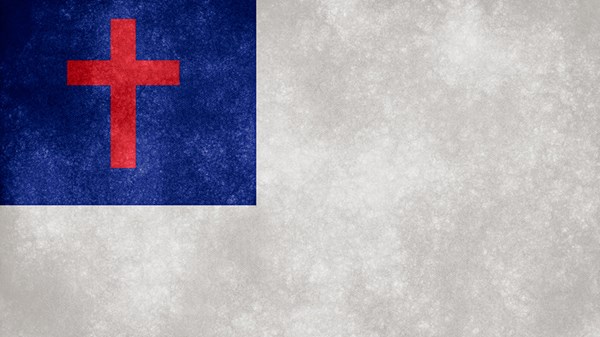