Was the phrase "he descended into hell" always part of the Apostles' Creed, or was it introduced later? And how have Christians interpreted it over time?

Was the phrase "he descended into hell" always part of the Apostles' Creed, or was it introduced later? And how have Christians interpreted it over time? 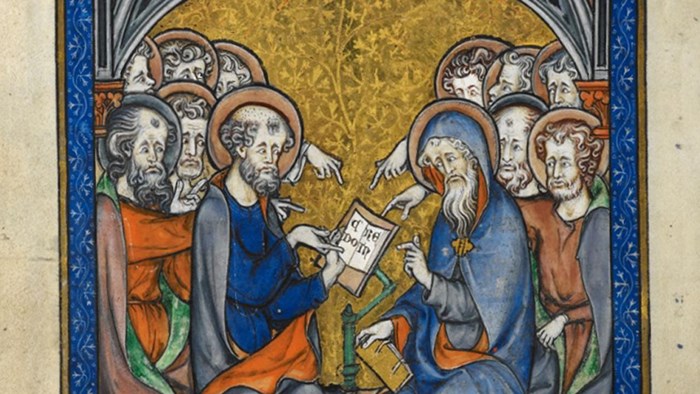 Jesus' purported descent into hell has long been the subject of disagreement between Christians. Its presence in the Apostles' Creed points to a long-standing, lively, and ultimately inconclusive discussion on the theme of Jesus' post-crucifixion activities.

Christians first recited the Creed not as a statement of belief, but as a baptismal confession. Much as liturgical churches now pose questions in confirmation ceremonies, the ancient churches asked candidates for baptism three questions about the Trinity. From this came the Apostles' "Symbol" —or "sign" identifying with the community in baptism—and eventually the Creed in its current wording.

The Creed, then, was not set from its beginning, but fluid. The oldest extant version comes from Bishop Marcellus of Ancyra (ca. A.D. 337), and it does not contain the clause about descending into hell. Scholars call this version "The Old Roman Form"—the earliest creed of the Roman church.

Apparently the clause first appeared in the East with Sirmium's fourth formula in 359—also called the "Dated Creed"— though the Eastern church rejected it as tinged with Arianism. The first mention of the descent in the West occurs in the writings of Rufinus of Aquileia, who included it in his baptismal creed around 400. Over time, the Latin church appropriated it as well, officially integrating it into the Creed in 750.

Christians have long been troubled over what the descent actually means. Augustine, for example, believed Christ literally descended into hell. But in his letter to Evodius, he admits several uncertainties over the meaning of 1 Peter 3:19, which says that Jesus preached to those "spirits ...

Was the phrase "he descended into hell" always ...