The Face of Christmas Past

The Face of Christmas Past

Unlike our modern Santa Claus, Father Christmas was traditionally a personification of the holiday who emphasized generosity to others, thanksgiving to God, and celebration of the Savior.
Anthony McRoy 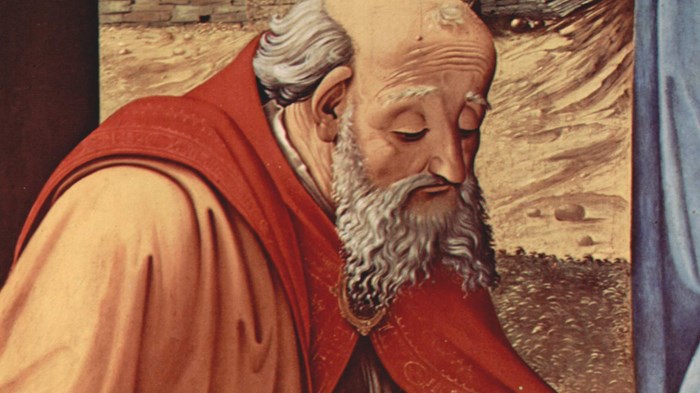 While the modern "Santa Claus" is essentially American, one U.S. tradition never took off in Britain—designating him "Kriss Kringle." Instead, Britons call him "Father Christmas." Father Christmas did not merge with Santa until around the 1870s. He was not a jolly, rotund elf, nor was he associated with presents or even children. People viewed him not as actually existing (like St. Nicholas) but rather as the personification of the season (like "Father Time"). That did not spare him the wrath of the Puritans.

"Santa" in a doublet and garters?

The earliest reference to a personified Christmas figure was the 15th-century carol "I Am Here, Sir Christëmas.” The carol's theme is not the figure himself (who is merely "welcomed"), but rather the carolers' joy that a "maid" (i.e. virgin) has borne the Christ-child. It climaxes by urging all to "Make good cheer and be right merry/And sing with us now joyfully, Nowell."

He reappeared in 1616 when the play Christmas, His Masque by Benjamin Jonson was performed at the Royal Court. In this play, the figure is called "Old Christmas" and "Captaine Christmas" and is not dressed in red or green fur and hood: "He is attir'd in round Hose, long Stockings, a close Doublet, a high crownd Hat with a Broach, a long thin beard, a Truncheon, little Ruffes, white Shoes, his Scarffes, and Garters tyed crosse." He emphasizes that he is a good Protestant, decrying claims of "Popery"!

Another masque, The springs glorie (written by Thomas Nabbes in 1638), set in "the Mansion of Christmasse" during snow-covered winter, presents "Christmasse" ...

Subscribe to CT and get one year free
Christmas
December 22, 2009

The Face of Christmas Past
Hide This