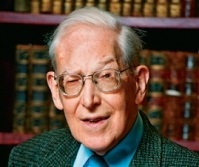 History lovers have to appreciate a book that charts the evangelical future by looking back on the life and legacy of a great theologian. Of course, such a strategy of turning back to find your way forward perfectly suits J. I. Packer. As an accomplished historian and theologian, Packer finds cures for what ails contemporary evangelicalism by exploring the contributions of spiritual giants such as the Puritans. So we expect nothing less than prescriptive retrospective from J. I. Packer and the Evangelical Future: The Impact of His Life and Thought, a new book edited by Timothy George.

The book mostly compiles essays from a 2006 conference hosted by Beeson Divinity School. Presenters included Charles Colson, Mark Dever, Alister McGrath, Carl Trueman, and the CH blog's own David Neff. Not surprisingly, several of the essays touch on Packer's contributions to the doctrine of Scripture.

"This insistence on the Bible as the irreplaceable source for all adult catechesis in academic and church settings is arguably Packer's most important legacy to the future of evangelicalism," writes Paul House, Beeson's associate dean. "Without this emphasis Packer's catechesis makes little sense and will have little continuing impact, and the same is also true for evangelicalism."

In particular, Packer has contended for more than 50 years that evangelicals should hold to the belief that Scripture is infallible and inerrant. Denver Seminary associate dean Donald Payne writes, "It is difficult to overstate the importance of biblical inerrancy in Packer's theological method. According to this logic, obedient discipleship is possible only if Scripture functions inerrantly."

Packer elaborates on the biblical teaching, historical basis, and practical importance of inerrancy in his 1958 classic, 'Fundamentalism' and the Word of God. Countering liberal opponents of evangelicalism, Packer dispels several myths about inerrancy. Evangelicals do not believe that God merely dictated the words of Scripture to writers without regard for their personality. Rather, God prepared these writers for their work, guiding them according to the gifts he had granted them. Packer also cautions that inerrancy does not apply to our interpretations of Scripture. We separate issues of authority from matters of hermeneutics. In order to understanding the meaning of Scripture, we plead for help from the Holy Spirit and deploy the tools of exegesis.

Critics of inerrancy often observe that the doctrine is not taught by Scripture itself. Packer responds by citing Jesus' words from John 10:35 ("Scripture cannot be broken"), Luke 16:17, and Matthew 5:18. These last two passages indicate God's concern for accuracy in even the smallest aspects of the Law. The Bible's infallibility and inerrancy correspond to the meticulous, reliable character of the God who inspired the Word.

These terms that Packer regarded as so valuable in 1958 as he contended with liberal critics remain useful today as some scholars attempt to separate God from his Word. Writing during a high point of neo-orthodox theology, Packer once warned that trying to separate the Bible from the Word of God will "lapse into an arbitrary subjectivism." Instead, Packer observed an overarching unity in Scripture, a "single utterance of which God is the author." As we have witnessed over the lifetime of this faithful minister, trust in the God who inspired his Word without error contributes to a lifestyle of faithful scholarship and service.