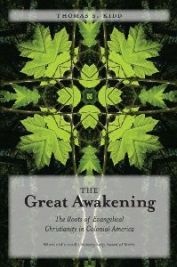 Good history books are a gift that keeps on giving. Baylor University scholar Thomas Kidd published The Great Awakening: The Roots of Evangelical Christianity in Colonial America in 2007. But this landmark contribution to a much-studied period will long shape our understanding of the dynamic revival that spawned the modern evangelical movement.

Regarding that thorny question of evangelical origins, Kidd does not go so far as his colleague David Bebbington, who has argued for a "sharp discontinuity" between the transatlantic revival and earlier Protestant expressions. Rather, Kidd describes the American evangelical tradition as a "new elaboration" of the Reformation." In fact, he identifies three "chief tributaries" that fed into the burgeoning movement: Continental Pietism, Scots-Irish Presbyterianism, and Anglo-American Puritanism. But the "new elaboration" concerns "dramatically increased emphases on seasons of revival, or outpourings of the Holy Spirit, and on converted sinners experiencing God's love personally." This elaboration led to no small controversy in the 1740s.

But Kidd argues that the Old Light/New Light dichotomy oversimplifies what were actually fluid responses to the awakening. In place of this dualistic framework, Kidd suggests a three-part division. As a result, Kidd's narrative elevates radical evangelicals who overturned social conventions. They worried moderate evangelicals who defended the revivals and incurred the wrath of anti-revivalists who justified their opposition by citing radical enthusiasm.

While many historians have been occupied by the debates between Charles Chauncy, an Old Light, and Jonathan Edwards, a New Light, Kidd's attention to the radicals reveals their significant contributions in shaping American evangelicalism. They did not consider education necessary for ministry. Women and racial minorities sometimes served as church deacons and elders. They welcomed unusual manifestations of the Spirit. They leveled the lingering distinctions between ordained ministers and laypeople by criticizing pastors and telling laypeople they could have full assurance of salvation here and now. Kidd's argument about the radical influence brings him into conflict with Nathan Hatch'sThe Democratization of American Christianity, in which he argues that the American Revolution unleashed the populism that characterizes evangelicalism still today.

Though he acknowledges the work of W. R. Ward and Mark Noll in linking the American awakening with events in continental Europe and Great Britain, Kidd focuses on the colonial radicals and moderates. As he tells this story, Kidd declines to offer either a wholly supernatural or entirely natural explanation of the awakening. Radicals and moderates alike understood the awakening as a special outpouring of the Holy Spirit. But looking back with an analytical eye, Kidd notices that the constant threat of war with powerful France and Spain between 1688 and 1763 scared colonists who hoped the display of godliness in the revivals would lead God to show mercy and save them from Catholic threats. Kidd also notes the role of new media in spreading news of awakenings in nearby and distant towns. New periodicals such as Thomas Prince's The Christian History stoked interest among Christians in seeing this dynamic movement spread to their hometowns.

As he rebuts Jon Butler's argument that the Great Awakening was an "interpretive fiction," Kidd acknowledges that many historians have perpetuated falsehoods about the revival. Kidd essentially agrees with Butler that the awakening did not lead directly to the Revolution, though he acknowledges that many evangelicals enthusiastically advocated breaking with Great Britain. And he rejects any sharp break between the First Great Awakening, peaking between 1740 and 1743, and the Second Great Awakening, which started in 1800. Actually, revivals predated even the surprising work described by Edwards in 1734-35, and they continued until the Revolution concluded in 1783.

"There was, really, no Second Great Awakening, but rather a long-term turn toward Baptist and Methodist piety from the American Revolution to the Civil War, punctuated by new revivals like the one at Cane Ridge, Kentucky, in 1801," Kidd writes.

Kidd's book may overwhelm some readers who aren't already familiar with the key figures of the First Great Awakening. But his sweeping, fast-paced tour through the period has already become a must-read for anyone who wants to uncover the roots of American evangelicalism.