From religious liberty to religious violence, it helps to get our facts straight.
Thomas S. Kidd

Is America a “Christian nation”? When we worry about the direction our nation is heading, or celebrate when we see as a positive religious turn in American culture or politics, we are making assumptions about our own religious background as a country. Most of these assumptions are based on civics classes we took in primary and secondary school. While our assumptions claim a historical basis, there are a number of misunderstandings, some subtle and some overt, that Americans often have about their religious history. Here are five of the most common:

1. Religion had little to do with the American Revolution.

The American national Congress during the Revolutionary War was ostensibly secular, but it sometimes issued proclamations for prayer, fasting, and thanksgiving that employed detailed theological language. Whereas the Declaration of Independence had used generic theistic language about the creator and “nature’s God,” a 1777 thanksgiving proclamation recommended that Americans confess their sins and pray that God “through the merits of Jesus Christ” would forgive them. They further enjoined Americans to pray for the “enlargement of that kingdom which consisteth ‘in righteousness, peace and joy in the Holy Ghost’ [Romans 14:17].”

Some have argued that the Declaration of Independence illustrates the “secular character of the Revolution.” The Declaration was specific about the action of God in creation, however. A theistic basis for the equality of humankind was broadly shared by Americans in 1776. Thomas Jefferson did not let his skepticism about Christian doctrine preclude the use of a theistic argument to persuade Americans. Jefferson was hardly an ... 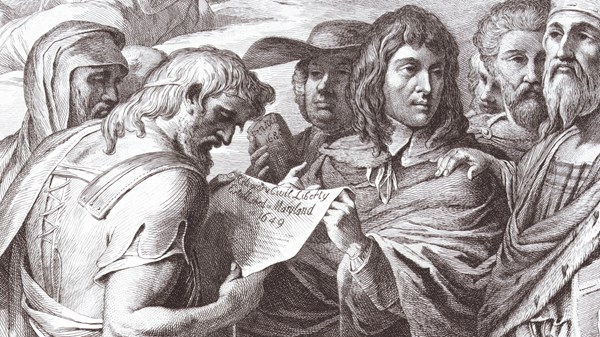