“The Poet of the Evangelical Revival,” Charles Wesley composed around 6500 hymns and has been called “The Father of Methodist Hymnody” and “the greatest hymn writer of all ages.” At first the Methodist hymns appeared in print under both John’s and Charles’ names, but it is generally agreed that John’s contribution was in translating hymns from other languages into English; Charles was the composer of original hymns.

What Charles provided was a plain and simple hymnody to complement his brother’s plain and simple preaching. Song from the beginning was a major part of the Methodist program. Charles’ production of hymns is like his brother’s endurance in preaching. Although few people read John’s sermons today, much less use them in devotional exercises, many people still sing Charles’ hymns, which are a part of nearly every Protestant hymnal.

Charles was vastly more popular than the great hymn writer of the previous age—Isaac Watts (1674–1748). A sign of his love of music is his sons’ and grandson’s professional involvement in the music world.

Among the familiar hymns of Charles Wesley are:

“Jesus, Lover of My Soul”

“O for a Thousand Tongues to Sing”

“And Can It Be That I Should Gain?”

To many of his sophisticated contemporaries, the hymns of Charles Wesley were controversial. Today, his hymns are among the classics of hymnody.

Next Article
John Wesley: Did You Know? 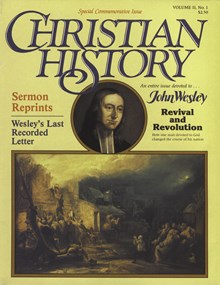 This article is from Issue 2 of the Christian History archive.