The Booths, their children, and The Salvation Army have all received extensive study, so only a small portion of available works can be listed here. Works are listed alphabetically by title within each category. Asterisks denote those available through The Salvation Army (see addresses below).

The Booths soon after their 1855 marriage.

* Bread for My Neighbour: The Social Influence of William Booth by Frederick Coutts (London: Hodder and Stoughton, 1978).

* Purity of Heart by William Booth (London: The Salvation Army, 1902).

* William & Catherine with Love] excerpts from their correspondence] by B. McCaughey (Toronto: The Salvation Army, 1989).

About the Salvation Army 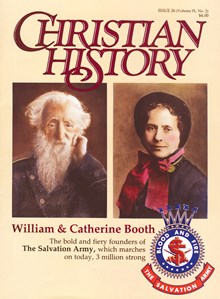