The Roman prefect interrogated Justin Martyr and his associates: “What sort of life do you lead? What are your doctrines? You admit that you are a Christian?”

To each question, the Christian philosopher made a direct reply.

Then the prefect, Rusticus, demanded: “Where do you meet?”

“Wherever it is each one’s preference or opportunity,” said Justin. “In any case, do you suppose we can all meet in the same place?”

Rusticus pressed him, no doubt for information that might compromise others: “Tell me, where do you meet? In what place?”

Justin said, “I have been living above the baths of [text corrupt] for the entire period of my sojourn at Rome … and I have known no other meeting place but here. Anyone who desired could come to my residence, and I would give to him the words of truth.”

At the close of this interrogation, Rusticus passed sentence on Justin and his companions, obtaining for Justin his appellation: Martyr.

The proceedings of Justin’s trial, just prior to A.D. 168, reveal some things about the location of early Christian worship and teaching.

In the Rome of Justin’s day, Christian meetings were still being conducted in private residences, in much the same way as over a century earlier, during the ministry of Paul. This is remarkable in light of Justin’s depiction of Christian worship, which included baptism, common prayers, preaching, and Communion. Though baptism played a prominent role in the Christian community, formal baptisteries were as yet undeveloped. Justin’s only comment is that the candidates “are brought by us where there is water.”

Justin’s defense before Rusticus also suggests that although the Christians in Rome were becoming fairly numerous, they did not abandon meeting in homes, even ...

ArtsBaptismCommunionFellowship and CommunityMartyrdomPrayerPreachingSacraments and OrdinancesWorship
Issue 37: Worship in the Early Church, 1993
Previous Article
Praying to the Dead

Mark Galli
Next Article
Prayers of the Earliest Christians 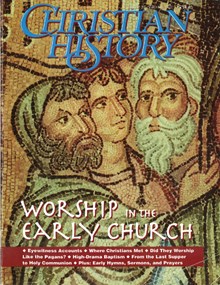