In February 1692, several young Salem girls, after they were caught practicing magic, claimed they had been afflicted by witches.

Their parents began searching for the witches, and hysteria mounted, especially as pastor Samuel Parris proclaimed, "In this very church, God knows how many Devils there are!" A public witch-hunt led to the arrest of 150 people; 19 were hanged for witchcraft, and one man was executed for refusing to testify.

Some twenty years before the Salem witch-hunt, a young woman living in the household of the minister of Groton, Massachusetts, began to "carry herself in a strange and unwonted manner." According to the minister, Samuel Willard, 16-year-old Elizabeth Knapp saw apparitions and experienced violent "fits" over a period of three months.

In the midst of one fit, she spoke in a "hollow" voice, and called the minister "a great black rogue" who "tell[s] the people a company of lies."

Willard answered back, "Satan, thou art a liar and a deceiver, and God will vindicate his own truth one day." Others in the room took up the confrontation, telling the Devil that "God had him in chains."

The answer came back, "For all my chain, I can knock thee in the head when I please."

Meanwhile, in her own voice Elizabeth told how the Devil had promised to make her a "witch" if she would sign a "compact" to become his servant.

The Difference of Salem

Events in Groton, and later in Salem, proceeded from the assumption that Satan lures certain people into compact with him, promising them, as he promised Elizabeth Knapp, that all "should be well"—they need not worry any longer about sin and salvation.

The people of Groton, however, also believed that, in the full course of God's providence, good would overcome evil. They witnessed the spiritual healing of Elizabeth as she, under the prompting of Willard, confessed that "the occasion of her fits" was "discontent" with her situation as a servant. She also said she was guilty of neglecting the means of grace. Though at times she accused an older woman in the town of causing her bewitchment, no wider witch-hunt erupted in Groton.

One minister, Deodat Lawson, hearing of the troubles in Salem Village, came there in late March of 1692. He witnessed 12-year-old Abigail Williams "hurried with violence to and fro in the room" and "sometimes making as if she would fly." Then the names began to flow: Good wife Nourse, Good wife Corey. … A judicial hearing quickly followed, with Abigail Williams and some nine others testifying that they had seen the "likeness" of these women praying to the Devil.

No one heeded Martha Corey when she remarked that her chorus of accusers were "poor, distracted children." Thus empowered, the accusers piled name onto name. Before the legal process was suspended in October 1692, nineteen persons had been executed.

What tensions rose to the surface in 1692 and resulted in this witch-hunt?

As the story of Elizabeth Knapp of Groton reveals, some tensions originated in the religious expectations of Puritanism.

One expectation was that believers fulfill, to the best of their ability, their moral duties. Another was that they examine their motives—in Puritan parlance, their "hearts"—to see whether they had sufficiently repented of sin and trusted entirely in the mercy of Christ. Puritanism intensely and regularly posed this question: Are you sincere?

Answering this question often resulted in self-doubt and uncertainty. One woman, Mary Toothaker, "had thoughts she was rather the worse for her baptism and had wished she had not been baptized because she had not improved it as she ought to have done."

Sometimes the uncertainty turned to anger, as when Elizabeth Knapp called Willard a "rogue." And sometimes the anger turned into blaming: Elizabeth, like the young women in Salem Village, blamed her inward confusion on an outside, alien figure, a witch or the Devil.

Puritans practiced the ritual of confession, and confession became crucial to witch-hunting. To confess was to make visible the hidden sin that lurked in everyone. This was a crucial step, and well accepted, in the process of salvation. When men and women joined the church in early New England, for instance, they were asked to confess their sins.

The magistrates and ministers who questioned the accused at Salem asked them to reveal their hidden allegiance to Satan. Because Puritans felt heavily the weight of their sin, and because confession was an integral part of their lives, we should not be surprised that some fifty men and women confessed to having joined with the Devil.

The Puritans believed that God had entered into a special relationship with godly people. This relationship obliged them to purge themselves of sins, personal and communal, that inevitably accumulated. The ministers and magistrates in New England believed witchhunting, and the public executions that concluded it, cleansed the community of evil.

Some ministers, notably Cotton Mather of Boston, reasoned that the Devil would become unusually active as the return of Christ neared. The presence of witches in New England was evidence of a vast "plot" masterminded by the Devil to overthrow the kingdom of Christ.

Because of the concern for the spiritual integrity of the community, confessing "witches" were asked to name confederates, adding fuel to the fire of accusations.

Belief in witches was not unique to the Puritans. A folklore much older than Puritanism embraced charms, fortune-telling, omens and apparitions, and village healers or "cunning people." The healers' vengeful counterparts, witches, could cause someone's chickens to sicken, cattle to run away, or children to become fatally ill.

Some Puritans turned to "cunning" people or to other folk practices. Not far away from Salem in the 1670s, a woman put a horseshoe over her front door to prevent a suspected witch from entering. When a church deacon saw the horseshoe, he tore it down. In the Salem trials, several of the men and women executed had reputations as healers and cunning folk.

Who were the heroes and villains of the witch-hunt? Much blame has fallen on the contentious minister in Salem Village, Samuel Parris; the magistrates who conducted the trials; and Cotton Mather, who defended the judges against the charge they victimized innocent people.

Yet Cotton Mather and his father, Increase, helped end the trials by criticizing certain judicial procedures. And Samuel Parris and the judges were simply acting according to widely held expectations of the time.

Witch-hunting, in fact, was not unique to Puritan America. It occurred in both Catholic and Protestant regions of Europe, and the toll it exacted in New England was much smaller than in Scotland or parts of France and Germany.

Why witch-hunting became deathly in some Puritan villages but not others will likely remain a mystery. Rather than assign blame, we should understand the tragedy at Salem as the outcome of forces larger than any single individual or group. 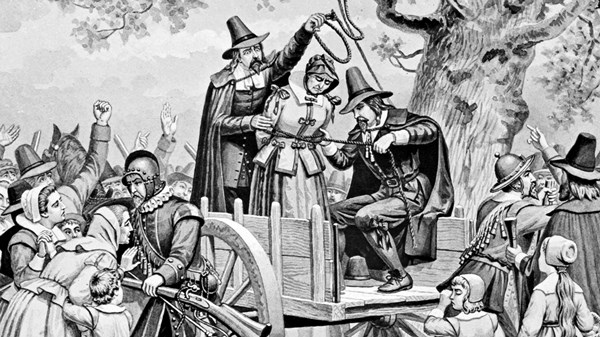