In this issue, we’ve looked at how Christianity influenced the Revolutionary War. Now we turn to the next question, How did the war influence the American church? And where do we see its impact still today? To help us think about these questions, Christian History spoke with Mark Noll, professor of history at Wheaton College (Illinois). He is the author of many books, including A History of Christianity in the United States and Canada (Eerdmans, 1992) and Christians in the American Revolution (Eerdmans, 1977).

Christian History: In the 1760s and 1770s, Christian faith infused the cause of independence with religious meaning and helped justify war with Britain. Did this religious atmosphere boost people’s devotion? For example, did more people start going to church after July 4, 1776?

Mark Noll: In general, the war hurt religious practice even though prominent patriot Christians lent moral and religious support for the war. Believers’ energy went toward the war effort, not toward building up the local church. In some areas, like New York, Boston, and some places in the South, arguments between loyalists and patriots split congregations.

Where fighting took place, of course, congregations were disrupted and some people killed. New Jersey, South Carolina, New York, and Philadelphia suffered most from warfare. (New England, surprisingly, did not; after the Battle of Bunker Hill, it was pretty much spared.)

One possible exception to religious decline was found on the frontier, in non-established churches. For example, Henry Alline, “the George Whitefield of Nova Scotia,” sparked a revival among colonists in that province who remained neutral in the war. But overall church membership probably declined throughout the 1770s and 1780s.

Which denominations were particularly hard hit?

The Anglican Church, which became the Protestant Episcopal Church, was devastated. On the eve of the Revolution, along with the Congregationalists and Presbyterians, it was one of the three most important denominations in America. It was the established church in New York City and several southern colonies. Because of its association with England, the new Episcopal Church struggled and survived only as a small, relatively insignificant denomination.

More surprisingly, the Congregationalists of New England suffered. In 1775 they were the largest denomination in North America, and given their support for the war, you would have thought they would have taken off.

That did not happen. Congregationalists, because of their Puritan roots, were more comfortable with social harmony and unity, and even insisted upon some degree of religious conformity. This did not suit them well in the new hurly-burly individualism of American life after the Revolution.

Which denominations did well after the war?

Two groups did spectacularly. First, the Baptists: They had existed in relatively small, out-of-the-way groups in the colonial period. After the war, particularly in the mid-South, the South, and on the frontier of the Middle Colonies, the fiercely independent Baptists exploded.

Second, the Methodists, who grew even faster: Methodists were a movement within Anglicanism before the war and had only a handful of members when the war started. Most Methodist ministers, like Francis Asbury, were, in effect, sequestered during the war. Afterwards, the Methodist combination of firm leadership and pioneering attention to ordinary life led to spectacular growth. By 1830 they were the largest denomination in the U. S.

A millenarian passion—the belief that in America God was creating a new order in which his principles would rule—helped justify independence. How long did that passion last?

There were spikes and valleys during the war. During the enthusiastic early years, especially after victories over the British, it was high. But as the war dragged on into the 1780s, confidence in the coming kingdom declined.

After the Constitution was approved, a few important public voices still spoke in such terms. Elias Boudinot, the first president of Congress (under the Articles of Confederation) and an ardent Christian layman, preached a sermon in the early 1790s in which he said that what had happened in the U.S. was probably leading to the glorious end when the rule of Christ would sweep from shore to shore.

That sentiment, however, declined rapidly when the Democratic Republicans under Jefferson replaced Federalists Washington and Adams. Then we see the opposite—a kind of apocalypticism, in which evangelicals especially feared that Jefferson would lead the nation into another godless and bloody French Revolution. To these Christians, the end of the age would come not as freedom spread out from shore to shore but first as a torrent of evil, in a kind of premillennial judgment.

By the time of the Constitutional Convention, were religious concerns still vital?

Only minimally. Some Christians were concerned that God was not mentioned in the Constitution, but others rejoiced over that fact! Some insisted upon a Bill of Rights that would protect religious freedom; some orthodox, evangelical Christians were not worried about this at all. Overall, explicitly Christian matters were not a concern in 1787–89 as they had been in 1775.

Today many people hotly debate our nation’s philosophical origins, whether they were Christian or rationalist, communal or individualistic. Why the near-religious passion about a historical question?

Where do you stand in these debates?

I find myself troubled by them because the modern discussion is almost always simpler than the historical reality of the 1770s. My own feeling is that almost all of these ideologies contributed to the American Revolution—with different weight, different effects, and in different regions—and most historians agree. It is the historian’s job to sort out the relative importance of these influences.

The historical task and the contemporary task are related but separate. Modern debates are concerned about what America should be like today. The historian tries to discover what beliefs energized independence back then. The American Revolution at best can only advise us about modern questions. We are under no moral or historical obligation to continue the American experiment based on the founding fathers’ vision, whatever it might have been. On the other hand, as we debate today, we would be foolish to shut our ears to the voice of history.

I thought this through at some length during the bicentennial years, 1975–76, when many Christians were asking that question. I came to the conclusion that on classic just-war standards, the American Revolution did not qualify. The British did indeed clamp down economically and politically in the 1770s, but it’s also pretty clear that Americans were not sufficiently oppressed to justify taking up arms. In fact, despite the many restrictions placed upon them by the British, they were still one of the freest people on the face of the earth.

But this modern discussion is a bit academic because at the time only a few believers spoke about the war in just-war terms. Furthermore, despite my belief now that the war was not just, had I lived then, my American context and evangelical convictions would have swept me up into the patriotic cause.

How has studying the Revolution for some 25 years made a difference in your personal faith?

First, it has reminded me of how powerful, for good and for ill, religious motives can be in certain political circumstances. There’s no doubt that Christian reasoning and emotion added tremendously to the drive for American independence. I believe that Christian energy was for the most part understandable, and Christian support for the war gave the churches an opening with Americans that their counterparts in Europe soon lost.

Second and more sobering, I’ve seen the damage done to Christian faith when there is a confusion between loyalties. In some instances, on both the British and American sides, loyalty to the political cause was equated with loyalty to Christ. That type of political foundation can never be as deep, as broad, or as important as the bond that unites believers in Christ. Today it is still all too easy to subordinate my faith in Christ to political or social convictions. Studying the Revolution has helped me remember that I should be loyal to different things in different ways, and that my deepest loyalty should always belong to Christ. 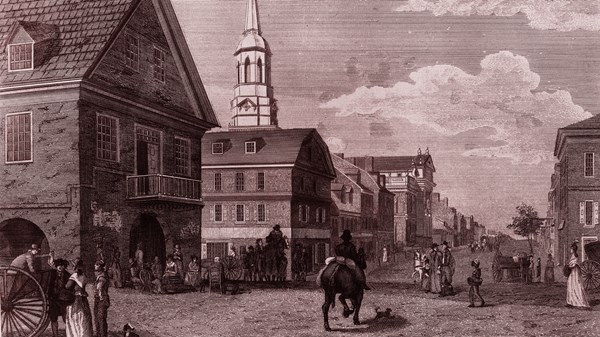