"Hudson Taylor makes extraordinarily ample use of the services of unmarried ladies," wrote a German missionary in 1898, adding that he thought the idea "unbecoming and repellent."

He was not alone—many missionary societies severely criticized the idea of sending single females to the mission field. But by 1898, the tidal wave of evangelical missions was sweeping away strict gender roles. The Women's Missionary Movement, begun in America in the early 1860s, had already given birth to 40 "female agencies"—mission societies that sponsored only single women. Barred from ordained ministry in their homeland, hundreds of women eagerly volunteered to serve abroad.

A large measure of this change can be attributed to the policy of Hudson Taylor. Women were vital to the China Inland Mission from its inception. In 1878, he took a much criticized step in permitting single female missionaries to work in teams in the interior of China. By 1882, less than 20 years after its founding, the CIM already listed 56 wives and 95 single women engaged in ministry.

Women labored sacrificially and with distinction in virtually every capacity of Taylor's mission. The following stories represent the thousands of women who volunteered for missionary service in China.

Most of the single women missionaries in the CIM worked with a female partner or on teams that included married couples. But some struck out independently.

Annie Royle Taylor (no relation to Hudson), who arrived in China in 1884, was described as "the lone wolf" and an "individualist, so bad at harmonious relationships with colleagues that she would have to be returned to Britain or stretched to her own limits." She chose the latter option and set her sights on bringing the gospel to the forbidden city of Lhasa in the heart of Tibet.

She faced many obstacles and setbacks, and Taylor wrote in 1890 of "dear Annie Taylor [having] a very hard time of it." But she did not give up easily. By 1892 she was ready to make the thousand-mile journey into Tibet with her Tibetan convert, Pontso, a Chinese man and his Tibetan wife, and two other men to help with her 16 saddle and pack horses. She adopted native Tibetan dress and shaved her head in the fashion of a Tibetan nun.

Taylor's party faced one obstacle after another. Bandits stole their tent and clothing and killed most of their animals. One of the workmen died, another turned back. The Chinese man demanded money, and when that was refused, he brought accusations against her to Tibetan authorities that led to her arrest. Yet, according to A. J. Broomhall, "she kept a daily dairy, never complained in it, and gamely made a Christmas pudding with the currants and black sugar, flour and suet she had brought with her."

Taylor met face to face with the government officials who arrested her, but the confrontation ended with an escort, horses, and provisions for her to continue her journey. After more setbacks, Taylor finally established her own agency, the Tibetan Pioneer Mission, and soon 14 candidates from London arrived to help her in 1894.

In less than a year, however, the infant mission was in shambles. The new missionaries repudiated her leadership and called on the CIM for assistance. Taylor would not be deterred. She wrote back to London asking for female recruits because, "the Tibetans respect women and do not even in time of war attack them."

"The Trio," as they became known, began their work in China around the turn of the century. After more than 20 years of doing routine missionary work in China, Mildred Cable and Eva and Francesca French were convinced God was calling them to China's great Northwest—to the Gobi Desert and beyond. Many of their colleagues were shocked. In the words of Cable, "Some wrote, saying in more or less parliamentary language, that there were no fools like old fools."

The Trio would not be deterred. They traveled for months by ox cart before arriving at the City of the Prodigals—the last city inside the Great Wall, named for its reputation for attracting criminals. Here they set up a base where they spent winters. The remaining eight months of the year they evangelized, traveling the vast trade routes of the Gobi Desert. They stopped at every settlement, timing their visits with festivals and fairs, where they preached the gospel and passed out tracts.

More than once, they were assailed by bandits and caught up in local wars, but their most persistent enemy was the weather. Once they were on the Gobi Desert during Easter week when the warm spring breezes suddenly turned into a blinding blizzard. They struggled to set up their tent and start a dung fire amidst the blowing snow and sand. That accomplished, they boiled water for the hot-water bottle, but as it was handed to Eva, it burst open, scalding her shivering body. The other two tended her burns, but the incident was ever a reminder of the cost of frontier evangelism.

Using single women in ministry, however, was not without its complications. Early on Hudson Taylor was publicly criticized for his close relationship with two single missionaries, Jennie Faulding and Emily Blatchley, after which he kept his distance—to Blatchley's regret:

"I am so lonely, so utterly alone," she wrote in her journal. "But why should I cling so? Oh, Christ, take hold of my hands . …I find such joy in being with the Taylors, but I must not let it intoxicate me."

Not long after she penned these lines, Blatchley volunteered to accompany the Taylor children who were returning to England for schooling. Soon after they left, Maria, Taylor's first wife, died in child birth. The next year, Taylor set sail for England to visit his children—and, Blatchley hoped, to marry her. But it was not to be. Jennie accompanied Taylor on the voyage, and when they arrived in England, they were engaged.

Blatchley was devastated. "I feel sure from what I know of my own nature that I should, if I had had the chance, have been Mrs.," she painfully wrote in her journal. "And so it is in love and mercy my God cut off my flowing stream at which He perhaps saw I should drink too deeply. Such a sweet, sweet stream, such a painful weaning! Therefore such a great blessing must await me for Jesus to bear to see me have so much pain." She died of tuberculosis not long after the wedding.

Hudson Taylor did not make a distinction between married and single women. He expected married women to focus primarily on ministry, even as their single sisters did. To a male recruit he wrote, "Unless you intend your wife to be a true missionary, not merely a wife, homemaker, and friend, do not join us."

Maria set the pace for other married women in the mission. Despite caring for five children, she was active in the ministry—reaching out to Chinese women and serving as first lady of the China Inland Mission. Souls were dying without the gospel, and no one in the mission was exempt from active duty.

Jennie was also active, balancing ministry with the care of Taylor's growing children (from his marriage with Maria) and more children of their own. Once when Taylor was ill while they were in England, she returned to China alone to carry out needed refugee work, leaving the children behind in his care.

Yet besides his own wives' examples, there were others, like that of Isobel Kuhn. Kuhn's appointment as a missionary had initially been delayed because she was described by one person as "proud, disobedient, and likely to be a troublemaker." But after two years on probationary status, she sailed for China in 1928 as a single woman. As soon as her language study was completed, she married fellow missionary John Kuhn whom she had known as a student at Moody Bible Institute.

They were both strong willed and endured many difficulties and personality clashes early in their marriage. More than once, Isobel stormed out of their house in anger. One of Kuhn's many contributions to missionary literature was her openness about the marital struggles she and her husband John faced when living alone in a remote area.

For 20 years, Isobel and John worked among the Lisu, a minority people in the far western province of Yunnan. When they were forced to leave the area due to violent guerrilla warfare in 1950, they re-located in Thailand. After barely two years of ministry in Thailand, Isobel was diagnosed with breast cancer. She wrote three more books before she died in 1957, leaving behind a husband, a daughter and a son—and eight books and many articles that depicted missionary work and life in an honest and refreshing light.

Mrs. Arthur Smith, another China missionary, censured any work of single women that involved them in "lawless prancing all over the mission lot." Her target was Lottie Moon, whose work in China would become legendary (see The Gallery, page 34). The proper role of a female missionary, Smith argued, was to attend "with a quivering lip" her own children.

Not so, said Taylor and the "unbecoming" women of the China Inland Mission, both single and married. And missions in China never looked the same after they said it.

Ruth Tucker is a member of the Christian History advisory board and the author of many books, including, From Jerusalem to Irian Jaya: A Biographical History of Christian Missions (Zondervan, 1983). 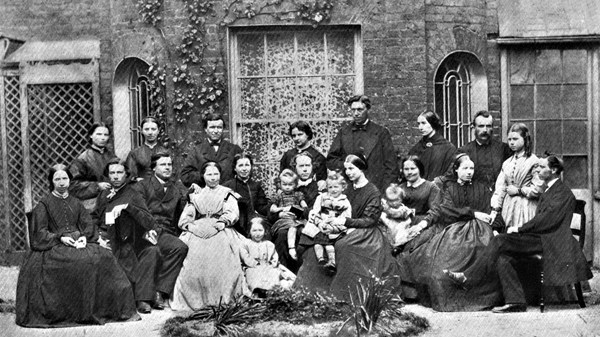