The story of Erik the Red, his son Leif (the famous explorer) and the most misnamed of Viking Islands
Roger McKnight

"Are you intending to sail to Greenland this summer?" Norway's King Olaf Trygvesson asked Leif Eriksson, whose father had founded the island colony.

"I think it would be a good idea. You are to go there with a mission from me, to preach Christianity in Greenland," said the king credited with the conversions of Norway, Iceland, Orkney, Shetland, and the Faroes. "Your good luck will see you through."

But on his way home Leif was blown off course, landing far southwest of Greenland, in a land now known as Newfoundland.

So says Erik's Saga, which, like other such stories, is part truth and part fiction. What is known is that the story surrounding Erik the Red and his son Leif Eriksson (or "Leif the Lucky") spans many generations. It begins during the ninth century with political violence in Norway and ends in fifteenth-century Greenland as one of the unsolved mysteries of medieval Europe.

Erik and Leif traced their origins back to Norway and Iceland. After a series of bloody campaigns, the ninth-century Norwegian King Harald Fairhair consolidated all of Norway under his rule. Unwilling to submit to Harald's authority, provincial rulers and district strongmen emigrated to establish farming settlements in Iceland. Though formally devoted to the rule of law, these Icelandic farmers were often governed by relentless family feuds and their own violent passions.

In the late tenth century, Erik the Red and his father, Thorvald, left their home in Norway "because of some killings" and settled in Iceland. When Thorvald died, Erik married and established a farm.

Blood troubles soon caught up to them across the Norwegian Sea. As Erik's Saga tells us, Erik's slaves "started a landslide that ...

ConversionInternationalPaganismScandinaviaSyncretismViolence
Issue 63: How the Vikings Took up the Faith, 1999
Previous Article
Conversion of the Vikings: Christian History Interview - Converting By the Sword

Richard Fletcher
Next Article
Sweden: Faith Without the Fireworks 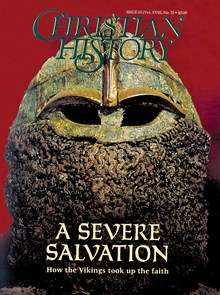 This article is from Issue 63 of the Christian History archive.